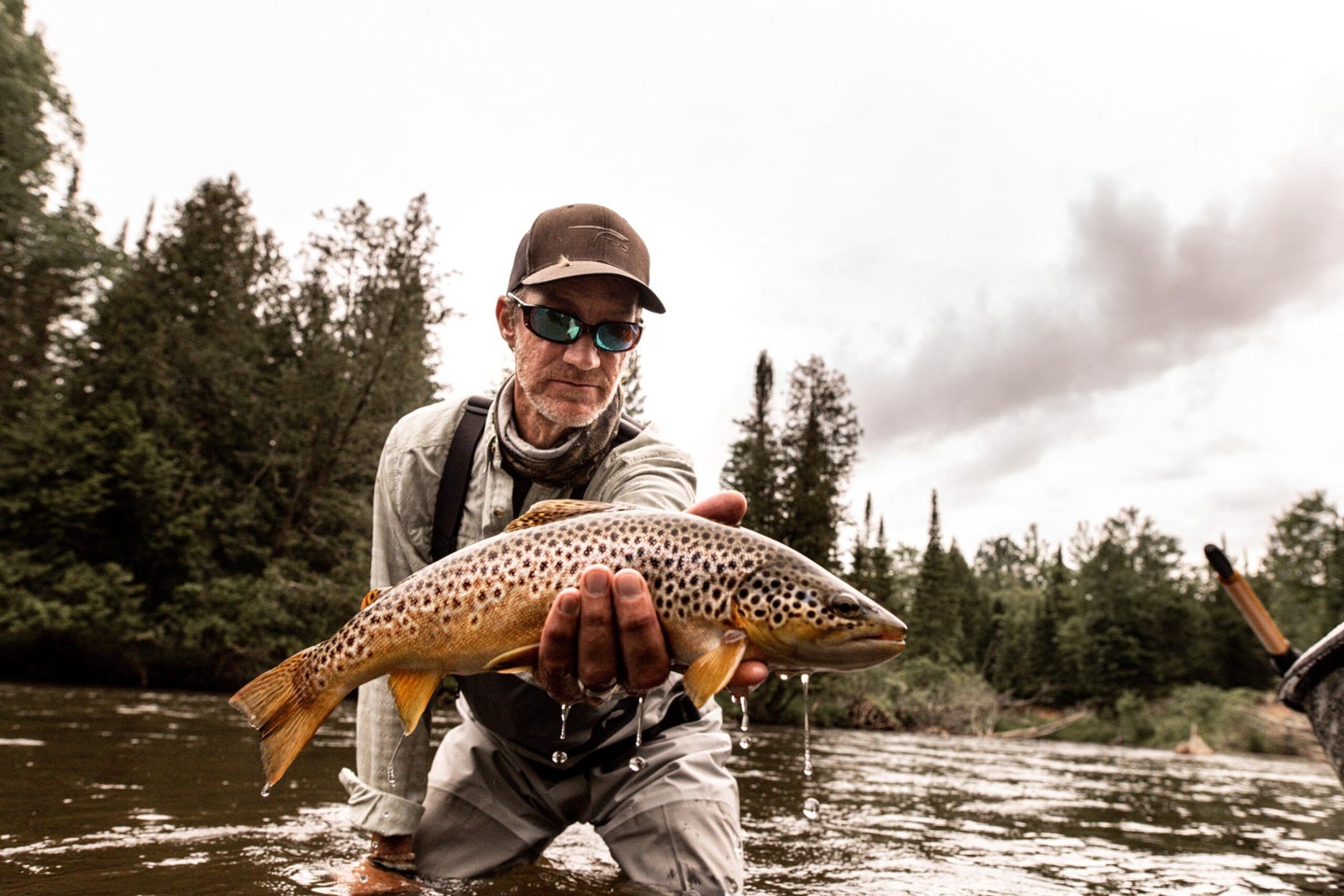 Perhaps no outdoor enthusiast feels the summer doldrums as keenly as a trout fisher. The robust fishing of spring is just a memory, and the bracing renewal of fall is still weeks away. The creek that brimmed with rising trout in May is listless and low. In fact, fishing in the warm water of late summer can be bad for the resource: Even if you can get a trout to bite, it may not survive being caught and released.

But trout guides know how to find good trout action during the lazy, hazy days. “I still fish for trout a lot in late summer,” says Zach Brantley, whose guide service, Blue Ridge Fish Adventures, is based in Rockbridge Baths, Virginia. “Obviously finding appropriate water is the No. 1 step. I’m really never going to fish for trout above 68 degrees (water temperature), but you can find other options.”

Here are some ideas from guides on how to salvage an otherwise dull chunk of the calendar.

1) Turn to the Tailwaters for Summertime Trout

Tailwaters, also known as tailraces, are rivers downstream of deep impoundments that are kept cold by water released from the dams. From the Swift in Massachusetts to the Lower Sacramento in California to the mighty White in the Ozarks, tailwaters provide cold-water environments on rivers that would otherwise be shallow, warm, and trout-unfriendly. Not only do the conditions keep the trout frisky, they often provide spring-like mayfly hatches right through the summer.

As Brantley notes, the ways the rivers are managed can impact the fishing, but most tailwaters are fishable at least some of the time in late summer. Tailwaters tend to produce prolific hatches of small mayflies, and their trout tend to refuse flies that don’t imitate the real thing. Fly-fishers are often humbled by the fussiness, but at least they have healthy, rising fish. Local fly shops usually post suggestions about what may be hatching and what flies to use.

Tailwater rivers can get crowded when all the other streams are low and warm. But if you’re willing to walk up or downstream from the parking areas, you can find more room to fish, and trout that haven’t been cast over all day.

2) Move Upstream for the Coldest Water

Even tailwater streams are subject to warming during really hot weather. The water may be cold when it is released from the dam, but as it progresses downstream, the temps go up. If your first-choice spot has a borderline reading on your stream thermometer, try relocating upstream. “The less time that water’s had to sit in the sun, the better chance it’ll be fishable,” notes Chris Galvin of Galvin Guiding in Denver.

Here’s a good example. As I write this on a warm day in July, the temperature of the West Branch of the Delaware River where it’s released from Cannonsville Reservoir is a chilly 51 degrees. At Lordville, 22 miles away from the dam, the water was an unfishable 71 degrees. These readings come from the U.S. Geological Survey’s water data website, which lists real-time flows and, in many cases, temperatures of rivers across the country. It’s a big help for late-summer fishing.

3) Get an Early Start to Beat The Heat

Everyone enjoys the evening hatch, when emerging insects and spinner falls (mating swarms) put trout on the feed. But it’s a mistake to think that water cools rapidly as the sun goes down. Water that was warm at 6 p.m. will still be warm at 9 p.m., and probably later. You will find much better conditions in the morning.

“Take advantage of the overnight cooling,” Galvin advises. Summer trout are at their most vigorous at daybreak—and first light is a great time to pursue most kinds of fish, at any time of year. You’ll have more water to yourself, since not many people are willing to make the effort, and you may well find a hatch or spinner fall in progress. The much-anticipated Trico hatch, for example, takes place first thing in the morning. (Make sure you have fine tippet and tiny flies for this important hatch.)

4) Or, Fish the Late Shift to Find Bigger Trout

Any river that’s fishable during the day can provide some serious excitement at night—not because the water is cooler, but because night is when the big fish like to feed.

“Most of your big fish are going to switch nocturnal, at least here in the northeast,” says Derrick Kirkpatrick, owner of CT Fish Guides, president of the Farmington River Anglers Association, and host of the Catching Alphas podcast. “We’ve seen those fish eat baby ducks on the river. You see some crazy stuff where these alpha brown trout, that go unhooked throughout the year, feed in a way that other fish don’t.”

The fishing isn’t all that technical, but night fishing requires considerable prep. It’s best in a spot that you’ve gotten familiar with in daylight. You’ll need to know where you can park after hours. And a bright light—say, 1000 lumens—is handy to see what you’re doing, and to scare away beavers or bears.

If you have access to spring creeks, count yourself lucky. No public works projects here—these rivers have year-round groundwater flows with temperatures that are comfortable for trout in the summer (and are often fishable in winter.) Like many tailwaters, spring creeks hold bug-sized crustaceans like scuds and sow bugs, essentially freshwater shrimp that are easily imitated with simple patterns on a natural drift. They also tend to have nutrient-rich water that supports great populations of mayflies and caddis.

Spring creeks tend to be weedy with flowing green plants like elodea and watercress. This vegetation provides a sanctuary for trout and habitat for aquatic insects and crustaceans, but it can also make the fishing tricky. By summer’s end, the fishable water of many spring creeks is reduced to narrow runs between the greens.

“Try floating dry-dropper rigs down the little channels,” Brantley recommends. The dry fly may do the trick, and will also suspend the sunken fly above the weeds.

6) Look for Trout in Lakes, Ponds, and Reservoirs

Stillwaters are subject to the summer’s heat, too, but mostly near the surface. The deeper water provides a refuge, from which trout can venture out to feed.

Stillwater fishing can be dry-fly fishing, often for caddis flies or stillwater mayflies such as callibaetis, or, close to the shore, beetles and ants.  Of course, on a stream, the current sets the tempo; when you cast a dry fly on a lake, it will stay put until a fish bites or you lift it to recast. How long should you wait? “It could be two to five minutes, depending how patient you can be,” says Chris Galvin. “Let it drift with the wind. And keep your rod tip down near the water for the most direct contact. A slack line from holding your rod tip up causes lots of lost fish.”

Subsurface fishing is always an option, too, regardless of what is or isn’t happening at the surface. Galvin recommends balanced flies, a style that has seen a resurgence lately among Stillwater anglers. Tied on a jig hook, a balanced leech or wet fly features a heavy bead positioned forward of the eye. Standard beadhead nymphs or streamers hang almost vertically in the water, while balanced flies lie horizontally, the way most aquatic creatures swim. Suspended under a suitably buoyant strike indicator, a balanced leech pattern will move gently in response to waves or wind affecting the indicator on the surface.

Nymphs, wet flies, and leech patterns are always good bets, but so are streamer patterns. Just about all fish eat smaller fish. Your floating fly line will work, but you’ll find it easier to get a fly down deep with a line that’s made for the job. A sink-tip or full-sinking line works wonders, but Galvin finds a 1.5”-per-second intermediate line the most useful. A clear-tipped line is nice, but not mandatory. “You can run an 8- or 10-foot leader, and the fish don’t seem to care,” he says.

7) No Hatch? Try a Terrestrial Pattern to Catch Trout on the Surface

There are certainly mayflies, caddis flies, and stoneflies that hatch right through the summer months and into the fall. But there are nowhere near as many as in the early summer and spring. But you can enjoy plenty of dry-fly action with terrestrials—floating flies that imitate land-based bugs such as beetles, ants, and hoppers.

“Pay attention to the bankside vegetation,” Galvin says. That’s where terrestrial insects belong, even though some wind up in the water by accident, and observing streamside brush will tell you what’s on the menu.

In case the trout are not inclined to grab a terrestrial from the surface, consider dangling a subsurface fly below it. “If I’m searching or prospecting, I’ll do a lot of dry-droppers,” Zach Brantley says. “We have a ton of terrestrials, especially when it’s dry and windy—grasshoppers, crickets, flying ants, Japanese beetles.” All are common just about everywhere, and all are protein-rich trout snacks.

High-elevation brook trout streams tend to be shady and cooler than the bigger rivers down in the valley—and they can offer an exquisite fly-fishing experience.

“Our local brookie stream is 59 degrees, and it numbs you to the core in minutes,” says Boyne City, Michigan guide, sales rep, writer, and advocate Brian Kozminski. There Kozminski says the brook trout average 9 to 10 inches but an occasional 12- or 14-inch fish can catch you off guard.

“Short, tight roll casts are essential on small mountain streams, so work on casting before showing up and discovering the futility of a backcast,” he says. “Late summer, and early fall can be very rewarding for those looking to discover some thin blue lines, so do yourself a favor and explore. It makes you feel like a 12-year-old on a summer day.”