“Extinction Is What We Are Talking About.” Ongoing Drought Is Killing Oregon Salmon

Unprecedented drought conditions have caused massive fish kills on Klamath River Basin, and it's only getting worse 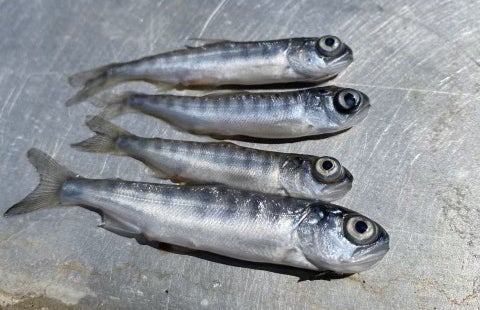 A lack of water in Oregon’s Klamath River has resulted in a massive fish kill, threatening one of the country’s best-known salmon fisheries.

The water shortage has been an ongoing issue as last summer’s drought was followed by a dry winter. The situation worsened due to light spring rains and hotter-than-normal temperatures. Already-low river levels decreased even more due to the region’s heavy use by agricultural irrigators throughout the entire Klamath River Basin. Changes have been instituted to preserve the river’s water as irrigators typically require 400,000 acre-feet of water and will now have to make due on a scant 33,000 acre-feet, a historic low since the operation began in 1907.

But is it too late?

Hot, low water has a devastating effect on young salmon and makes fish more susceptible to disease. Dead juvenile salmon began appearing on the Klamath in early May, and the fatalities have steadily increased since. An estimated 97 percent had C. shasta disease, an infection caused by a parasite. It’s all the result of one of the area’s worse droughts in 40 years.

Historically speaking, wet years had been the norm in the Klamath River Basin, but that has changed, particularly since 2014, according to Barry McCovey, Jr., the Yurok Fisheries Department director. Speaking to the High Country News, he said, “Good water years where there’s plenty of water to satisfy all the needs of the basin are rare now.”

Frankie Myers, the Vice Chairman of the Yurok Fisheries Department’s fish disease monitoring team said, “For salmon people, a juvenile fish kill is an absolute worst-case scenario.” A juvenile fish kill can completely set back the commercial fishing industry. Ladder in the fact that drought negatively impacts the region’s agricultural businesses, and it’s a terrible situation. Klamath Irrigation District President Ty Kliewer told the High Country News, “This just couldn’t be worse. The impact to our family farms and these rural communities will be off the scale.”

Klamath River Basin Salmon May Not Survive Another Year Like This

A $57 million relief package has been proposed for agricultural industry workers and nonprofits that service the Klamath River Basin. Other requests have come from tribal leaders and commercial fishermen. While that distribution could certainly bolster the region’s businesses, the environmental setbacks will be felt for decades.

With no rain through July, an already bad situation has gotten worse. “There’s water allocated that doesn’t even exist,” Jamie Holt, the lead fisheries technician for the Yurok Tribe told the Associated Press. “This is all unprecedented… When do you start having the larger conversation of complete unsustainability? When I first started this job 23 years ago, extinction was never a part of the conversation,” she said of the salmon, in the AP story. “If we have another year like we’re seeing now, extinction is what we’re talking about.”

A 2002 fish kill resulted in the loss of 60,000 adult chinook salmon, which never migrated to the ocean and never had the chance to return to spawn. “Everyone’s going to keep on suffering if we don’t come up with a plan that works moving forward,” McCovey said. “And we don’t have much time left.”