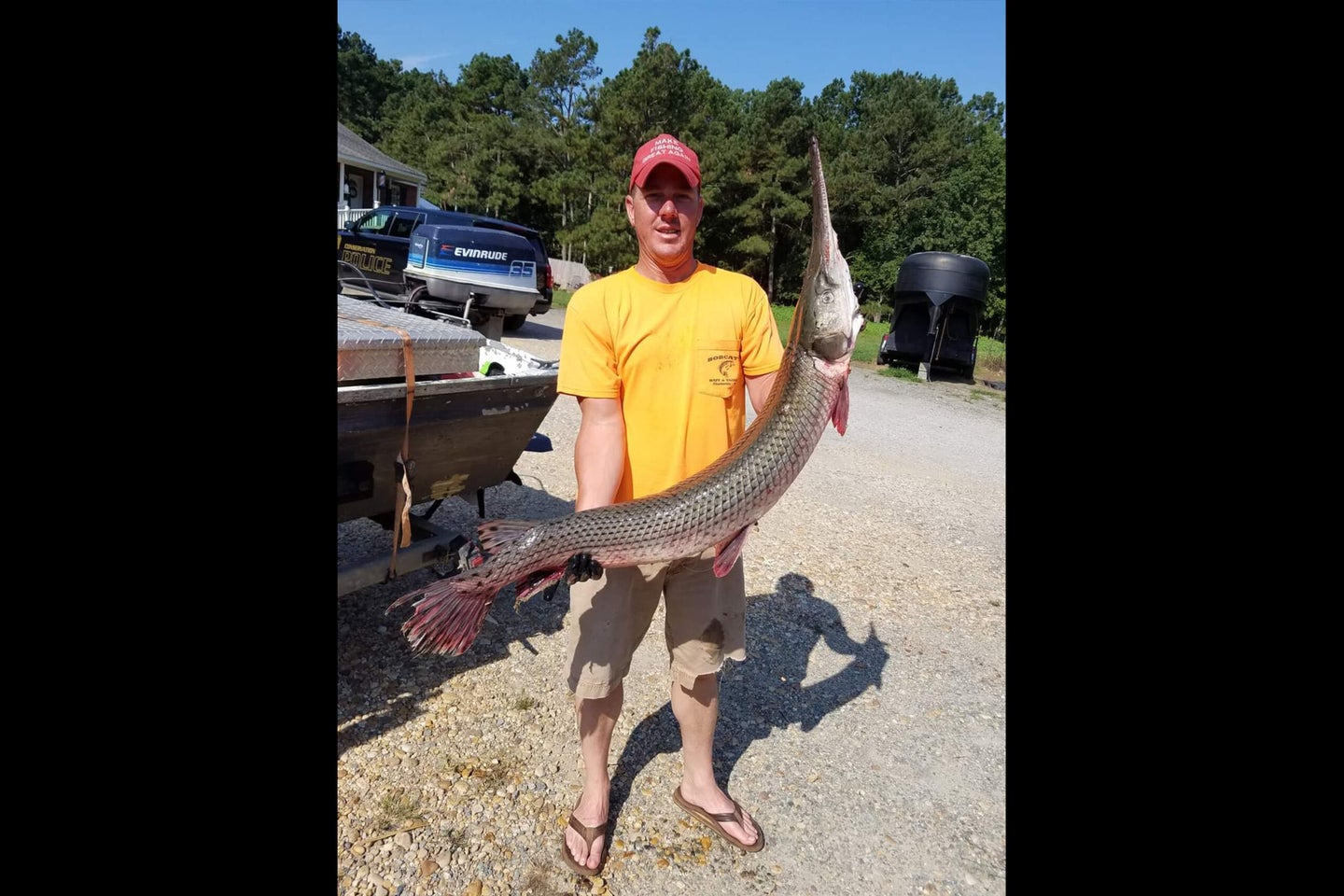 Kennedy arrowed the gar while on a fishing trip with his stepdaughter. Shawn Kennedy
SHARE

Shawn Kennedy struck paydirt at midnight when he put an arrow into a massive longnose gar on the Pamunkey River. He was fishing with his 18-year-old stepdaughter when two big shadows swam toward his jon boat. Kennedy left what looked like the larger fish for his stepdaughter, but she didn’t have time to get a shot off before it swam beneath the boat. Kennedy put his arrow into the second shadow—and ended up boating the archery state record gar.

“Once I got it up next to the boat, I realized how big it was,” says Kennedy. “I was like ‘wow!’ I have a 55-gallon drum that I put my catch in. I knew right away that it wasn’t going to fit in there. It was bigger than any I’d gotten before.”

The fish was 4 feet, 6 inches long and had a girth of 17 1/2 inches. It weighed 23 pounds and easily bested the previous archery state record, which was a 21-pound, 13-ounce longnose gar that was captured from Lake Gaston in 2019. Kennedy was in the right place at the right time, partly because of adverse weather conditions elsewhere.

“There were storms all over the area that night,” says Kennedy. “It didn’t look like the storms were predicted to come down the Pamunkey. I didn’t really know that river very well. I wanted to just explore it and head in a new direction on it.”

The Record Gar Was a Testatment to Several Years of Dedication

Kennedy started bowfishing in 2018 after getting skunked one too many times. He had a hard time getting bites on conventional tackle but had gar porpoising around him. Towards the end of that summer, he decided to buy a bowfishing boat which he fixed up and put on the water in 2019. Kennedy currently works at a scrap-metal yard and spent 12 years in the Marine Corps before that. He gets out bowfishing about once a month, which is not as often as he’d like.

“You’re constantly moving,” he says. “Most other times if you’re fishing, you’re just sitting there. But with bowfishing, you cruise through creeks and are constantly exploring. You’ve got lights on the boat at night, and you see beavers, turtles, and all kinds of different aquatic life.”

Kennedy particularly likes targeting longnose gar, which are distinctive for their long, beak-like mouth. “I knew all the tales that they’re a trash fish and eat up more fish than their body weight,” he says. “But they’re actually pretty cool. I’ve heard that Native Americans used their scales and skins for body armor.”

“And their scales can be razor-sharp,” he adds. “I learned that on the first one I ever got on a boat. I was in shorts and sandals, and I thought because it had an arrow in it, and it was flopping around, that all the blood I was seeing was from the fish. I put my legs in the water to wash them off, and the blood came right back. I was like, ‘well, I guess I’m the one bleeding.'”

Kennedy typically eats the gar that he shoots and equates the fish’s meat to the tenderloin of a deer. But he donated his record to the Virginia DWR. A state biologist plans to analyze the dead fish for toxins, age, dietary habits, and more. The agency has never had the chance to study a fish that size. Kennedy, for his part, says he’s seen bigger gar before but just wasn’t able to connect. He also wonders about the bigger-looking fish that he saw swimming alongside his state record.

“Your heart rate gets up when you see them, and you miss most of the time. Then the fish is gone,” he says. “I went ahead and took a chance. You miss every shot you don’t take, anyway.”