Pickles are fun to make at home, and they go great with a variety of wild game recipes. Dill pickles... 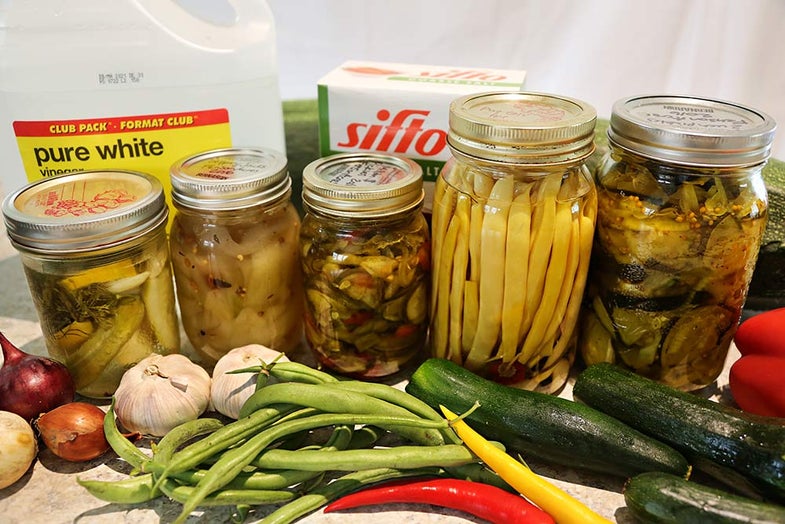 Homemade pickles make for a great side to wild game. Brad Fenson
SHARE

Pickles are fun to make at home, and they go great with a variety of wild game recipes. Dill pickles are the obvious go-to pickle recipe—and for good reason: They’re delicious. But in case you’re game to try something new, here are some different—and delicious—pickle recipes to kick up your hunting or fishing sandwiches for when you head afield.

Before we begin, here are a few helpful tips that apply to pickling in general:

The sweet brine, with a hint of turmeric and mustard, sets the stage for these crisp pickles, where you hunt for a cucumber, onion, and pepper in every bite. Sweet and tangy with a bit of a crunch, this pickle makes a great hot dog and burger topping, or even an accompaniment to steak. Try these with your next venison roast, and you might just have a new favorite wild-game condiment.

If you’ve ever picked cucumbers, you know there are always a few that manage to hide and grow large and yellow. This recipe makes good use of those large, overgrown cukes to create the most unique pickle in our pantry. The pickles take a week to make, but require little of your daily time. Treatments of boiling water turn the cucumbers almost translucent, but they still manage to maintain a satisfying snap. When eaten as a side with venison sausage, don’t be surprised if you empty the jar.

Zucchini get a bad rap from lots of folks, who often use them in cake or a pot of chili to hide the overgrown vegetable from a discerning palate. Embrace the zucchini and turn them into pickles with sweet or yellow onions. You won’t believe how they develop a crisp bite, making them ideal for a topping or a side dish with dinner. Cold venison roast or meatloaf sandwiches were made for these pickles.

If you like dill pickles, you’re going to love these beans. They can be eaten on their own or used as a stir stick in your next Bloody Mary. Hate guessing how many jars of pickles your garden crop will make? I find it easier to mix up a whole batch of brine and store it in a jug to have on hand at a moment’s notice. That way, you can make up a smaller number of jars whenever the mood strikes and the brine will be ready and waiting. Pickle the beans as they are ready in your garden by reheating the brine.

Ingredients (for each quart jar)

If you’ve ever visited a Mediterranean market, these pickles might cause flashback. Grape and cherry leaves add flavor, and the mix of vegetables changes in ratio every time a new batch is prepared. This is a quick and easy recipe to make, with no processing, and you can start eating them within a few days. Of course, the longer you leave them, the more flavor the brine creates. Mix up a batch of brine and store it in a jug to have on hand at a moment’s notice, allowing you to make one or more jars whenever you have ingredients to fill a pint or quart jar.

Ingredients (for each pint jar)