A little something for everyone, from a slick new AR tool kit to a top-of-the-line bushcrafting blade 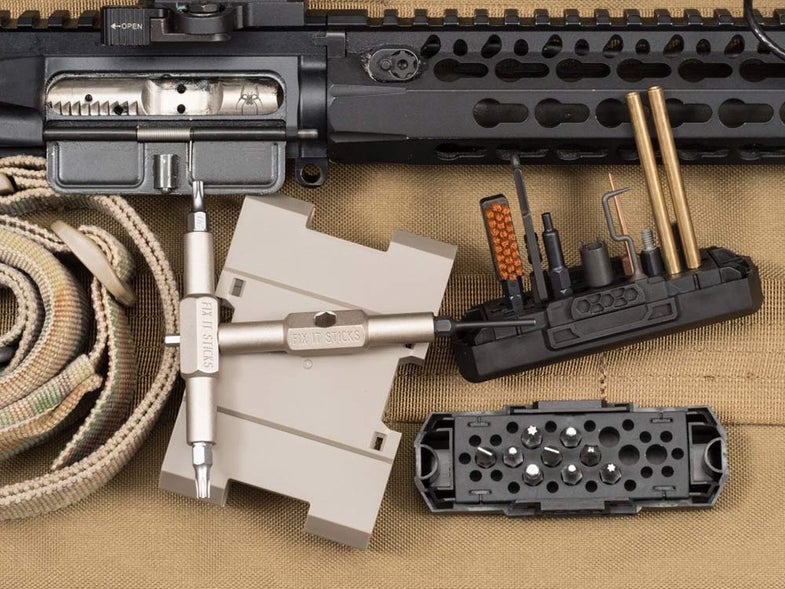 A specialized took kit for you AR-15. Fix It Sticks
SHARE

Spring is here. Porcupines are grazing in the fields, growing new quills with which to educate ignorant dogs. Black flies are back in business. And new gear continues to surface like Right whales in the Gulf of Maine. Here is a collection of useful stuff that has filtered in since the SHOT Show..

These are very light and comfortable, block 99 percent of UV rays, are anti-fog coated, have passed military Ballistic High Velocity Impact tests, and come in a variety of cool colors. What else could you want? I wear glasses whenever I shoot, including when I hunt, having been poked in the eye four times in my career. Most ranges now ask you to get off the firing line if you don’t have sense enough to wear glasses. I’ve seen them as low as $20 online.

At this late date, do I need to re-introduce you to Work Sharp? Of course not. Their latest is a minimalist sharpener designed for pocketknives, or any knife with a blade that’s 3 inches or less. It consists of a medium-grit diamond plate and a ceramic rod, plus bevel guides for the plate, and it’ll put a fearsome edge on a blade with no edge at all in a few strokes. It’s almost small enough to fit in your shirt pocket. The little fellow will go on sale around the end of May, or Father’s Day, or about the time the blackflies die out in Maine. It’s $14.95.

As anyone who owns and runs an AR knows, the black guns require care, maintenance, and adjustment. That’s part of their charm. The problem is that a lot of the tools required are pretty specialized. In light of this, Fix It Sticks has whomped up a dedicated AR-15 Tool Kit that comes in a small hard case and contains just about everything you’ll ever need, and all for $90.

Last November I went into the woods of northern Maine and started a campfire in a wet-snow storm using a Stormproof Sweetfire Firestarter. These things are made from ground-up sugarcane and have a starter tip comprised of furiously incendiary chemicals. You strike one of these things and they burn, son.

Now we have the same thing in a Behemoth size, which is twice as big as standard, and is supposed to burn for 15 minutes, as opposed to 7 for the regular. I tried it out on a day with 25 mph wind gusts after two days of rain, so everything was nice and wet. The Behemoth did not burn for 15 minutes; it burned for 8, but that was more than enough. It produces a flame almost big enough to roast an ox, and I had a fire going in three minutes. A package of three, including strikers, is just under $5.

At the 2017 SHOT Show, Morakniv introduced its Garberg model, which is their top-of-the-line heavy-duty survival/bushcrafting knife. It came with a high-grade-stainless blade, but traditionalists insisted on a tool-steel version as an option. Here it is. The new Garberg blade sharpens with ridiculous ease and is given a handsome black coating to keep it from rusting. (I keep mine on my workbench, where it is damp, and I keep the edge oiled.)

This is a paragon among bushcrafting/survival knives, which is no surprise, because Mora has been in the cutlery business since 1891, and got the hang of it quite some time ago. The price is $106. (When Morakniv introduced the Garberg, they were embarrassed at how much they had to charge for it. I thought that was touching, and told them they had nothing to worry about.)