Run-and-gun turkey hunting is one of the most effective ways to tag a springtime tom. A go-getter attitude will get... 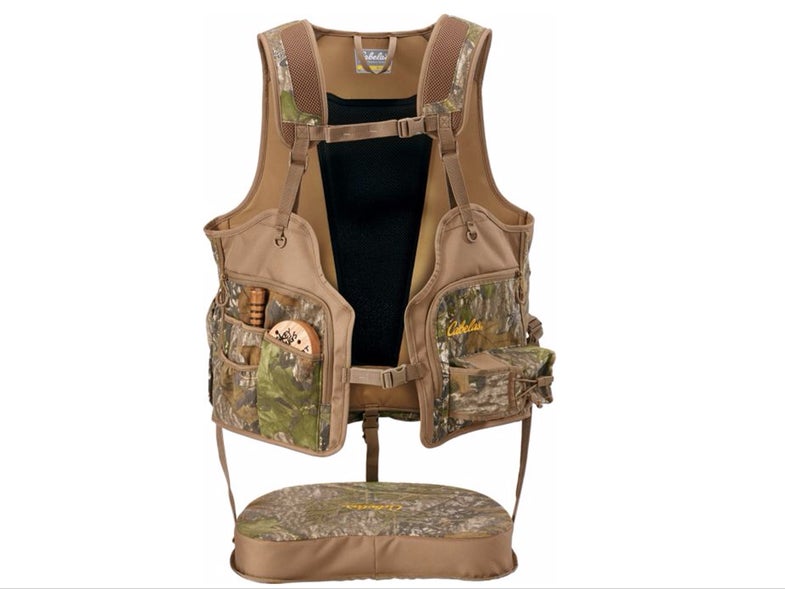 Run-and-gun turkey hunting is one of the most effective ways to tag a springtime tom. A go-getter attitude will get you farther from the crowds and closer to birds that are more likely to fall for your tricks. So, if you’re up for stalking gobblers off the beaten path and not afraid to log some miles in the woods, this is some of the best mobile turkey gear out there.

For active turkey hunters, vests with a heavy seat and dozens of pockets, into which gear always seems to vanish, quickly prove impractical when pursuing gobblers. The Cabela’s Minimalist Turkey Vest is the antithesis of such cumbersome setups. It weighs less than 4 pounds yet has more than enough room to stash accessories, with two large zippered pockets, as well as compartments for a phone, box call, and water bottle. This lightweight, straightforward vest won’t weigh you down on long hikes, and its foam seat is plenty comfortable should you need to stage a long sit.

For years hunters on the go had to choose between either hauling a clumsy decoy or bringing no decoy at all. But the super-efficient Miss Purr-Fect, by Montana Decoy, has completely changed the game. The decoy’s accordion-like body collapses to the size of a dinner plate, so it’s a cinch to carry and set up on the fly. When it comes time to make a stand, just remove the built-in band to unfold and bring the decoy to life. What’s more, the hen is covered in lifelike fabric and has an adjustable neck that’s easy to tweak in the field.

Shotguns made specifically for turkey hunting tend to share a few commonalities: They’re short, heavy, and expensive. That can often leave hunters looking to cut weight in the dark. Some youth-model shotguns, however, offer all the advantages of a dedicated turkey gun but for a fraction of the cost, and with a fraction of the weight. The Mossberg Model 500 Super Bantam, for one, is sized much like other turkey guns, with a 22-inch barrel and 39.75 inches in overall length, yet it weighs a mere 5.25 pounds, which is about 30 percent lighter than most dedicated turkey shotguns. Lock in a Full choke, and combo that with Winchester Long Beard XR 3-inch loads, and you’ll have a lightweight shotgun that can reach gobblers out to 35 yards.

The weather can be unpredictable during turkey season, but the Sitka Core Lightweight Hoody can handle most any condition you’ll encounter. In mild weather, it’s great on its own, and should temperatures drop, it makes for a great base layer, too. It has become a favorite of mine, though, because of its built-in face mask, which is perfect for quick set ups and further reduces the amount of gear you need to bring. Available in Sitka’s new Subalpine camo, with springtime greens and tans, it’ll be sure to fool even the wisest of birds.

It can be nearly impossible to use a traditional ground blind while running-and-gunning for gobblers. Most hubs weigh upward of 15 pounds, and often end up getting awkwardly thrown over a shoulder when you make a move. But this isn’t the case with the Ameristep Throwdown Blind. Perfect for mobile hunters, the blind weighs less than 2 pounds and breaks down to just 21 inches long, making it easy to fit in a vest. Though small enough for easy transport, it’s still big enough to hide multiple hunters once staked into the ground.