Flyfishing: In Search of the Perfect Cast

Some trout strikes are textbook. Other times, you have to get a ­little creative (or lucky) with your ­presentation 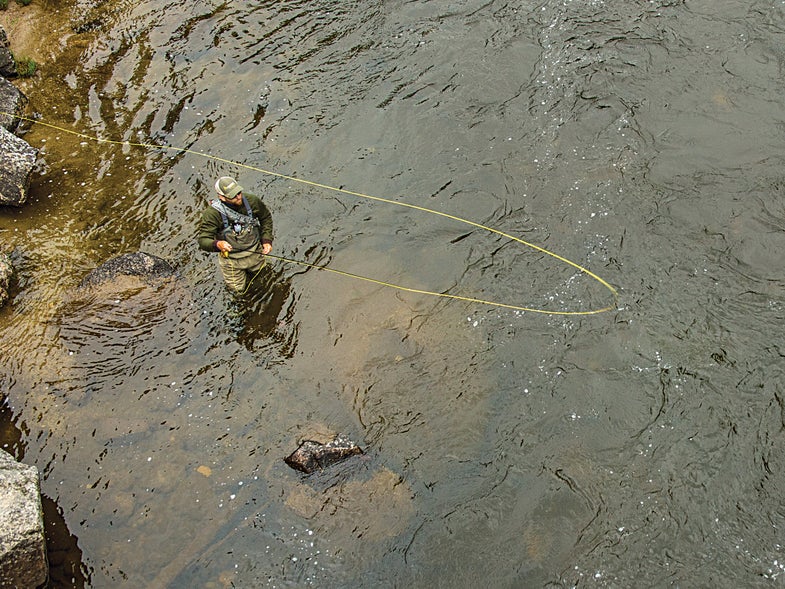 “Shorter!” I pull in another handful of fly line, bite my lip, and make the cast. The small black caddisfly lands 25 feet upstream, bobbles in a riffle, and streams past my wader boots untouched.

“No,” Randy Rice calls out again. My guide is watching from his drift boat, beached on a grassy bar downstream. He’s checked me twice now. “Shorter. It’s like fishing by braille. Little short casts, pop-pop-pop, feeling out the pockets and cutbanks. Cast and creep. Pull in some line. Shorter.”

Rice has guided on the Deschutes River for 33 years, but I’m still not sure about this. I pull in another few strips until there’s barely 3 feet of fly line hanging out of the guides. This is wide open water—a famed, iconic river—and I arrived ready to give it all I’ve got. Now I’m plopping flies 12 feet away. Might as well be using a cane pole.

Right now, Rice figures these fish want to be spoon-fed. So I shovel them caddisflies like I used to stuff Cheerios in my kids’ cheeks—one at a time, short range, as quickly as I can and as many as it takes to make them happy. In the next 20 feet of grassy bank, I hook five of the Des­chutes’s famous redside rainbows. The fish blow up in my face, crashing the flies close, and with so little line to absorb the fight’s shock, it’s all I can do to get them to hand. That short-range, fast-draw cast is nailing it. It never occurs to me to miss a double-haul, river-crossing distance cast.

Most of what I know about fly casting I learned from my buddy Scott Wood, whose technique is beautiful to watch—except when he is landing popping bugs 1¼ inches closer to the tree stumps than I am. Then it’s just plain annoying. Twenty-five years ago, I remember watching Wood cast from the bow of the canoe with this funky, side-to-side stroke, the fly moving under the rod tip, the butt wedged against his forearm, and then he’d fire off a powerful flippy sort of forward cast, like hurling a Frisbee. It was as unconventional a casting stroke as I’ve seen, but that’s exactly what it took to fly cast from a canoe without sticking a hook in your buddy’s ear.

Another lasting lesson came a few years later. Wood and I were in the surf at the Cape Lookout jetty, wading wet practically to our shoulders, casting Clouser minnows to feeding redfish on an outgoing tide. Wood had 15 feet of distance on me. He caught fish and I didn’t. I pouted for a few hours, then spent the next year working on my double haul, practicing in odd stances such as being submerged to the armpits. Finesse matters​—​but sometimes so does chunking your mess to the horizon.

In three days on the Deschutes, I’ve had to bring to bear just about every casting technique I know. I’ve made steeple casts with my back against cliff walls, reach casts, stagger casts, and enough roll casts that my rotator cuff sent a formal protest to my brain. I’m pretty good at some of these casts; I stink at others. On really long casts, I can suffer from collapsing leader syndrome. I struggle with big mends across stream currents, and blame short arms for the deficiency. But it’s poor timing as much as genetics.

RELATED: Learn How to Fly Cast in 2 Minutes

We’ve caught a ton of fish, which plays a rather significant role in any analy­sis of a fishing trip. But looking back, months later, it’s not the fish I remember with the most satisfaction. It’s a single, particular cast. There was a time in my fishing life when I couldn’t have made it. I could try tomorrow and blow it big-time. But it worked once, so I’ll always know I’ve got it in me.

It happens on the last day, after Dave McCann, another guide on the trip, and I hike up a blackberry-choked rim to look down on a rock-walled cove. The caldera is a mosh pit of conflicting currents, eddies, and seams. Foam whirls in a half dozen gyres, and one big fish is working the inner ring of the vortex. It’s a nightmare for a man with a marginal midair mend, but still, my casting hand twitches. McCann calls for prudence. “You have to figure this one out in advance,” he says. “Watch it. You’re only going to get one shot.”

He’s right. It takes me a few minutes, but I pick up a rhythm in the way the currents boil. Every so often a back current seam flattens out, and the bubbles dissipate a bit, and just then the trout slurps a bug from the thin foam. Wade out deep enough, time the cast correctly, make it long, land the fly just so, and the fly might stay drag-free just long enough.

I pick my way down the steep bank, rehearsing big mends and double-hauls in my mind. In chest-deep water, I channel my inner Scott Wood, standing in the Cape Lookout surf. I watch the swirling waters for a good five minutes, then lock down the timing. The first cast falls too far to the left and there’s no way to mend, so I haul back, hold the rod for the load, and power the second cast forward.

Maybe I finish it with a nifty downcurrent mend. Maybe I just get lucky. I have learned that the casts that work best are the ones that seem to happen of their own accord. But on my next try, glory be, the redside trout comes up, slurps the fly, and does all it can to drag me into the Deschutes.

To be honest: I don’t remember much about the fight with that trout. I have a picture of the fish, deep-bellied and dark red—the second largest I would catch on the entire trip. But what I remember most about three days on the Deschutes River is that one cast. When everything came together.

My second cast, come to think of it.

“One shot.” Pfft. Guides think they know everything.

This story appears in the April 2017 issue with the headline “One Lasting Cast.”