What does it take to score a monster “unicorn” brown trout on the fly in the Ozarks? Patience, persistence, and... 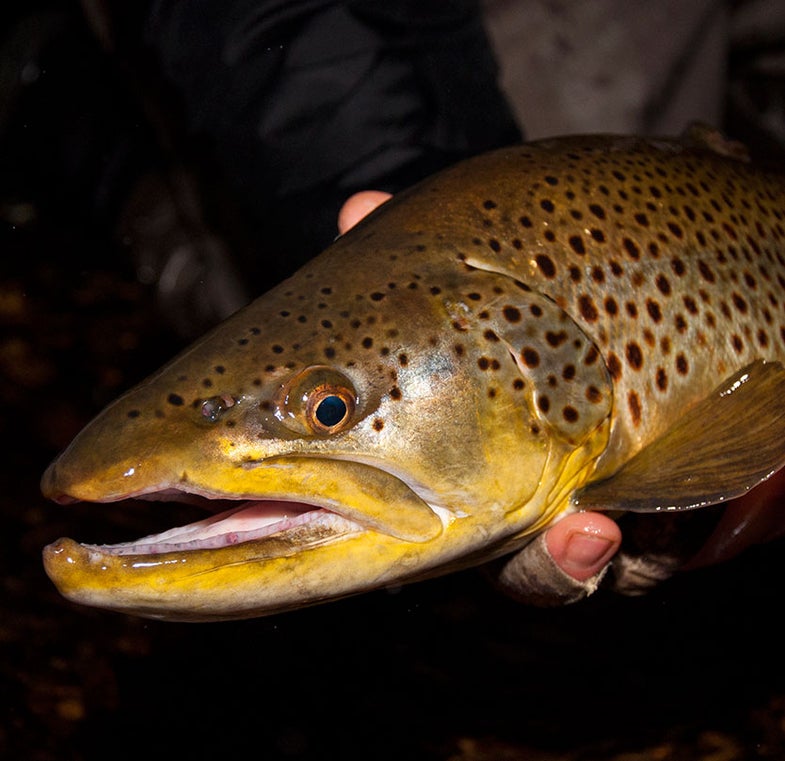 What does it take to score a monster “unicorn” brown trout on the fly in the Ozarks? Patience, persistence, and the willingness to work a big, meaty streamer until your arms fall off. This is not opening-day style stack-em-up trout fishing. This game is about hunting for “the one,” and nobody in the Ozarks is more dedicated to that pursuit than Missouri guide and renowned streamer tier Brian Wise. That’s why when the Hook Shots crew decided to take their love of the big bugs to the White River and North Fork of the White, they called on Wise to show them the local ropes.

The Deal: The White and North Fork of the White are home to some of the biggest brown trout in the United States. The Ozark region spanning the borders of Arkansas and Missouri has even coughed up world-record browns. For the majority of visitors, throwing bait and jigs at the abundant rainbow trout population suffices. But for the die-hard fly guy, nymphs and San Juan worms are not likely to turn a true behemoth. For those after a genuine trophy on the long rod, it’s all about stripping large jointed streamers that swim seductively and really appeal to carnivorous agression of giant browns.

When To Go: Because the White is a tailwater, it maintains fairly consistent temperatures year-round, which means there isn’t a truly bad time to visit. Even in the middle of the winter, the White can produce. The North Fork of the White—or “NorFork”—is a freestoner, which is more difficult to fish in winter. Regardless of time of year, productivity on the White is centered mainly around flow. A bump in water can make or break the action, and it’s not uncommon for this river to experience no releases, essentially turning it into a lake. Guide Brian Wise recommends that to be on the safe side, visit between early March and mid-June. The water is typically good on both rivers, the weather is usually tolerable (except when Hook Shots shows up), and the browns are postspawn and ready to feed.

What To Bring: Forget your favorite 5-weight outfit. If you’re bombing big flies like Double Deceivers, Sex Dungeons, and Prostitots, it will be of no use. To turn these streamers, you want a stout 7- or 8-weight rod, and a reel loaded with sink-tip line. The sink tip allows your fly to stay tight to the bottom, following the arc of the riverbed, during the entire retrieve. That means you stay in the zone longer. Tape or stripping guards will save your fingers from getting chewed up, and a piece of 30-pound fluorocarbon spliced to a piece of 12-pound fluoro works for a leader. No need to use the expensive tapered leaders you’d want for fishing dry flies.

Where To Stay: If you plan to make a play on both the White in Arkansas and the NorFork in Missouri, camp out in the little town of Gainevilles, MO, which puts you less than 40 minutes from both. That’s where we crashed during our shoot, and the Antler Motel was our home away from home. This classic mom-and-pop joint was clean, comfortable, and affordable. The fact that there was a liquor store, bar, and the best restaurant in town connected to it didn’t hurt, either.

Guides
If you want to try your hand at streamer glory—or want some advice on tying these big nasties—check out FlyFishingTheOzarks.com. Here you’ll find mountains of exceptional streamer tying videos from Brian Wise, and you can also get in touch with him if you’re looking for a guided day of chucking your creations on the NorFork.