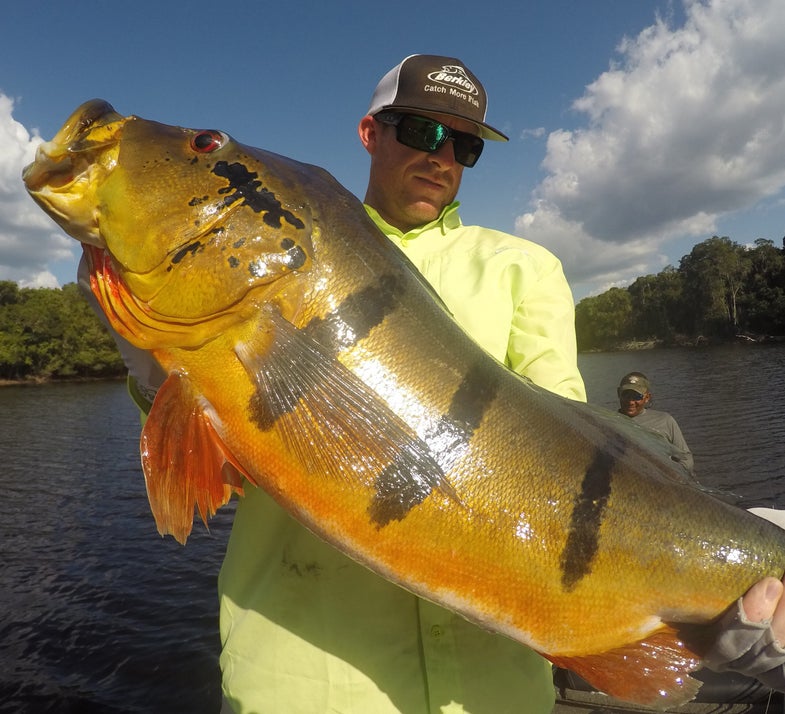 With the long journey to Rio Negro Lodge complete, Hook Shots host Joe Cermele and Pure Fishing’s Kevin Jarnagin have two and half days to spend in the heart of massive peacock bass country. Although the boys have already drawn some epic topwater strikes—and landed bass to 12 pounds—both the guys have their eyes on a 20-pound prize. But as they learn, nothing in fishing comes easy or is guaranteed, even in the middle of the Amazon jungle. Earning those big numbers come from a mix of stamina, persistence, and willingness to try anything. Find out just how far they get the scales to tip, and what kind or trials, errors, and tricks it takes to get them to tip that far.

The Deal: The majority of the world-record peacock bass on the books have come from Brazil’s Rio Negro, which is a massive tributary of the Amazon River. A journey upcurrent to where the biggest peacocks live might start in the metropolitan city of Manaus, but it doesn’t take very long to find yourself in true jungle desolation. In this episode, the crew’s end goal was to reach Rio Negro Lodge by Angler’s Inn International some 400 miles upriver of Manaus. That trek began on a mothership with a two-day steam, fishing along the way. Wetting a line in peacock heaven might not be a short flight—or cheap plane ticket—away, but for those who dream of heavy-hitter peacocks, there is no better location.

When To Go: The best fishing for peacocks in the Rio Negro happens between the months of July and December, with the later months offering the most stable coniditions. There are no winter, spring, summer, or fall seasons in the Amazon, rather simply a wet and a dry season. During the wet season, which typically runs from January to June, the river can get flooded from heavy rains. Without question, low water makes for better peacock fishing, as it keeps the bass contained in the river. During high-water periods, the fish will seek refuge in the flooded jungle, and become almost impossible to catch.

What To Bring: When it comes to a trip to the Amazon, the list of what to bring is vast. Not only is fishing gear important, but it’s worth putting together a pretty hefty bag of non-fishing essentials. If you book a trip with Angler’s Inn (which we highly recommend), their staff will walk you through what will be in your provided “Amazon Tough Bag.” The list includes everything from multiple strengths of sun block, to powered drinks loaded with electrolytes, to medical fricition tape, to multiple flavors of bug dope. You don’t think you’ll need it all, but you will. As for tackle, these fish are no joke. You’ll want conventional outfits you’d feel confident using for muskies, and you’ll want the reels loaded with 50-pound braid. There’s no need for leader with these fish; our guides recommended tying direct the entire time. Loud lures are key if you want surface explosions, with Wood Choppers, large poppers, and heavy-rattling Spooks being staples. However, diving plugs in the 5- to 8-inch range, long hair jigs, a sub-surface walking lures all score as well. If you’re a fly angler, pack a 9-weight outfit. I took two reels, one spooled with floating line and the other an intermediate sink-tip line. Clousers and Deceivers heavy on white, chartreuse, orange, and black were most effective, while standard foam poppers scored plenty of fish on top.

Book A Trip
You don’t just jump a flight to Manaus and go it alone for peacocks in the Amazon. There are many, many logistics involved, which are best left in the capable hands of an outfitter. We promise there is none better than Angler’s Inn International. They made this long trip easy and comfortable. Not too mention, they get you to where the biggest peacocks in the world live. You’ll go in style, you’ll eat well, and you’ll sleep like a baby in cabins and state rooms that almost seem too luxurious given their location in the middle of the jungle. Angler’s Inn International; 1-800-GOTA-FISH