There is little in inshore saltwater fishing more explosive and powerful than a tarpon fight. From the first jump to... 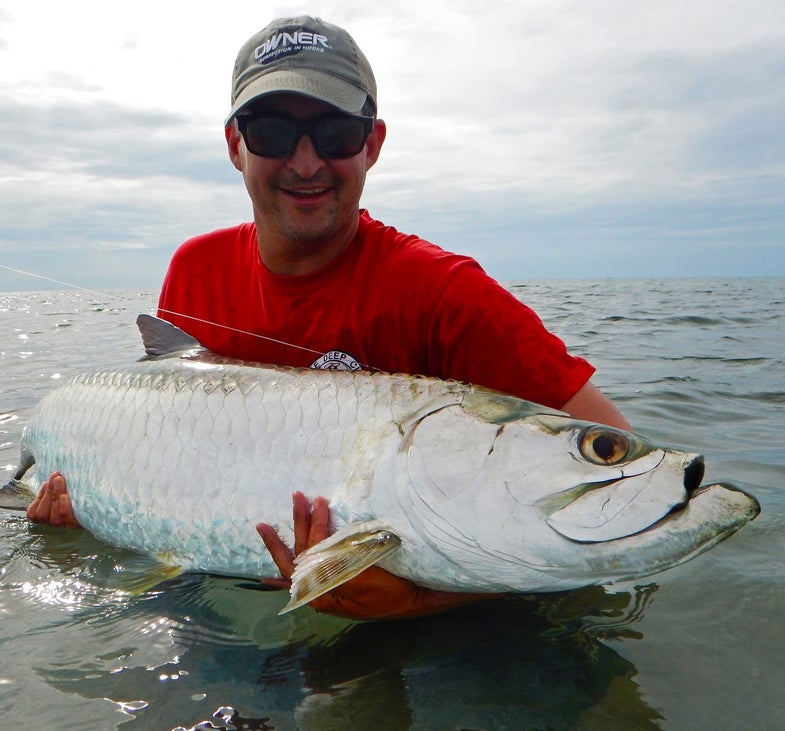 There is little in inshore saltwater fishing more explosive and powerful than a tarpon fight. From the first jump to the final crank, they are exhausting. This June, host Joe Cermele and long-time buddy (and tarpon virgin) Mark Modoski flew to Key West with a mission: catch all the tarpon they could in two days until their arms gave out. On a good day, veteran captain Mike Weinhofer expects 10 to 15 hook ups in a morning. Toss in incessant rain, finicky fish, and the wrath of the U.S. Navy, and the game can quickly get more challenging than expected. None the less, the duo flew home with sore shoulders and clothes slathered in plenty of tarpon slime.

The Deal: The Florida Keys are arguably the most notorious place to fish for tarpon in the U.S., and with good reason. The annual migration of fish floods the flats, channels, and harbors from one end of the Keys chain to the other. While all the Keys experience excellent tarpon fishing, Key West at the bottom of the chain is hailed as the numero uno destination, largely because of the shear number of fish that post up in the strong tidal currents that move around the island.

When To Go: By the book, June is the premier month to chase tarpon in Key West. This is when the fish should be most plentiful. Of course, this is fishing and nothing is ever by the book. Peak time often fluctuates by a month or two, but regardless, a visit between late March and early July will get you plenty of shots at “poons.”

What To Bring: Captain Mike Weinhofer leans of heavy conventional rods and reels spooled with 30- or 40-pound monofilament when bait fishing the harbor. This stout gear not only allows you to fight a tarpon faster (thus aiding in a healthy release), it gives you better control of these big fish in an area that’s typically crowded by boat traffic. Once a tarpon takes, it’s a race to get off anchor and move away for the fleet to thwart tangles with other angles and wrapping of propellers. If flyfishing is your game of choice, don’t go to light with your outfit. Fish in Key West Harbor average 40 to 110 pounds, so a 12-weight rod and reel with a dependable drag and high backing capacity are must haves. Crab flies and dark bunny strips that imitate worms and small baitfish get the nod as top bugs.

How To Fish: The tarpon instictively show up in droves in Key West harbor looking for a easy meal from inbound commercial shrimp boats. Historically, these vessels would stop shy of port to dump their bycatch, so Weinhofer and the rest of the fleet chum with the same sugar shad and sardines shrimp boats dump overboard. The hook baits are the same as the chum, and rigged on a 60-pound fluorocarbon leader with a 4/0 circle hook. Though this hooks are small, they aid in natural presentation, but are still large and sharp enough to penetrate a tarpon’s rock-hard mouth and stay planted. With flyfishing, no chumming is involved. Weinhofer looks for calm seas in the harbor (often in the evening) and hopes to find active pods of fish rolling that can be cast to directly.