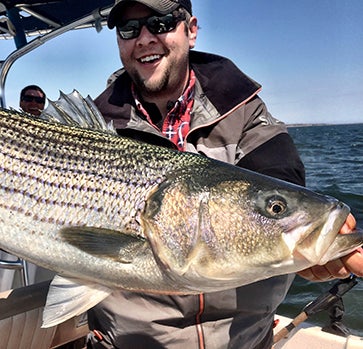 Every spring, anglers from Virginia to Maine await the return of migratory striped bass. And in every state, there is always that one place where it seems the action kicks off. For New Jersey anglers, that spot is Raritan Bay. Tucked behind New York’s Staten Island, and with the Manhattan skyline looming in the distance, this section of the Jersey Coast is a bit more gritty than the vacationlands further south, but the stripers could care less. They have no choice but to pass through Raritan Bay to get up the Raritan and Hudson Rivers to spawn, and while they stage, they feed hard. Raritan Bay can go from 0 to 60 overnight in spring, and host Joe Cermele and co-host Captain Eric Kerber found themselves right in the middle of striper Mecca when that throttled was pinned to the max. What’s the secret to getting in on the bite? Drop everything and go. 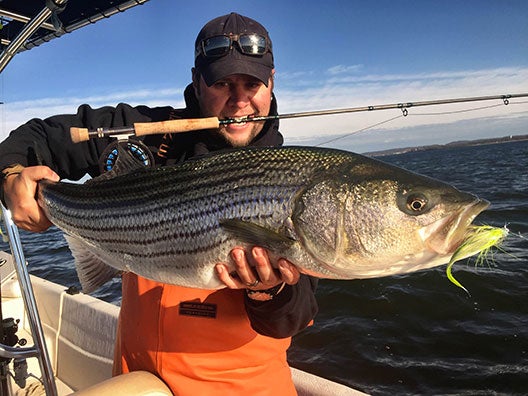 The Deal: Every spring, thousands of breeding stripers slide into Raritan Bay in North Jersey to stage before running the rivers to spawn. Although they show up in waves throughout the spring season, there is typically a massive wave that enters first in very late March or early April, depending on the water temperatures. With water temperatures chilly, Raritan Bay anglers usually lean on slow presentations—such as soaking clams on the bottom or slow-trolling—to pick off these sluggish early-season bass. But sometimes the stars align and the stripers become unseasonably aggressive very fast. That’s what happened during the shooting of this episode. Captain Eric Kerber, “Hook Shots” co-host who charters on Raritan Bay, found the first wave of fish chasing soft-plastic shads four at a time. It was the definition of “drop-and-reel” fishing, and some of the most fierce action he’s ever seen on the bay in early April.

When To Go: If you’re booking a charter on Raritan Bay, the third week of April to the second week of March is prime time…at least by the book. Given that stripers don’t follow a strict schedule and base their movement on water temperatures and availability of bait, it’s possible to see strong numbers as early as the last week of March, and into the first week of June. 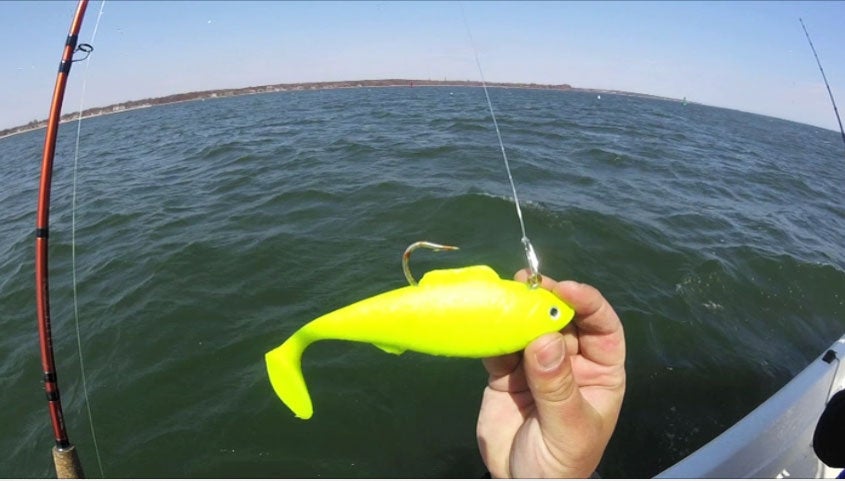 What To Bring: Assuming you’re more interested in casting to stripers than sitting on bait chunks or trolling, you’ll want a healthy supply of 5- to 7-inch soft-plastic shads, with “bunker” and chartreuse being two of the hottest colors year in and year out. Heavier shads tend to be more productive, as you’ll often have to fish them deep in 20 to 30 feet of water with a tidal current cranking. Bucktail jigs and metal jigs can also shine depending on what kind of bait the stripers are chasing, and how aggressive they’re behaving. Medium-heavy to heavy spinning or baitcasting outfits have you covered, as does a reel filled with 30- or 40-pound braid. Add a 25- or 30-pound fluorocarbon leader, and you’re all set. If you want to take a crack at these fish on fly, pack a strong 10-weight outfit, plenty of Deceivers, and make sure your line has a heavy enough sink tip to get the fly down 15 to 20 feet quickly. A 30-foot 300- or 250-grain tip usually does the trick.

Book A Trip
Headed to Raritan Bay? Let “Hook Shots” co-host Captain Eric Kerber show you the way. During April and into early May, Kerber runs two trips daily on Raritan, and has more waypoints logged than you can imagine. If you’re traveling in from a distance, you’ll find plenty of brand-name hotels and motels in the nearby city of Hazlet, NJ, just minutes away from the charter docks in Key Port.