Hook Shots: Florida Snakehead Hunt by FieldandStream Snakeheads are not exactly the most beloved fish in the country. In fact,... 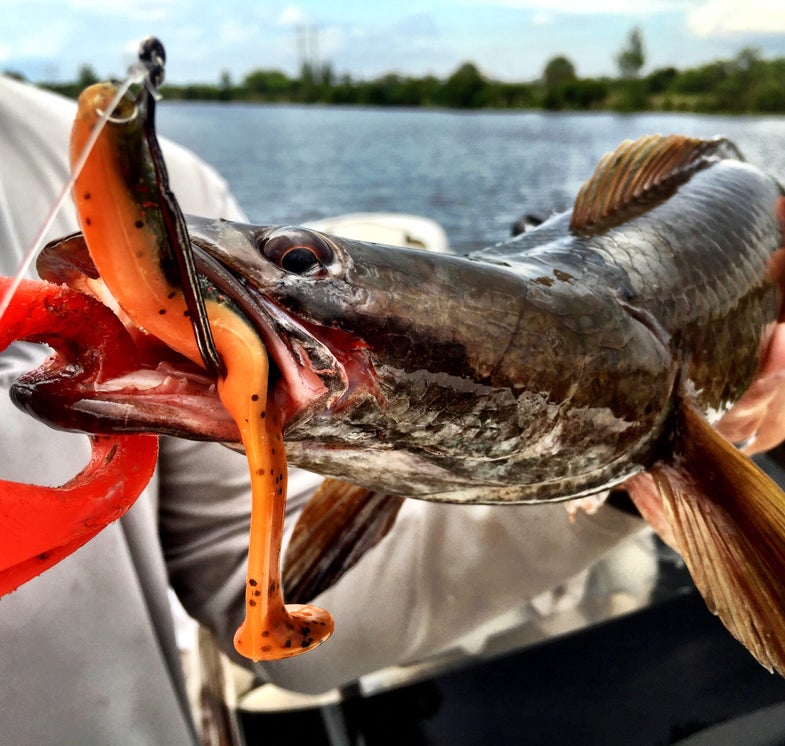 Snakeheads are not exactly the most beloved fish in the country. In fact, they’re downright hated by many. They have been blamed for everything from destroying other gamefish population to decimating habitat. The fact is that snakeheads don’t belong here. The other fact is that their true destructivness is much debated, with more media hype than hard documentation fueling the anti-snakehead fire. But whether you love or hate these fish, one thing is true: When they blow up on a hollow-body frog, it’s a hit you won’t ever forget. They’re smart, powerful, and positively violent on the end of a line, and as host Joe Cermele struck out on his first snakehead quest in Virginia last season, he had a scored to settle. This time in Florida, all bets were off.

The Deal: The canalways around Fort Lauderdale and Miami, Florida, have been snake infested since roughly 2001. Despite efforts to eradicate them, they have pressed on. Nowadays, with the hype surrounding them cooling off, they’ve slowly but surely earned a cult following among anglers that prize them for their aggressive hits and brutal fight. Captain Brett Isackson is part of that cult, having fallen in love with these invaders when they would attack frogs during largemouth trips. Isackson runs about 30 trips a year these days just for snakeheads, and only sees angler interest continue to grow. Perhaps it’s a case of “if you can’t beat ’em, join ’em.”

When To Go: Barring the coldest months of the year (which can still produce so long as a severe cold front doesn’t occur), there really isn’t a bad time to chase Florida snakeheads. However, the hottest months of the year from May through September tend to produce some of the most consistent action, particularly early and late in the day. Regardless of when you show up for a snakehead attack, low light is your friend, so pray for cloudy days. Overcast conditions increase your odds of the fish biting all day.

What To Bring: Proper snakehead tackle is fairly simple, though minorly tweaked from what you might normally use to target largemouths. Whether you’re using spinning gear or a conventional outfit, you’ll want to be spooled with quality braid. Thirty-pound-test would be about the lightest you should go, with 65-pound being about the max you’d need. Not only does the lack of stretch in the braid help you drive hooks into hard snake mouths, it will help you winch them out of the thick weeds and pads they love. To that end, a beefy rod—such as a flippin’ stick—is a wise choice. With their preference for heavy vegetation in mind, hollow-body frogs are a top producers that can play in the nastiest cover, however, soft-plastic buzzing toads rigged weedless also get smoked. If the topwater action is lacking, snakeheads also have no problem smacking a spinnerbait, chatterbait, or Fluke-style soft-plastic bait.

Book A Trip
Without question, there is no better operation for freshwater pursuits in South Florida—from largemouths to snakesheads to peacock bass—than Bass Online. Their massive team of guides are first rate, and there’s somebody on the roster dialed in to whatever you’d like to catch. For snakeheads, of course, we can’t say enough good things about our guide, Captain Brett Isackson. He’s been playing the game for years, and can not only put you on the fish, but teach you the ins and outs of getting these tricky predators pinned and in the net. If you book a trip through Bass Online, their staff can also help you with lodging right near snakehead ground zero outside of Fort Lauderdale.