Philadelphia and Pittsburgh are Pennsylvania’s two biggest cities, and one thing they have in common is that the rivers dissecting... 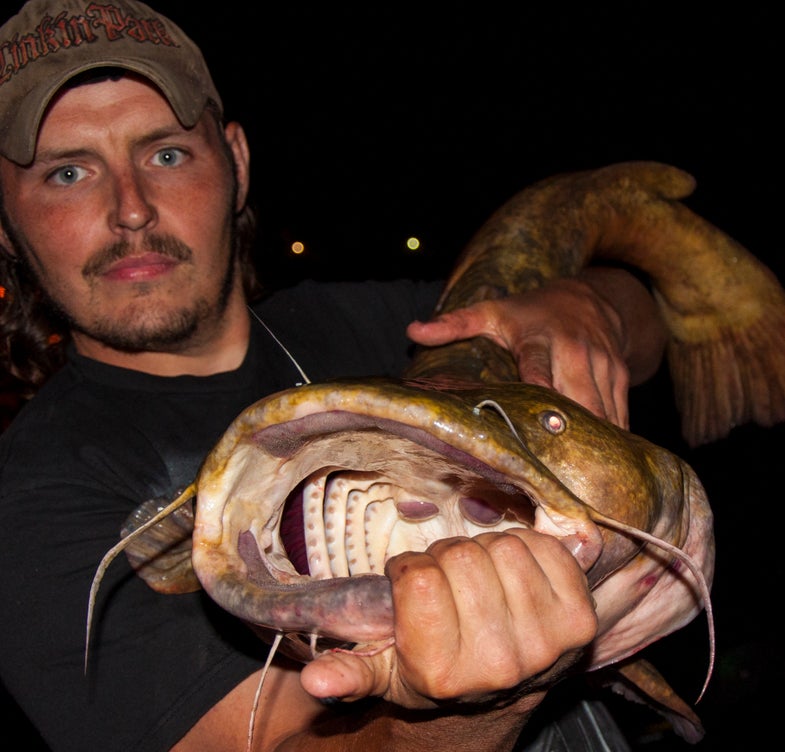 Philadelphia and Pittsburgh are Pennsylvania’s two biggest cities, and one thing they have in common is that the rivers dissecting them are loaded with flathead catfish. While these bottom-dwelling eating machines are native to Pittsburgh, they are technically invasives in Philly, but that doesn’t stop legions of urban catfish hunters from spending long nights on the Schuylkill River trying to hook a trophy. And in Pittsburgh the number of devout flatheaders casting into the Allegheny, Monongahela, and Ohio Rivers is growing annually. So Hook Shots host Joe Cermele teamed up with the best local crews in each city to learn the ropes of catfishing in the concrete jungle, and to find out what sets their methods apart.

The Deal: Philadelphia’s Schuylkill River, by and large, is much more managable for an angler on foot. It’s smaller than Pittsburgh’s three rivers, which makes it easier to read prime water and find access. The crew from Pittsburgh in this episode usually fish the Allegheny, Monongahela, and Ohio Rivers on foot as well, however, for rookies dealing with such large bodies of water, finding sweet spots can take time and patience….good bank spots mus be earned. Catfishermen with boats that have good sonar will make quicker work of scouting for Steel City’s notorious industrial river debris that the flathead love. The Schuylkill—a.k.a. “Skuke”—on the other hand, features a lot more classic flathead structure, such as rocky holes, dead falls, and small eddies.

When To Go: Both the Philly and Pittsburgh crews say flathead action starts to fire up once the water temperatures rise above 60 degrees, making these fish worhty targets from mid-spring through early fall. Because there is so much water in Pittsburgh and it’s often slightly murky, the boys here didn’t seemed too concerned with river conditions. However, on the smaller “Skuke,” the guys pray for high, muddy conditions, as they disorient the baitfish and make it easier for flatheads to hunt. In mid-summer when the water is dead low and clear (like it was during our shoot), flatheads won’t roam as far to feed even after dark, which makes picking the right hole essential. While it’s certainly possible to stick numbers of fish in these conditions, pulling a true trophy gets much harder.

What To Bring: Even though the average fish in both Philadelphia and Pittsburgh’s river can be landed on stout bass tackle, you need to fish with beefed-up outfits for two reasons. One, most flathead will try to retreat to cover when hooked, making it necessary to put serious pressure on early in the fight to get them away from their lairs. Two, all rivers in question can produce fish over 40 pounds, and you’re not likely to beat one on anything less than a stout muskie outfit or heavier saltwater rod. The Philly crew opts for 50-pound braid on their reels with a top-shot of 50-pound monofilment to thwart cut-offs in the structure. The Pittsburgh crew spools with 40-pound monofilament, as the rip-rap in their rivers can be like razor blades. Both teams like circle hooks for flatties as they set themselves when the fish grab a bait and run. Simple sliding fishfinder rigs are the norm. As for baits, both camps say bigger is better. Bluegills, suckers, bullheads, rock bass, and even small carp are flathead candy.

More Info
While none of the anglers in this episode are guides for hire, you can learn more about flatheading in PA’s big cities by checking out Chris McIntee’s Youtube Channel (Philly) and the website of the Three Rivers Catfish Club, which was founded by local sharpie Joe Gordon.