Few places in saltwater fishing are as historic and iconic as Montauk Point at the far east end of Long... 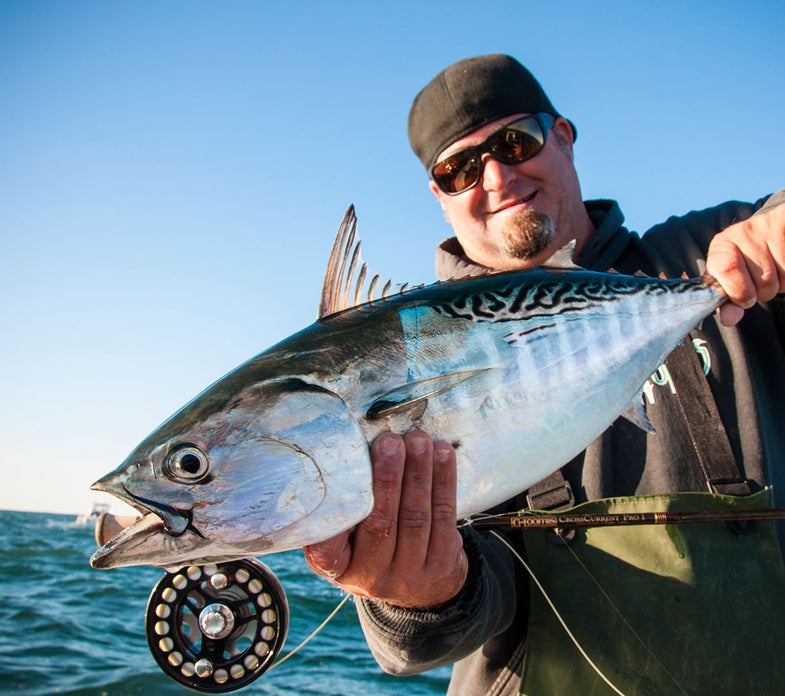 Few places in saltwater fishing are as historic and iconic as Montauk Point at the far east end of Long Island in New York. It’s around this steep headland that tidal flows flushing out of Long Island Sound clash with the Atlantic, pulling thousands of pounds of baitfish into the waiting mouths of striped bass, false albacore, and bluefish that post up in the ripping currents below Montauk Lighthouse. While Montauk is a fisherman’s paradise almost year-round, there is nothing like visiting this Mecca in the fall. This time of year, gamefish are migrating south, and a long stop at Montauk is like a stop at an all-you-can-eat buffet. There is one reason and one reason only to hit Montauk in October; epic surface-frothing blitzes that can be acres across. That’s what host Joe Cermele and Hook Shots regular Eric Kerber were looking for, and it’s exactly what they found.

The Deal: While the every mile of shoreline in the Northeast has the potential to cough up fantastic fishing in the fall, Montauk’s geography makes classic blitz action more consistent. Millions of gallons of saltwater pour out of and into Long Island Sound are the skinny point several times of day, igniting the bite in one spot or another at each turn. In fact, during a good fall run, fishermen can set their watches by certain feeding frenzies based just on tidal stage. Everything from tiny rain baits like anchovies, to bigger peanut bunker, to meaty mullet can be the main course for rovering stripers and false albacore. The dinner menu can literally change daily as water temperatures begin to cool in late September. This time of year, even if one body of fish moves south, you can count on another body of bass or blues moving in from the north within a few days.

When To Go: The inshore and surf-based blitz action tends to kick on in mid-September, typically starting with lots of false albacore and a few stripers. By mid-October, everyone, including bluefish, is at the party in great numbers. By mid-November, stripers are still feeding in Montauk, though by this time, weather and water temperatures dictate whether you get major feeding frenzies or you’re picking at the season’s last stragglers. If you’re planning to visit “The End,” dates from October 10 through 20 are about as prime as they get, provided of course the weather gods smile upon you and those classic Northeast blows don’t keep you off the water.

What To Bring: The beauty of catching the blitz at Montauk is that you don’t ever know what you’re going to hook when you cast into the fracas. With that in mind, overgunning your tackle at little is not a bad idea. Spinning reels should be spooled with 30-pound braid, and 20- or 30-pound fluorocarbon leaders are the norm. This line/leader combo can handle the screaming run of an albacore just as well as the dogging fight of a 30-pound striper. Of course, the key to Montauk success is a reel with a solid drag that can really take a beating. Make sure you trust the guts before you go into battle. Medium-heavy rods in the 7- to 8-foot range are perfect for casting small and large lures, and they aren’t too light to handle hard fighters. Small metal lures, like Deadly Dicks, are invaluable in October, as are small white bucktail jigs. Always have a few larger poppers on hand as well in case you find a busting pod of bigger bass. If you’re into the fly game, 8- to 10-weight outfits are standard, and intermediate sinking lines are what’ll you want most of the time. If you’ve got nothing but Clousers and Deceivers in white, tan, and chartreuse, you’ll get by just fine. And don’t skimp on fly drag here either…just about anything you hook in Montauk has the power to smoke a click-pawl reel.

How To Fish: Cast into the massive pods of fish under the massive schools of birds, and retrieve steadily until rod is bent.

Where To Stay/Guides: There is no shortage of lodging options in Montauk. If you’re looking for something on the swanky side (maybe your wife is coming on the trip with you), the Montauk Yacht Club won’t disappoint. If you like doing it “Hook Shots” style, Snug Harbor Motel is clean, comfy, affordable, and a great place to eat take-out pizza and drink a cold brew after a long day on the water. I stay here every time I go to Montauk. To reach Captain Craig Cantelmo who guided us during this shoot, send him an email at craig@vanstaal.com