The Best Broadheads of 2021 for Compound Bow Hunters

We put the best new compound-bow broadheads—mechanical and fixed—to the test. Here are the results 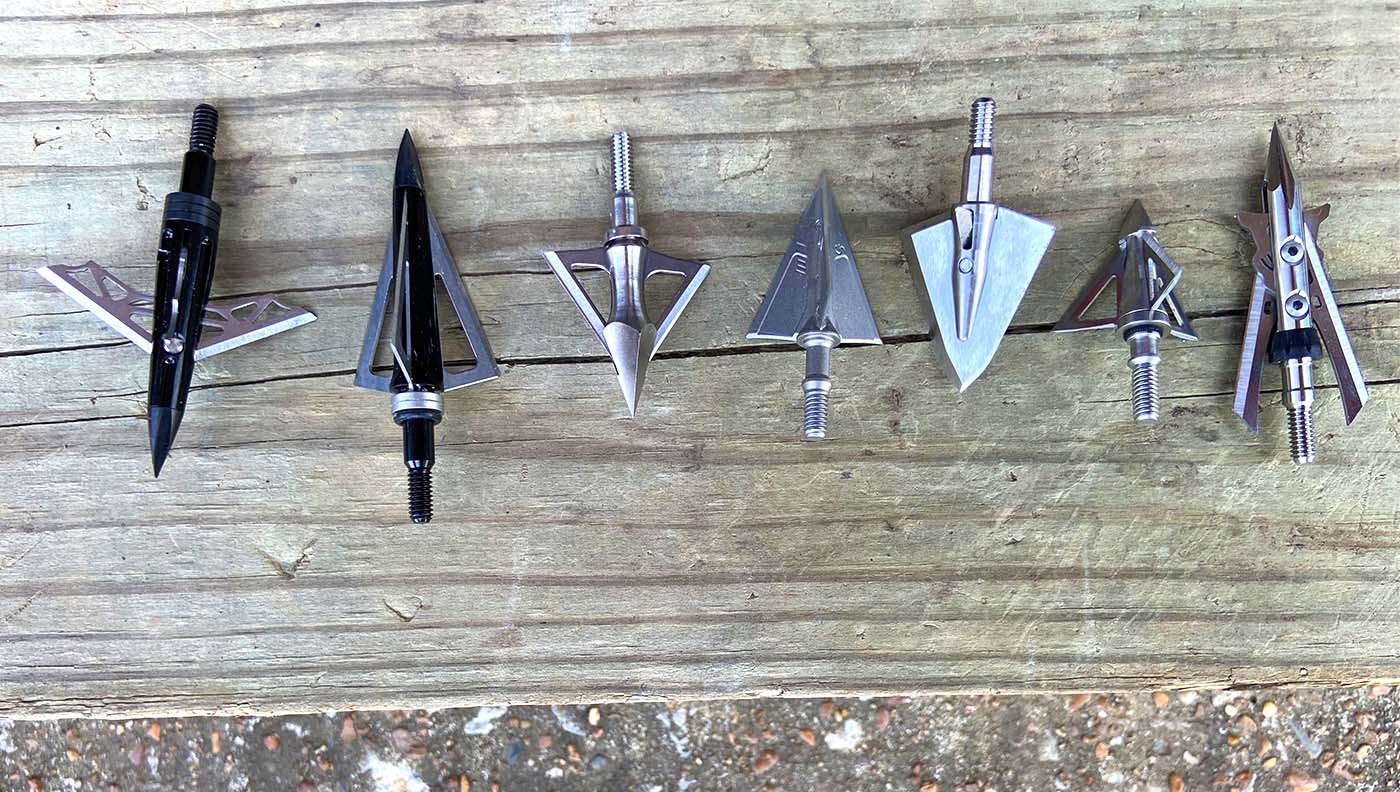 A line-up of the new compound-bow broadheads tested by the author. Will Brantley
SHARE

Last week we revealed the results of the crossbow portion of our annual broadhead test. The difference in some crossbow and compound broadheads is only found in the packaging, but others have true distinctions beyond window dressing. Slower arrow speeds, like you get from a vertical bow, generally mean you can use a larger, more aggressive broadhead and still get true arrow flight, especially inside 40 yards. This year’s Thunderhead 125, for example, is a big fixed-blade that’s advertised as being suitable for crossbows or compounds. I tested it as a compound head (where it did very well), but I also shot it from a high-speed crossbow, just to see. Flight got pretty erratic at 400-plus feet per second.

This year’s compound broadhead test was actually kind of boring, if you’re the type who is entertained by seeing stuff torn up and destroyed. There were no dramatic failures of any sort. I’d take any of the broadheads below deer hunting, and that’s good news for you. Some did fare better than others, though, and some did so at a lower cost, too. Here’s the lowdown.

How We Tested New Compound-Bow Broadheads

Long-time bow-test panel member Danny Hinton and I tested two new mechanical and five new fixed-blade broadheads for compound bow hunters. Once we received a submission, we weighed each head from a package individually to gauge consistency. We did a quick blade-sharpness evaluation by first checking the edges with our thumbs, and then stretching 2-inch rubber bands to 3 inches, between a thumb and index finger, screwing the broadhead into an arrow, touching it against the taught rubber band, and seeing how much effort was required to sever it. Most blades required a little pressure to pop the rubber band, which is acceptable. A couple mostly rolled the band around, and those are too dull. A few popped it almost upon contact, and that’s ideal.

Next, we tested all of the broadheads below for accuracy on the range using compound bows. Hinton used his Mathews V3, set at 60 pounds and 28 inches, and I used my Elite EnKore, set to the same specs, all with 350-spine Carbon Express Maxima Reds cut to 28.5 inches. We adjusted our sights as needed for 100- and 125-grain field points, and then compared their point of impact with a three-shot broadhead group’s point of impact. This was done at 25 yards.

Finally, we moved on to the fun stuff. My buddy Charlie—who processes deer during hunting season and cattle and pork in the off-season at Hart Farms, donated a dozen sides of cattle ribs to the cause. I suspended those rib cages from a rope in front of a Block target. Then I shot them from 20 yards using my compound setup. During this portion of the test, I evaluated the broadheads for penetration and durability. For mechanical models, I noted both entry and exit holes on the cattle ribs, to see if the blades opened on impact and whether they were still open and intact when they hit the Block target behind the ribs. That’s noted in the “Reliability” column in the chart immediately below.

Read Next: How to Choose the Best Beginner Compound Bow

The 7 Best Broadheads of 2021 for Compound Bow Hunters 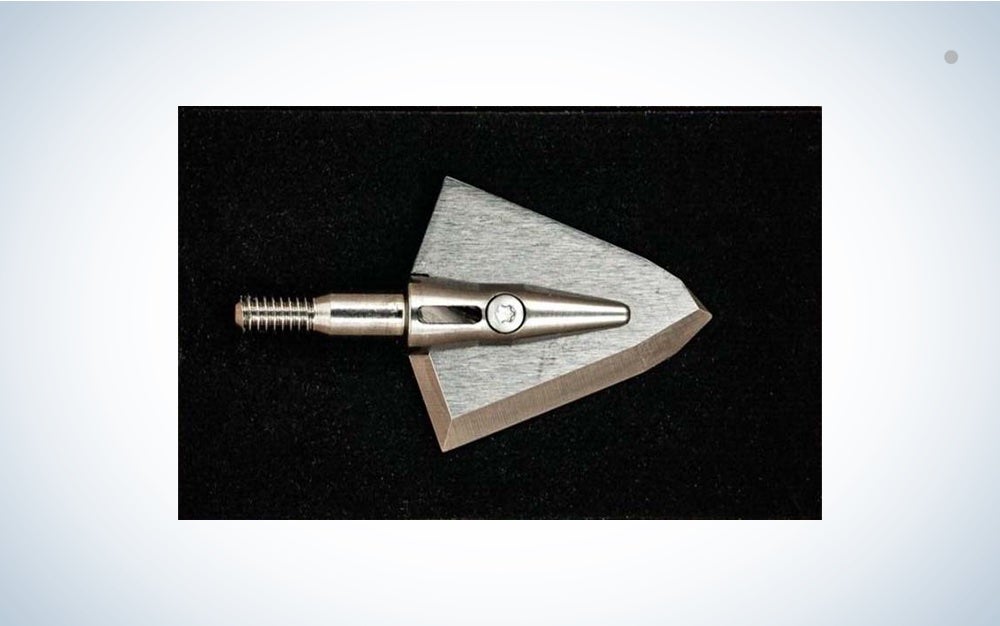 The Iron Will SB125 performed almost flawlessly. They aren’t cheap at $100 for 3, but they come with a warranty.

These broadheads are built like fine knives from A2 tool steel, and they come with a lifetime warranty. They were arguably the sharpest broadheads of the test (along with their crossbow counterpart), popping the rubber band almost on contact. They were consistent, too, with each weighing 125 grains, almost to the grain. The tanto-point, single-bevel broadheads are designed to maintain the arrow’s rotational spin upon impact and bore larger holes through critters; I didn’t have the high-speed camera equipment needed to verify that, but the holes through the cattle ribs seemed to almost perfectly mirror the broadhead’s shape and size, defined in part by a 1 -1/16 cutting diameter and a ¾-inch bleeder blade. The SB125s buried deeper into the Block target than anything else, which I expected. One of the broadhead tips did roll after passing through the ribs, which was disappointing given the price of these heads, but it could’ve been fixed with a file. They hit right alongside my 125-grain field points, but were a couple inches off for Hinton. Iron Will recommends a right offset or helical fletch for optimal flight, which we did not have on our test arrows. 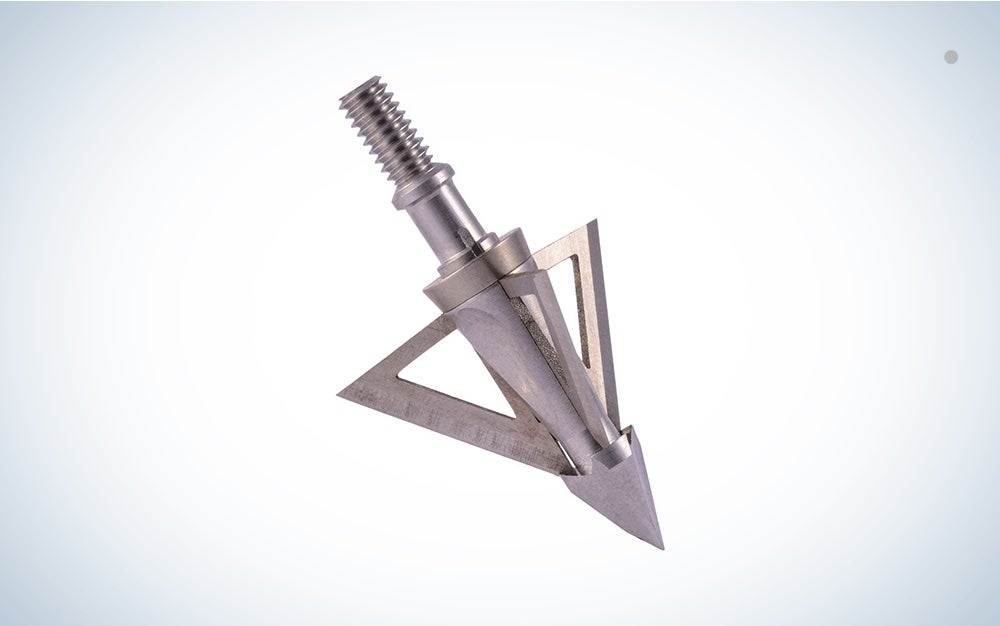 The Wasp Mortem performed great in our test and is nicely priced at $33 for 3.

Last year’s Wasp Havalon HV 125 was the best fixed-blade broadhead of the test, and one of my personal favorite broadheads of all time. (It’s still my go-to hunting head). This year’s Mortem is a more compact fixed-blade constructed of 100-percent stainless steel. Each head weighed 100 grains out of the package, and we shot great groups with them, right alongside our field points. They passed the cattle rib test with flying colors; all punched through and buried deep into the target, and the blades seemed virtually unscathed. The Mortem has a smaller cutting diameter than the Havalon HV (1-1/8 compared to 1-3/16), and the blades were noticeably duller—though still one of the sharper heads in this year’s test. They’re a pretty solid bargain, and available only at archery pro shops. 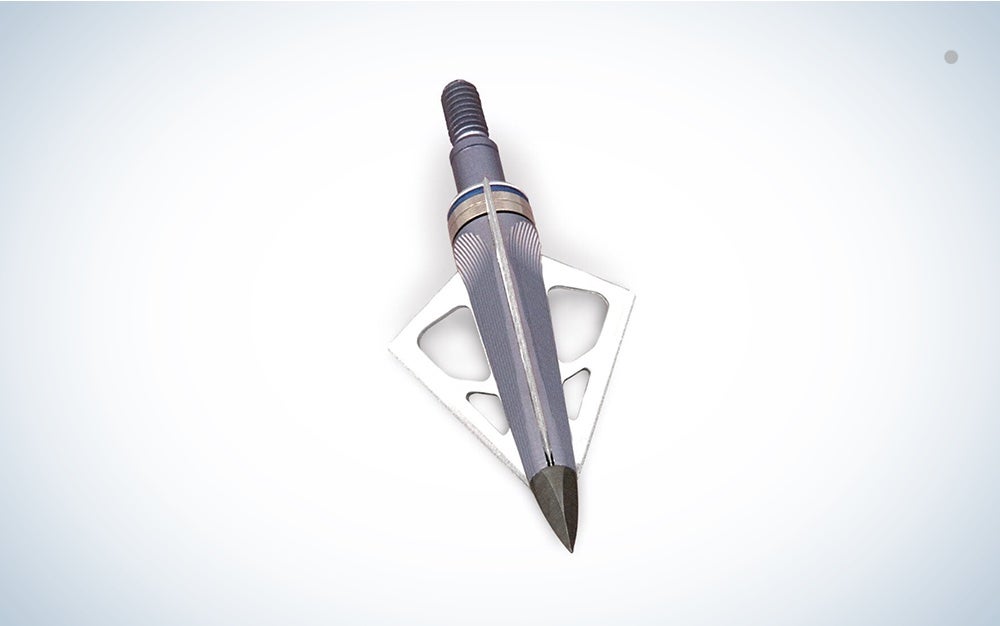 Given its performance, the NAP Thunderhead is great deal at $40 for 5 heads.

I killed my first bow deer with a Thunderhead 100, and the newest iteration of this classic isn’t much different than the original. Piecing together the new Thunderhead 125s is a touch tedious (always has been), but they fly well and were among the few broadheads of the test to pop the rubber band almost upon contact. These blades are scary sharp. Hinton shot some of his tightest broadhead groups of the test with these, too. They were among the most consistent broadheads of the test, averaging 125.2 grains out of the package. This is a big fixed-blade with a 1-3/16-inch cutting diameter, and it knocked big holes in the cattle ribs—but the tradeoff is that they suffered more blade damage than any other fixed model we tested. Still, the blades are easy to replace, and these are easily the test’s best value, since you get five in a package. 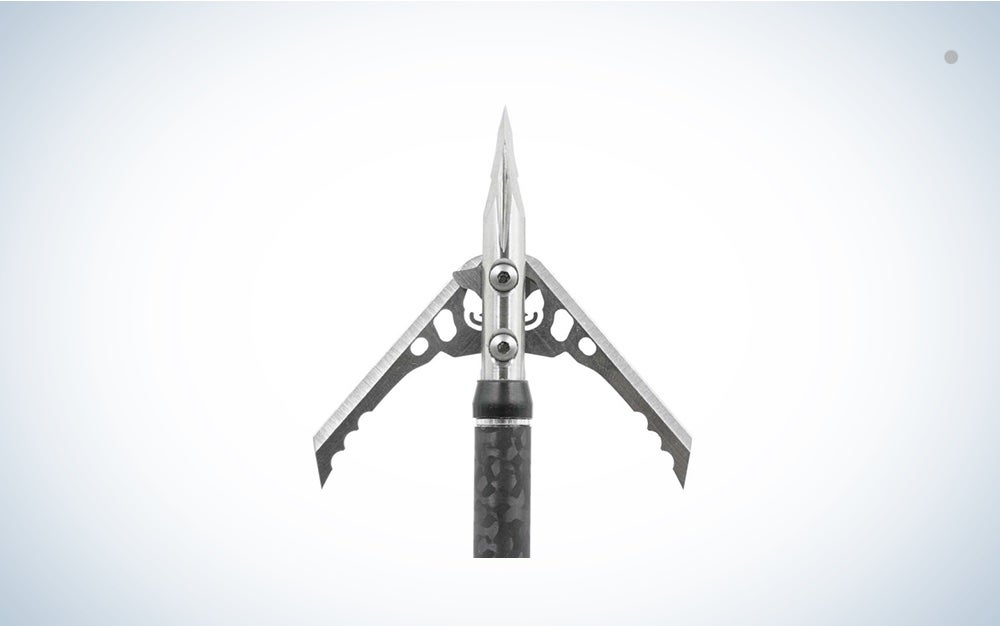 The Rage Hypodermic Trypan NC was the best mechanical head tested; it goes for $40 per two heads.

Last year’s Rage submission struggled in the cattle-rib test. But this year’s Hypodermic Trypan NC has a redesigned No Collar system that both retains the blades in place in flight and buffers them on impact. It worked beautifully at both minimizing blade breakage and increasing penetration through the cattle ribs. Every single one punched right through the cattle ribs and into the Block target, leaving the signature 2-inch-wide holes on both the entry and exit sides. The blades were nicked with some bending, and the blade containment systems were thrashed, but that’s to be expected with a wide-cutting mechanical. The titanium ferrules were unscathed. Furthermore, these broadheads were consistent, with less than a half grain of weight separating them out of the box, and they hit within an inch of our 100-grain field points. They were acceptably sharp; it took some pressure and a little back and forth to pop the rubber band. Really, my only criticism is that a package of two is a little stingy, since you’re going to have to replace blades and components after killing a critter with them. 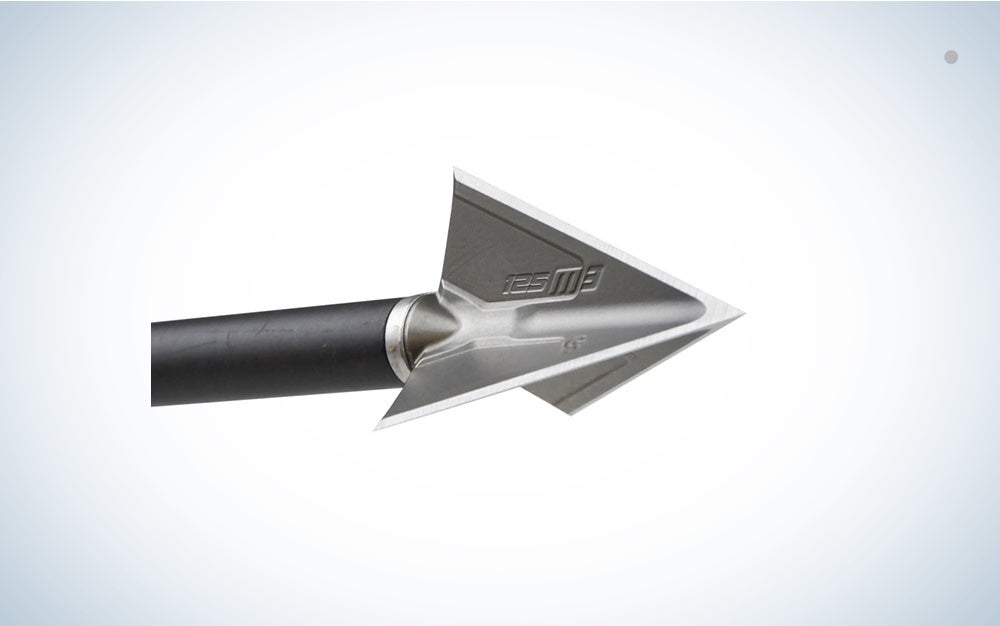 The Montec M3 125 is the latest model in a line of proven fixed-blade heads. They cost $47 for three.

The Montec M3, which we also tested last year, held its own again this year. The one-piece, cut-on-contact broadhead was extremely sharp; I can only nod to the Thunderhead and Iron Will for being any scarier. It zipped through the cattle ribs and deep into the Block target without issue, and was largely unscathed afterward. As was the case last year, we had some minor flight issues with the non-vented M3 Montecs (older Montecs were vented, but duller) that would’ve required sight adjustment prior to hunting. There was also more than a grain’s worth of difference between the heaviest (102.4 grains) and lightest (101.3 grains) heads from the same package. Still, none of that would stop me from using them. Montecs aren’t all that exciting, and they don’t cut giant holes. But they do penetrate like few other broadheads, and they are easy to reuse and resharpen. I’ve killed a pile of game with them, and they remain one of my all-time favorite broadheads. 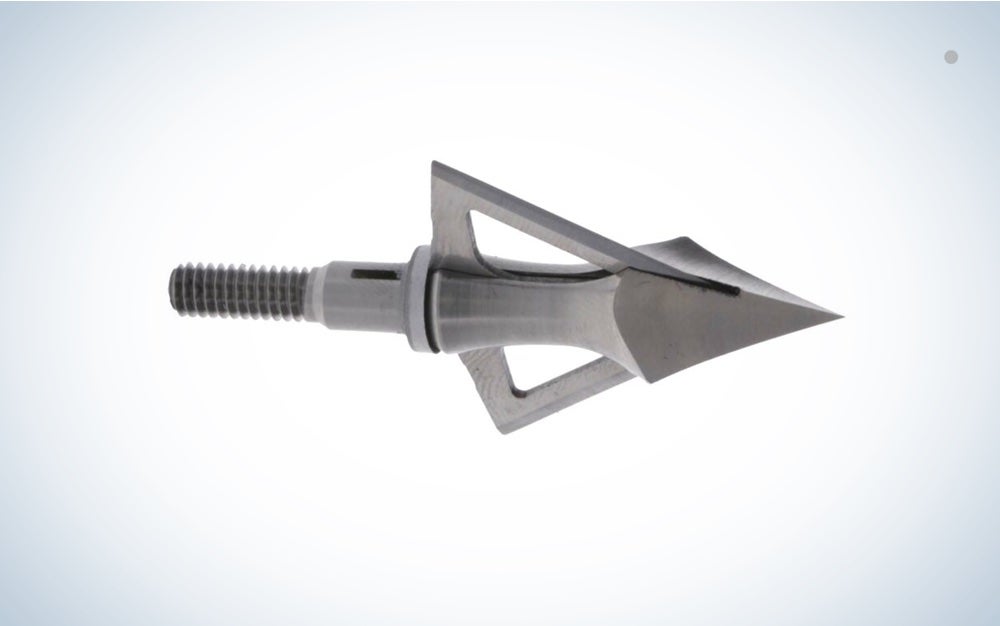 The Titanium Large Game is an interesting design that’s technically a two-blade, but with a chisel-style, grade-5 titanium point that took up about a third of the ferrule. The point is moderately sharp and offers a 1/2-inch cutting diameter by itself. We expected crazier flight, but these broadheads shot solid groups that were about 2 inches off, on average, from our 100-grain field points. They punched right through the ribs—no surprise there—and buried deep into the Block target. One of the points rolled a bit, but could’ve been fixed with a file, and there was some slight blade damage. Overall, performance against bone—what this broadhead is designed for—was impressive. They were sharp enough out of the package, and each pack of three comes with a set of replacement blades, an overlooked added value in my opinion. They ran about 2 grains light on average, with a full grain separating the lightest from heaviest in each pack. 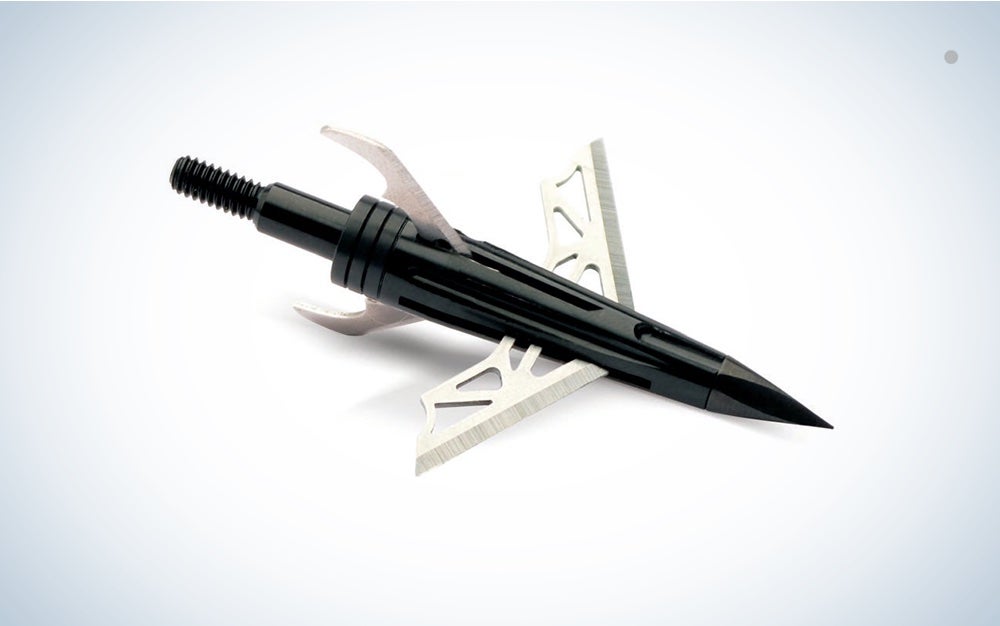 The 100-grain version of this broadhead didn’t fare well in my 2020 test, but the 125-grainer did much better at compound-bow speeds. The DK4 (DK stands for Dark Knight) is a hybrid design with a pair of pivoting, 1¾-inch fixed blades and two smaller swing-open mechanical blades, all housed in an aluminum ferrule. The blades were acceptably sharp. The broadheads ran heavy out of the box—128.9 grains on average—and a full grain separated the lightest from the heaviest in a single package. Still, they flew pretty well at 25 yards, and hit right alongside our 125-grain field points. Hinton shot his best broadhead groups of the test with these. Through the cattle ribs, the DK4 punched big holes, with a large overall cutting surface, and stuck into the Block target behind the ribs. Blades were mangled, but the ferrules were all in good shape. I’d give this broadhead a nod for turkeys, especially, and anyone who likes a big cutting diameter and overall cutting surface on whitetails.

Read Next: Best Compound Bow Accessories to Trick Out Your Hunting Rig