The Basecamp gives the strength and backbone of a fixed-blade knife, but is small enough for EDC 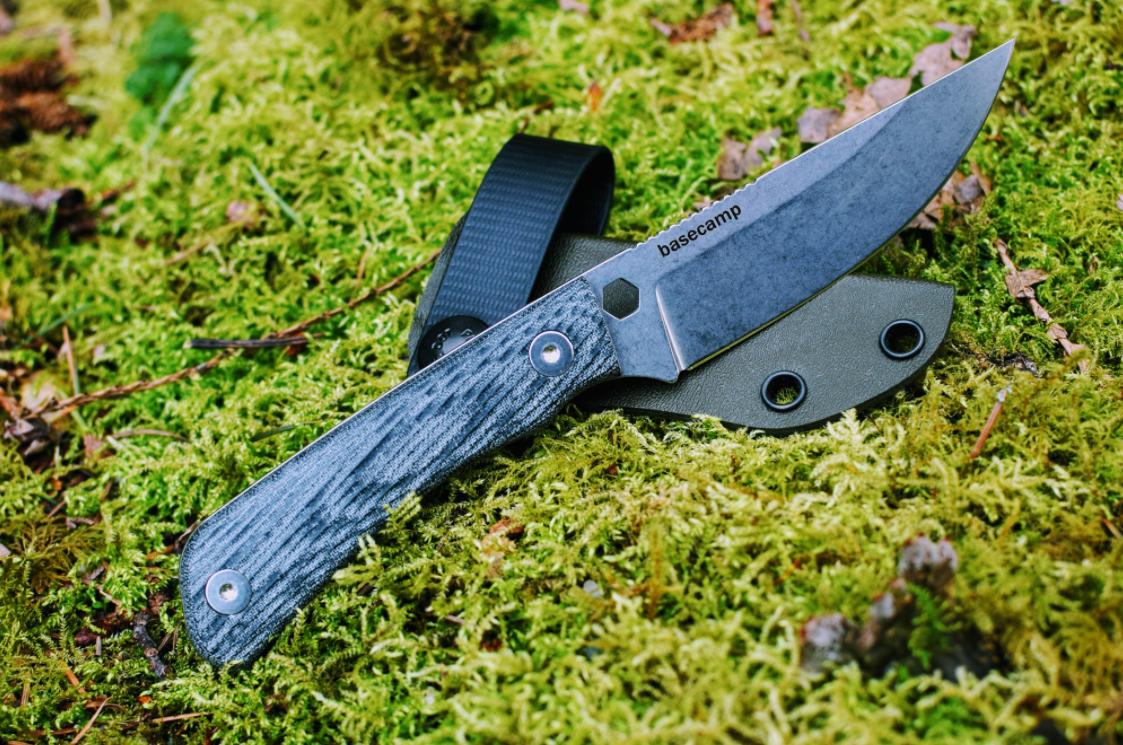 A knife is an essential tool. We use it to process game, cut cordage, prep food at camp, and so much more. Even when we’re not out in the sticks, there are everyday-carry blade chores around the home and office, from slicing up cardboard boxes to helping with getting dinner on the table. Personally, I prefer a full-tanged fixed blade to a folder, all other things being equal. They are stronger, being all one piece, and they can be quicker to deploy if you’re in a hurry. Plus, no moving parts that might fail at the worst possible moment.

Read Next: The Best Bushcraft Knife for Any Budget

The guys at Rainier Knives have a wide range of experience, from engineering and manufacturing to serving in the Marine Corps. They poured all of that knowledge into knife making and earlier this year debuted the Basecamp. This is their second knife model, after the Fastpak. I am a big fan of the Fastpak. It is an ideal knife for day hikes and house chores. So, when I heard they were coming out with the Basecamp, I was in line early to get one.

Specs on the Rainier Basecamp Knife

I have gorilla mitts for hands and, as a result, I have a hard time finding fixed-blade knives that are small enough for EDC but still have a handle that’s long enough for a full four-finger grip. I like having a knife that I can slip into a pocket when I don’t want to advertise it on my belt. The Basecamp knife fits the bill perfectly.

The the full-tang knife stretches 7.4 inches from end to end, with the blade running 3.4 inches. Elmax steel is a stainless steel, with 18 percent chromium content. The minimum is 12 percent to qualify for the stainless label. However, it also has 1.7 percent carbon in the mix, which helps the steel to behave more like a carbon steel than stainless. It has great edge retention and is still relatively easy to sharpen. Overall, it is an extremely tough steel, capable of withstanding quite a bit of abuse.

Read Next: The 25 Best Knives Ever

I chose black linen Micarta for the handle scales. Other options are OD green or natural linen, which is a light brown color. While linen Micarta has a natural texturing to it, they’ve added some additional ridges to the scales. The handle has a slight palm swell. There is also some contouring to the shape of the handle. All of which combines for a very comfortable grip, even after long-term use. And yes, there is just enough real estate for a full four-finger grip.

At the butt end, there is a lanyard hole that’s almost hidden. In fact, it wasn’t until I was checking the knife’s specs online that I learned about it; that’s how hidden it is. So while it is rather small, you could thread something thin through there. The straight back blade has a high saber grind. The edge has a lot of belly, making it great for slicing. There is some jimping along the spine that provides additional control for when you’re doing fine carving tasks. Out of the box, the blade edge is hair-popping sharp.

The Basecamp comes with a Kydex sheath. There is a single strap with a Pull-the-Dot snap. However, there are a few other attachment points, so you could set it up as a neck knife with a lanyard or strap it to a pack or another location. The strap is easily removed for those sorts of carry options. There are four colors of Kydex available: black, blaze orange, OD green, or coyote brown.

Without the sheath, the Basecamp weighs just 2.68 ounces. The sheath adds .88 ounce to the ensemble.

How the Rainier Basecamp Performed in Our Test

I’ve been carrying the Basecamp off and on for the last few months. It has gone with me on several hikes and I’ve also been using it around the house. Most often, I take the strap off the sheath and just pocket the knife. It fits just fine in my front pants pocket. The sheath has great retention, without going so far as to be problematic when removing or replacing the knife. It snaps in with authority, but you don’t need to apply a ton of force to draw the knife out.

I love how lightweight, and easy to carry, the knife is. Let’s face it, many common tasks that require a sharp knife are often made cumbersome with a large blade. Sure, you can cut down shipping boxes with a foot-long survival knife, and it might even be fun to do so, but your co-workers might have questions.

The size of the knife is perfect for just about any common knife chore, I’ve found. Mine has opened and flattened countless boxes and cut numerous lengths of cordage. It has seen the most use in the kitchen. As the family cook, I’m always slicing fruit and vegetables, cutting up meat, and engaging in all manner of other types of food prep.

The Basecamp has performed flawlessly with every task. It has proven comfortable during extended use, with no hot spots nor finger cramping. There is enough handle for even larger hands to get a full grip, but it is slim enough that even those with smaller hands won’t find it awkward or clumsy.

The Rainier Basecamp retails for $179, and comes with a lifetime warranty that covers any manufacturing defect. The company will also sharpen your knife at no charge. All you do is pay shipping.

I’d recommend the Basecamp to anyone seeking a pocket-size fixed blade that is perfectly suited for home or field work. With just a bit of routine maintenance and care, this knife will easily be passed down to the next generation.