Get on the Sticks for Hunting Africa

Going on safari? Practice shooting from your feet, with a tripod 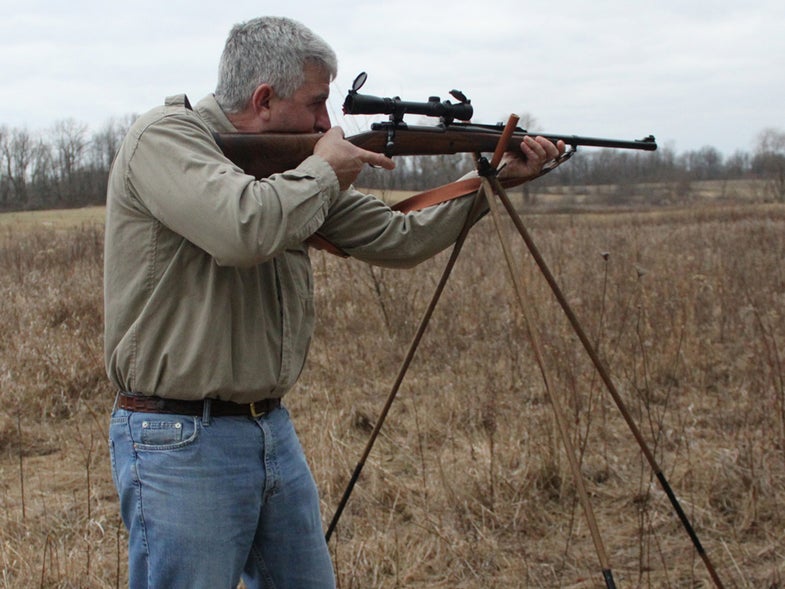 On my very first safari, I asked my PH, Ian Manning, to rank the shooting ability of his clients by nationality. Tops on the list were Americans and Germans.

“The very best,” said Ian, “are the Americans. There’s nothing as good as a really first-rate American rifleman. And by the way, your rifle looks like it was built for a French nobleman.”

This last is the worst insult I’ve ever taken and walked away from.

Two decades later, I asked the same thing of a PH named Clive Perkins. He didn’t think highly of any nationality.

I caught a rocket, as the British say.

“Bloody awful. Afraid of their guns, scopes too big, wrong bullets, can’t shoot offhand, and won’t shoot unless it’s off a benchrest.”

Which brings us to shooting sticks.

When I made my first safari, shortly after the introduction of smokeless powder, shooting sticks did not exist. All African shooting was offhand. In eleven safaris, I can remember three shots that were not taken while standing on my hind feet. It is still that way, but now, your tracker will have a homemade tripod with him at all times, and it will be set up without fail when the time comes to pull the trigger.

I think shooting sticks make eminent good sense. Most hunters are lousy offhand shots, and this, coupled with the adrenaline rush that comes with African hunting, makes their shooting truly atrocious. Second is the economic factor. The rule in Africa is that if you draw blood, you pay for the animal, and in most cases, this can mean a sizeable chunk of change. In 1981 when I shot my roan and sable in Zambia, the license fee was $750 for each animal. Now it’s $8,000 and $8,500 respectively. Years ago, at a camp next to a major river, I was asked to thin out the crocodiles because the villagers who lived nearby couldn’t get water. So I did it as a public service. Today, the trophy fee per croc is $2,150.

In the past, I was anti-shooting stick because I imagined it would cost you a few seconds to get set up, and in Africa, where much rifle work takes place in great haste, this can be a problem. But a sharp tracker is going to be right there at your elbow, and unless you’re hopelessly inept, you’ll be ready to shoot in no time at all.

And then there’s the humanitarian aspect. A great many African animals bear the hallmarks of bad shooting. My best kudu had a healed bullet hole through one ear. My sable had a perfectly mushroomed .375 Silvertip slug in its guts that someone had put there a long time before. I once killed a buffalo that another hunter had wounded the previous day and not tracked down and finished. Whoever pulled the trigger was the third person to shoot him. We dug out that slug, and two others, including a lump of hammered iron that a poacher had fired from an old muzzleloader. Why me? this poor animal must have been thinking for a good deal of his life.

The PH and the trackers will perform prodigies to hunt down something you’ve shot badly, but even they have their limits. Better to do it right in the first place, and shooting sticks are a major help.

Two other thoughts on the subject: Before you leave home, it’s a good idea to practice shooting over a tripod.

Monopods and bipods differ only in their degrees of worthlessness for this application. Get something with three legs.

And, if you do wound something dangerous and the PH says, “Well, bwana, let’s go sort him out,” you’ve just received the greatest compliment of your life.