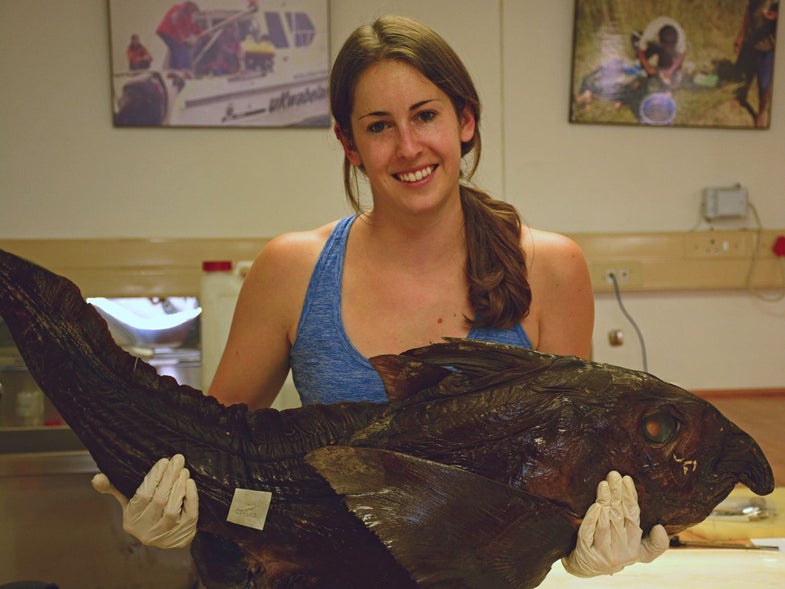 What has buck teeth and winged fins, and wouldn’t be out of place in a child’s nightmare? A ghost shark species discovered in early 2017, it turns out. Researchers announced the discovery of Hydrolagus erithacus, the newest known ghost shark, or chimera, in the journal Zootaxa. But even for a ghost shark, the creature is eerie-looking. The newly discovered species is nearly 3 feet long, and has rabbit-like teeth and a bulky head that tapers to a thin tail. It lives in deep waters between South Africa and Antarctica.

LiveScience reports that deep-sea fishermen brought two of the rare chimeras on board as bycatch. It was clear that the fish were different from other ghost shark species. “The scientists and the fishermen in South Africa knew this was not the same species, because Hydrolagus africanus is small; it’s brown,” Kristin Walovich, a Pacific Shark Research Center graduate student and the lead researcher, told LiveScience. “This one was huge and really dark in color. Just visibly, they were definitely different species.”

Though named after sharks, ghost sharks aren’t sharks at all. One difference, among many: ghost sharks swim with pectoral fins; true sharks use their tail. Scientists know relatively little about ghost sharks, however. One of the newly discovered specimens had a crab claw in its gut, so it’s possible that those buck teeth are used for cracking open shells. This is not the first ghost shark to emerge in recent years. In 2016 F&S reported on a ghost shark with green marble eyes and wings.