Go Hunting With a Vet

I believe I’ll take up knitting. You are looking at the biggest nontypical buck ever taken in Oklahoma by a... 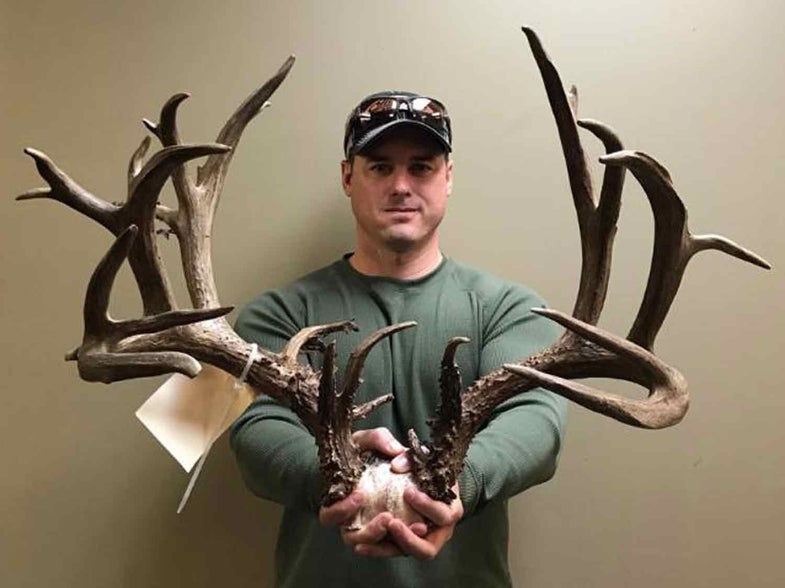 I believe I’ll take up knitting.

You are looking at the biggest nontypical buck ever taken in Oklahoma by a bowhunter. Travis Ocker shot this 245-2/8 inch buck at Fort Sill on November 12. The 27-pointer is second only to an Oklahoma rifle kill that went 248.

Ocker, an active-duty Army sergeant who served in Afghanistan in 2011 and 2012, was an artilleryman who has some PTSD issues and now works in the base’s gym.

“I was hunting a stand I’d probably hunted five times over a two-week period when the wind was right,” he says. “I’d seen and missed a 10-pointer at 25 yards the day before. I’d had to contort my body, and it just wasn’t a good shot. Thankfully, it was a clean miss.”

He arrived late the next day, after first light, and was barely set up when the 10-pointer started his way again. But he failed to notice a doe with the buck. She stomped, snorted, and both headed back across the creek and up into a thick bedding area.

“I was disgusted with myself and just stood there with my bow for five minutes,” Ocker says. “Then I see this huge deer going down the creekbottom and up into the same bedding area. Thirty-five minutes later, the big buck—and I knew he was over 200 but that’s all—comes out with his nose to the ground and straight towards me.” Ocker struggled to keep his composure, stopped the deer on the trail with a soft bleat at 30 yards, and shot. It looked like a good hit, maybe a little far back. “But there was a good blood trail. I texted everybody I knew to come help, including my 15-year-old, Chadwick Saylor, who was hunting 200 yards away.” He’d seen the deer stop for a moment with blood coming out its wound, then head up into the bedding area.

Ocker backed out and waited an hour before starting on the blood trail. “It was good at first, but then almost stopped. My son was like a bloodhound, somehow picking up a drop every 15 yards or so.” They trailed the buck for four hours before Chadwick spotted it bedded down, woozy, its head bobbing, but still alive. Travis put two arrows into the deer to finish it off, then realized that the buck was much bigger than he’d thought.

What’s Ocker doing now? Putting the word out to other vets every way he can think of. He says he is already hearing from vets who normally don’t leave their houses and is trying to get them interested in bowhunting. He already has one guy who comes by the house almost daily to practice.

“Each individual can find a way to engage with somebody. I want nonmilitary people to engage. Do more than slap a bumper sticker on your car or sign a Facebook petition. Reach out to the guy next door who has weird tendencies. We’re not broken. We don’t want pity. Just reach out. And it doesn’t have to be about hunting. It’s the gesture that counts.

“I’m scheduled to exhibit my buck at the Backwoods Hunting Expo in March in Oklahoma City. I don’t go out in public a lot. I’ll tell you what: I’m scared to death. But if it gets one vet out or gets one person to reach out to a vet, I have to do that.”