Go to Your Eternal Reward in Camo 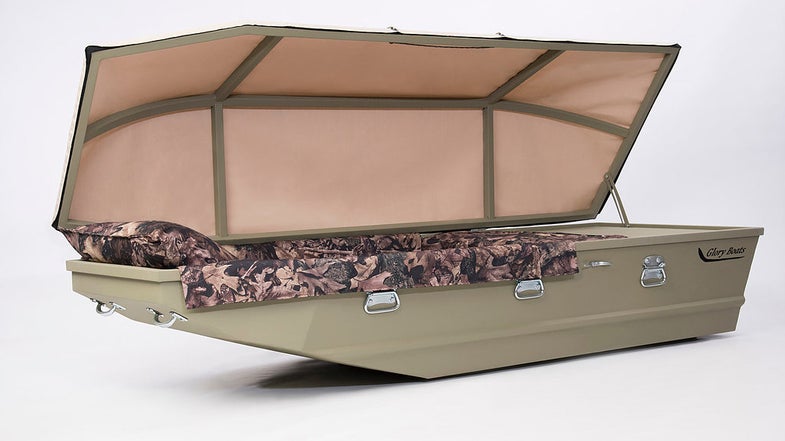 A well-known fishing joke starts with a long funeral procession headed by a truck towing a boat with a coffin aboard as it pulls into a cemetery. The sight prompts an onlooker to say, “That guy sure must have loved fishing.” A passing mourner says, “Still does. Matter of fact, he’s headed off to the lake as soon as we plant the wife.”

When your turn comes, Glory Boats is there to make things a little easier on your loved ones. The Little Rock, Ark., company makes funeral-ready caskets that look like jon boats and are compatible with standard burial vaults. They aren’t actual boats of course, so you won’t be depriving your heirs of a seaworthy fishing vessel. But they look like real johnboats, although a bit shorter, stubbier, and with the extra handles for pallbearers. They come with your choice of Woodland, Marsh Grass, or Pink Camo linings and go for $2,800, which isn’t bad for a casket these days.

Owner Joel Schmidt says he got the idea when his 74-year-old father, a self-employed electrician, took a bad fall from a ladder, broke most of his ribs, and ended up in a hospital bed. As he talked to his dad, Joel was struck in a way he hadn’t been before by the fact that they had never discussed funeral arrangements. And that maybe it would be easier for his father to say what he wanted before his death than after. At one point, Schmidt said, “If you hadn’t told me what you wanted, I might have just buried you in your fishing boat.”

The thought stuck and he eventually founded Glory Boats. He says the company’s mission is a lighthearted way to encourage people to plan for their funerals and relieve their survivors of doing guesswork at a stressful time. It’s not a bad idea.

My own mom, 90, has just entered hospice care. She can no longer speak, and her fingers are too weak to write down letters, so it’s hard to communicate. She and my sister made funeral arrangements a while back, for which I’m immensely grateful. It’s been much harder on Olivia than me. I went over to see mom last weekend and took my guitar. For some reason, I wanted to make sure I sang to her before she leaves. Mostly we just sit and hold hands, but last Sunday I sang her a few songs. She’s the only person I know who likes to hear me sing.