If you’re looking for a top-shelf factory AR, look no further 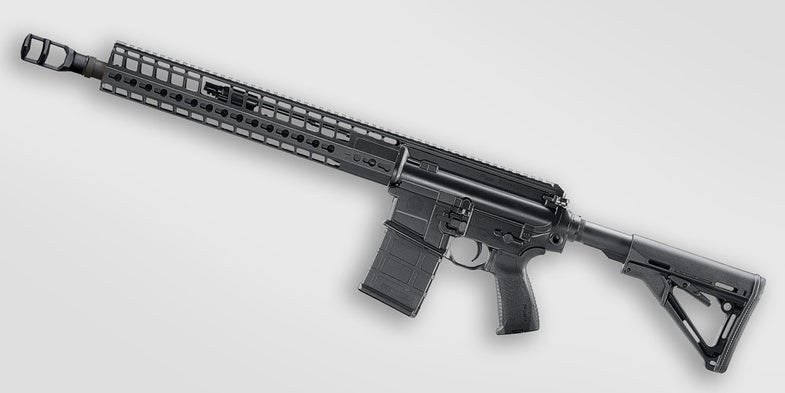 Let’s begin by translating some acronyms: “DMR” stands for “Designated Marksman Rifle,” and refers to the Marine and Army tactic of equipping a highly skilled shooter in a platoon, or squad, with a very accurate rifle and rather than have everyone blaze away, have the  Designated Marksman fire a single round or two.

Thus, a DMR rifle must, by definition, be considerably more accurate than a run of the mill AR, and it’s also much more likely to be in 7.62mm rather than 5.56, as the former is officially effective to 900 meters, while the latter is limited to 300.

The first model in the SIG DMR series was a piston rifle chambered in .308 with a Geissele match trigger and an 18-inch barrel. SIG said it was accurate, and SIG was not kidding. I got one, and it’s an authentic sub-MoA gun. (In fact, for the hell of it, I shot a 10-shot group that  measured sub-MoA.) I competed with it last summer, and found that it would do as well up to 600 yards as anything on the line, including custom ARs.

It is, however, heavy. In fact, it’s very heavy. With Leupold Mk 4 steel rings and a NightForce ATACR scope on board, it weighs 14.5 pounds, and a bipod brings it up to 15. I like it just as is, but other people complained, so SIG came up with the G2, which stands for Generation 2.

The G2 is not a modification. It’s an altogether different rifle. The Geissele trigger is history, replaced by SIG’s own trigger, which they call a Matchllite Duo. It’s two-stage, is advertised as breaking at 4.5 pounds, and does exactly that. It feels lighter because it’s very clean.

The original rifle’s 18-inch barrel, which came with a thread cap, has been replaced by a 16-inch tube that sports a muzzle brake as standard. On the plus side, this makes the rifle shorter and handier. The brake, combined with the rifle’s 8.5-pound weight, gas piston, and recoil absorber, reduces kick to a trifling nudge. On the negative side, it costs you some velocity and the combination of the short barrel and the muzzle brake produces a report that causes birds to fall out of the sky, bleeding from the eyes and nostrils. I wear both earplugs and headphones when I shoot it.

The previous handguard, which has four Picatinny rails and can saw through a telephone pole if you want to take the time, has been replaced by a KeyMod handguard, which is lighter, slimmer, and can actually be grasped by a human hand. You need to buy adapters for things like a sling, a bipod, or a vertical grip, but they cost very little.

The old Magpul stock, which had an adjustable butt and comb, and an adapter socket ahead of the toe of the stock that opened up under its own power until I glued it shut, has been replaced by a much simpler collapsible design.

The short-stroke gas piston remains, but the new one is redesigned and is simpler and easier to get at and adjust.

Most important, the feel of the rifle is completely different. You can pick it up and carry it and aim it offhand without wondering where you can get a truss. My rifle, with a Nightforce NXS 1X-4X in Nightforce Ultralight rings and a vertical grip, weighs 10 pounds even.

As far as accuracy goes, these are my 5-shot-group averages:

A word of caution is in order here. This is just the one rifle. The next G2 out of the factory might shoot much better, or not as well. In any event, with the Lake City, which the rifle really likes, you can shoot a 5-shot group, or a 10-shot group, or a 20-shot group, and your average will remain about 1.2 inches. The short, stiff barrel does not walk when it gets hot.

Three things struck me about the G2, as they did with the original 716: First, the uniformly high quality of everything—fit, finish, and smoothness of operation. Second, unfailing reliability. These rifles simply don’t malfunction. I shot the first-generation 716 filthy to see what would happen, and nothing happened. And finally, accuracy.

The list price for the G2 is $3,200, but the rifles are now becoming available (SIG could not keep up with the demand for a while) and are selling for considerably less. If you’re looking for the top end in ARs, here it is.