Since last week was SHOT Show, it seems only appropriate to feature a pair of 1911s in today’s gunfight. As... 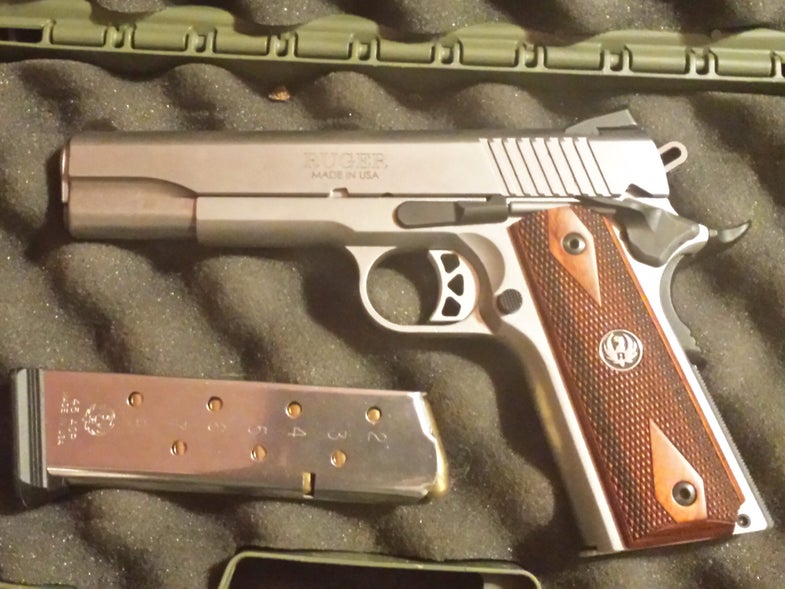 Since last week was SHOT Show, it seems only appropriate to feature a pair of 1911s in today’s gunfight. As I walked the aisles looking for shotguns, what I saw instead was handgun upon handgun. My first SHOT Show was 16 or 17 years ago, back when the firearms industry was still pretty much focused on hunting and target shooting. Now, since gun-buying tastes have changed, semi-auto handguns have become the most popular type of firearm, and handguns and black guns are the big deal at SHOT. It makes me, with my fondness for wooden stocks and break actions, feel like a dinosaur. And, just as I’m sure the dinosaurs got kind of grumpy watching the mammals take over, so I feel out of sorts in my tie with little shotshells on it, when everyone around me is wearing tattoos and tactical gear.

Since I can’t beat them, today I am joining them and putting up a gunfight between two versions of John Browning’s classic. One is making its second appearance on GFF, although it looks much different now than it did on its first go-round. The other is new, both to GFF and to its owner.

This is my Ruger SR1911 that I just bought back in August. I don’t have much history with this gun other than watching old war movies and loving the lines of the 1911 pistol. Since I have smallish hands, the single-stack magazine and thin grips make it easy to shoot, and, though I’ve put only 50 rounds through it, it does shoot. I just love the color of the cocobolo grips and the stainless frame and slide. This probably won’t be my last 1911, but it will always be my first.

This gun started as a stock Kimber Custom II—my first 1911. It’s my IDPA gun, and has now been completely gutted and replaced, mostly with Wilson components, including the threaded match barrel. The grips I made from cocobolo one slow weekend, and a buddy milled the dimples for me. It has recently come back from the Cerakote shop with a Sniper Grey honeycomb design on the slide. I also just got my stamp back on this SilencerCo Octane 45k. It’s my third SilencerCo suppressor. Suppressors are like Pringles: once you pop, you can’t stop. It is so enjoyable to shoot without the boom. And it really makes the intro to new shooters a pleasurable experience.

There are your choices: an out of the box Ruger, or a heavily doctored and suppressed Kimber. Vote and comment below, and keep the gun photos coming to fsgunnuts@gmail.com.