Gunfight Friday had been running on empty picture-wise, when these two perfectly matched-up rifles landed in my inbox on the... 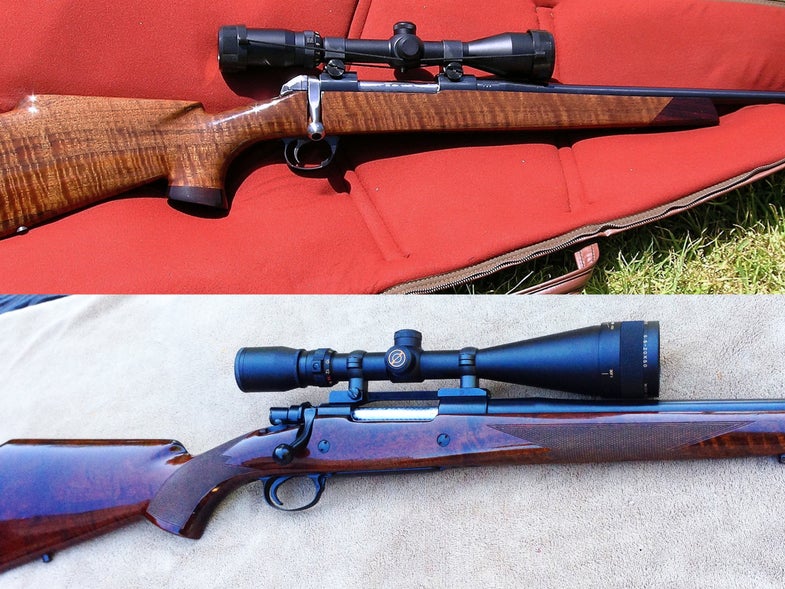 Gunfight Friday had been running on empty picture-wise, when these two perfectly matched-up rifles landed in my inbox on the same day: two 7mms from the 1960s. What are the odds? It’s a Gunfight Friday miracle.

One of the rifles is a chambered for the flat-shooting 7mm Remington Magnum, a cartridge that has been around since 1962. The other is made for the even flatter shooting 7mm STW, developed as a wildcat by gunwriter Layne Simpson (with whom I hunted waterfowl in Canada last week. He is doing well) and legitimized as a factory offering in 1996.

This Browning Safari Grade rifle was originally purchased in 1969 in 7mm Rem Mag. I later learned this was a salt-stock, and that the barrel had corroded the length of the stock. I shipped it to McGown Barrels for repairs, and they installed their 26-inch barrel in 7mm STW, when it was still a wildcat cartridge. They sealed and buffed the stock, teflon coated all the metal, lapped the bolt, and installed a Timney trigger.

This rifle consistently shoots three-shot groups at 100 yards that can be covered with a dime. The 6.5X20 scope recently replaced a 3X9, and I have yet to try it out. I have taken moose and caribou with this rifle and hope to take a few more before my days run out.

I bought a Herter’s U9 7mm Rem Mag barreled action in 1967. It has a Douglas barrel on a BSA long action. I paid $79.50 for it. I fully glass embedded it in a Herter’s $40 American walnut stock. Recently, I refinished the stock and replaced the recoil pad with a Limbsaver pad, which really reduces the recoil. The gun shoots less than MOA with Berger 140 grain VLD bullets. The trigger is adjustable without having to remove the action from the stock. I mounted a Herter’s rangefinder scope, which cost $52.95, on it. I took a deer at 400 yards using the scope. I’ve taken a bear, two whitetail deer, two mule deer, a pig, and a goat with it, too. It was in storage for 18 years, since family life didn’t leave time for hunting, but it is in great shape and a long way from being shot out.

There are your choices—and they are two awfully good ones. By the way, the salt-wood stock Tom refers to came from a batch of walnut purchased by Browning in the 1960s that had been dried with salt. Unfortunately, the salt remained in the wood, and it ate away at any metal parts it touched. And, apropos of very little, I loved to look at the pages and pages of gunstock pictures in my dad’s phonebook-thick Herter’s catalogs of the 1960s, and here in this gunfight, we have one of these stocks. Incidentally, not counting the Limbsaver pad, Hugh has less than $200 in that rifle. I’d say he did pretty well.

Vote and comment below, and please send me more gun pictures to fsgunnuts@gmail.com.