Some weeks I have to painstakingly comb the Gunfight Friday archives to find a good matchup. Other weeks, a good... 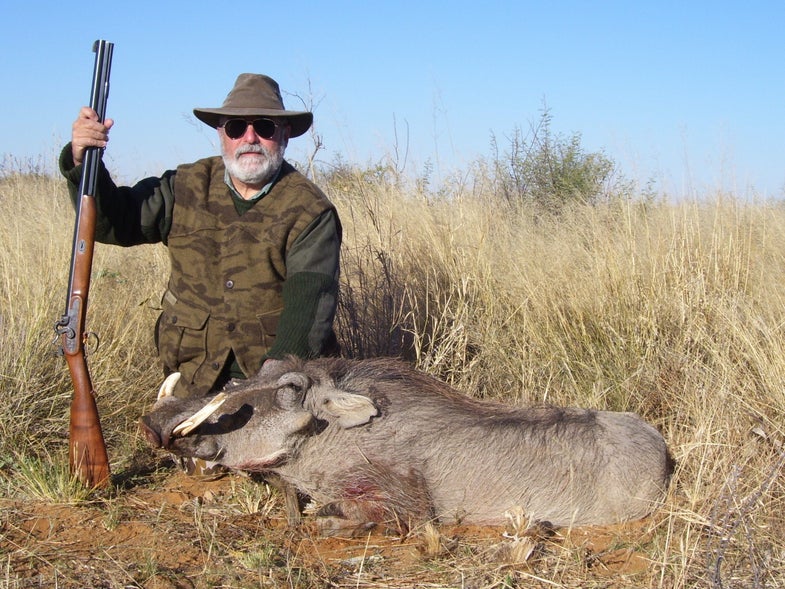 Jeff's New Englander, which he brought on safari to hunt warthog..
SHARE

Some weeks I have to painstakingly comb the Gunfight Friday archives to find a good matchup. Other weeks, a good one falls into my lap, as is the case this week. We don’t often feature blackpowder guns here, mostly because I don’t get many pictures of front-loaders, but today we’ve got a couple of good ones. Both are modern guns made in the traditional side-hammer style. One is flintlock long rifle. This one is a .50 caliber, and while most long rifles started out as smaller calibers, many were bored out to larger calibers as they rusted, so a .50-caliber flintlock long rifle isn’t a complete anachronism. The other is a Hawken-style percussion rifle of the kind used by the mountain men in the West, with a period-appropriate big bore.

I built my own long rifle years ago. It has a curly maple stock I carved from a blank, a siler lock, and a .50-caliber Green Mountain barrel. It’s pretty accurate, and when I could see well enough for iron sights, it killed a nice 6-point buck with it.

This is my Thompson/Center New Englander rifle, in .54 caliber. I bought it brand new years ago; in my hands it has accounted for 16 whitetails and a large African warthog, all of them one-shot kills.

I opted for the .54, and I’m glad I did. It hits like The Hammer of Thor and has never failed me. I use round balls pretty much exclusively and never bother with conical bullets, except for that once with the warthog. The only modification to the rifle is a T/C peep rear sight better suited to my aging eyes than the open sights it came with.

There are your choices: flintlock versus percussion, and .50 versus .54. It’s nice to see these two guns making meat in this era of plastic-stocked inlines. Vote and comment below, and keep those gun pictures coming to fsgunnuts@gmail.com.

Which gun do you prefer?
Rifles