Thanks to all of you who sent in pictures for Gunfight Friday. Not only did I receive enough pictures to... 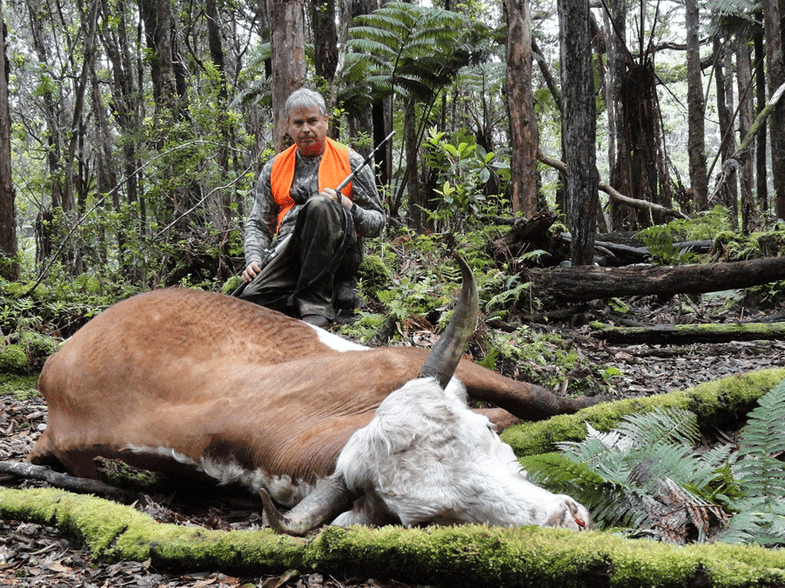 Thanks to all of you who sent in pictures for Gunfight Friday. Not only did I receive enough pictures to keep the lights on at GFF for a while, as a bonus, I received this picture from Bruce, and we’ll be featuring one of his guns in next week’s fight. This gunfight requires a lengthy setup, which has to do with this picture and a big-game animal many of us might not be aware of. So, instead of a normal gunfight, we’re going to take a detour this week in preparation for next week’s matchup.

My wife and I moved to the Big Island of Hawaii a decade ago and for the last three years, I have been living in Big Game Hunter Heaven. Cattle were introduced to the Big Island more than 200 years ago and thousands of them still live back in the darkest recesses of the jungle. There are many coffee farms along the fringes of the jungle and from time to time, wild cattle venture down and do their thing, which is to destroy coffee trees, charge coffee workers, and even do battle with cars and trucks. On this last matter—one particularly large bull charged a farmer’s SUV and pounded the grill back into the radiator before wobbling off into the jungle.

So, when the cattle create problems, the coffee farmers call me and I eradicate them (the cattle, not the farmers). Over the past three years, I have taken 20-plus head, many of them huge bulls. I keep about a hundred pounds of beef per year for myself and give the other ton or so to the workers. The beef is delicious, albeit a bit tough, but twice ground it makes the best hormone-free hamburgers on earth. I let the carcasses sit for about three days and then sneak back in the early morning. Wild pigs abound in the jungle, and there is nothing they like more than a big pile of rotting beef. I can count on at least one pig for every head of cattle that I harvest.

Hunting these cattle is no walk in the pasture. They are extremely wary, and hunting them in the jungle is like stalking bull elk in heavy timber. A long shot is 50 yards. Two have charged me, dropping at 10 yards or so. A large bull is 1,200 pounds, and they move surprisingly fast, even in heavy brush.

How cool is that? And who knew? Not me, certainly. I grew up around cattle, and I wouldn’t mind shooting one. Also, I’ve never been to Hawaii. When we reconvene next week, we’ll have a pair of feral cow rifles to debate. Meantime, I would expect Google searches for “Big Island Airfare” and “Feral Cow Calibers” to spike.