The “Baby Browning” in .25 ACP was designed in 1927 by Dieudonné Saive based on John Browning’s work. The tiny... 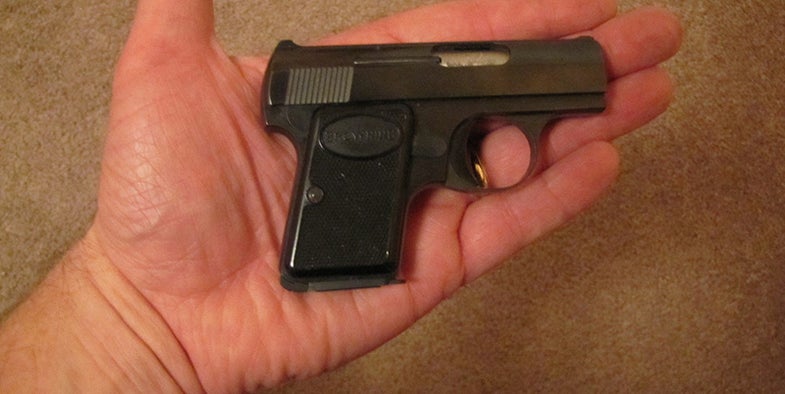 The “Baby Browning” in .25 ACP was designed in 1927 by Dieudonné Saive based on John Browning’s work. The tiny six-shot pistol was easy to conceal. Pocket pistols were originally called “vest pocket pistols” and vest pockets are small. It found favor with the French resistance in World War II and it was issued to USAF pilots in Vietnam.

The Remington Model 51 was made from 1916 to 1927. Designed by John Pedersen, inventor of the Ithaca 37 and many other guns, the 51 used a “hesitation lock” action, a unique action in which the breech block does a sort of stutter step, that allowed it to be built smaller and lighter than blowback actions. It was chambered for .380 and .32 calibers.

The Remington 51 in .380 is an example of 1920’s personal protection pocket pistol.  I have had this gun for almost 50 years and  as a young man carried it regularly on a night job that took me to all kinds of places. The Model 51 was always close at hand. In all the time I have had it, I think I have fired it six or eight times just to make sure it functioned okay. It does.

This is a Browning Model 35 “Baby Browning.”  It was not a terribly successful firearm, and from the history I’ve read, it was a deviation from the original John Browning design. It is tiny, and fits nicely in an ankle holster as a backup weapon. It is stamped “6mm,” and shoots .25 ACP ammo. This particular piece was manufactured in 1968 (according to the serial number and information provided by Browning), and belonged to my uncle. When he died, I inherited it. I’d never seen one before. With one finger on the trigger, your middle finger holds the pistol’s grip. That’s it. It jumps a little when I shoot it, and the slide will skin the web of my thumb if I’m not careful. If I were going to carry a backup piece in an ankle holster (I’m not) I’d probably choose a little .380. My everyday carry is a Glock 26, and I’ll probably never carry this Baby Browning, but it is still an interesting piece, and fun to shoot if I take care to grip it right.

There are your choices: two interesting pieces of handgun history, one small, one even smaller. Vote and comment below, and keep the gun pictures coming to fsgunnuts@gmail.com