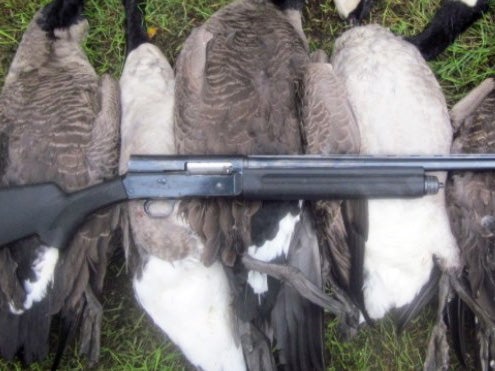 Today’s gunfight pits a pair of heavyweights against each other: the Browning Auto 5 and the Remington 1100. They are, inarguably, the two most important semi-autos ever made. John Browning invented the semi-automatic shotgun in 1900 with the Auto 5, and his design reigned unchallenged until 1963, when Remington’s engineers, aided by giant, 1960s-era computers, came up with the 1100.

Browning’s gun was a work of genius, but it required shooters to shift friction rings around to make it work with different loads; it had an odd, shuffling feeling when you fired it (I started out with an Auto 5 and never noticed the funny firing behavior until I started shooting other guns); and it had a blocky, square receiver you either liked or you didn’t.

The 1100 wasn’t the first gas gun, but it was the first reliable gas gun. It had no friction rings, it had modern lines, and it had the lightest-felt recoil of any shotgun. It’s still one of the softest shooters around, although you do have to keep 1100s clean to keep them running. Despite their age, both guns are more than capable of filling limits of ducks and geese.

I bought this Japanese-made Browning A-5 magnum twelve this past spring. I do a lot of goose hunting, and 50 years of shooting magnum loads in my old pump has literally shaken my eyeballs to pieces, so I finally picked up something with less recoil. The Magnum Twelve has choke tubes so it became my trap/skeet/clays gun. But just as goose season was kicking into high gear this year, the forend shattered at sporting clays. Because the A-5’s recoiling barrel slams into the forend at the end of cycling, the walnut often breaks down and splits after extended use. I ordered a factory replacement walnut fore end ($$!) for shooting at the range (where cosmetics is so important for good shooting!) and Champion synthetic stock and forend for the field. Changing the stock only requires removing a tang screw. The gun has worked well this fall for both geese and pheasants.

I bought this Remington 1100 second hand to use as my duck and goose gun. At 8 pounds, 5 ounces, it is heavy enough to soak up the recoil from heavy 3-inch steel duck loads. Also, the 1100 is one of the softest-recoiling shotguns I have ever shot. The 30-inch barrel has been bored out to Light Modified. I know where a morning flight of honkers comes in, and I can’t wait to use the 1100 on them.

There are your choices. Vote and comment below and keep the gun pictures coming to fsgunnuts@gmail.com.

Which gun do you prefer?
Shotguns