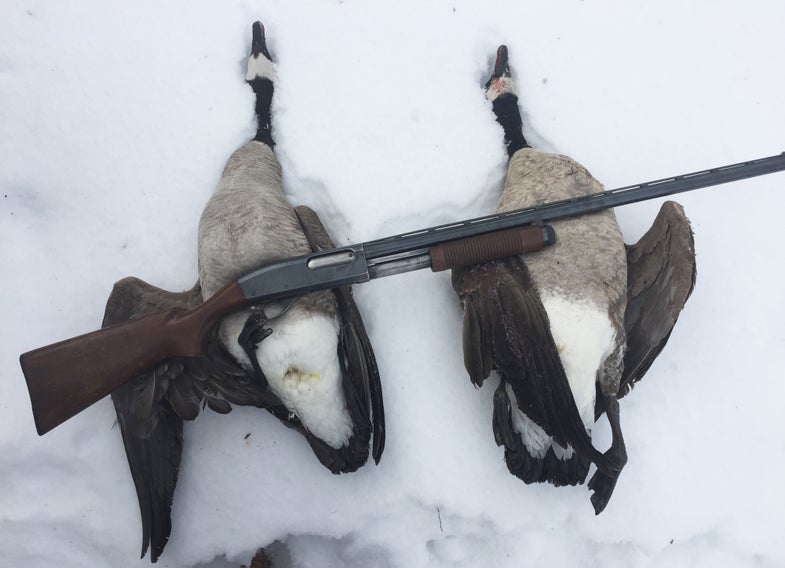 The Remington 870 needs no introduction, since it’s the best-selling shotgun of all time, with more than 11,000,000 made. Almost everybody has one, and some folks have several, and no doubt a lot of those 870s have stories.

Each of today’s guns comes with a tale, and represent two different eras of the 870: one is the old ringtail forend model from the 1950s; the other is the model with pressed fleur-de-lis checkering from the 1960s and 1970s that I always think of when someone says “Wingmaster.”

This old Remington 870 was originally my father’s. He bought it in the early 1950s on credit, paying it off at $5 per month. After he couldn’t hunt anymore I inherited it and put on a 28-inch pipe with screw-in chokes to replace the original 30-inch Full choke tube. The gun fits me well, and the new barrel altered the balance, so that it points just a bit quicker but is still slightly muzzle heavy. It has become my shotgun of choice when I’m going on a hunt where conditions are tough. Whether I’m falling down while chukar hunting on snowy hillsides or splashing across a barely open creek at -30 degrees, I can count on this old veteran to keep on working no matter what. Its stock is scarred and much of its original blue is gone, but to me it’s still a thing of beauty that won’t let me down. This year it accounted for 12 geese (two of which you see here) and we also nailed for seven chukars with eight shots. I think I’ll keep it.

Fifteen years ago I lived in the big city and had a neighbor named Mark. He was a great guy. He always had a cold beer handy, never complained about the noise from the kids, and built a great fence. He told me that he hunted lots in Kansas when he was young with his dad, and due to career choices he had sort of fallen out of hunting. He was thrilled to get the odd pheasant or package of deer meat from me.

I ended up getting a place in the country and moved and got a call from Mark several years after I moved. Turns out he had gotten married and had a son. When his dad passed, Mark got all the guns that they used to hunt with. He wanted to get back to hunting and asked me if I would help him. The answer was yes, and we started to hunt together. We had five great years of hunting. Mark got cancer and managed to beat it, and we carried on. A couple of years later, the cancer came back it was not good.

I took him out for his last hunt; we got a couple of roosters and a nice whitetail buck with his 870, the gun his dad had bought him. When Mark passed, he willed his 870 to me and I told his wife that I would only hold on to the gun until his son was ready to try to hunt. The gun is a Remington 870 with a 28-inch barrel, and adjustable chokes, and chambered for 2¾- and 3-inch shells. Mark bought a slug barrel for it, too. I have used the gun a couple of times and always have a great hunt with it.

Which gun do you prefer?
Shotguns
gunfight friday
Remington Arms