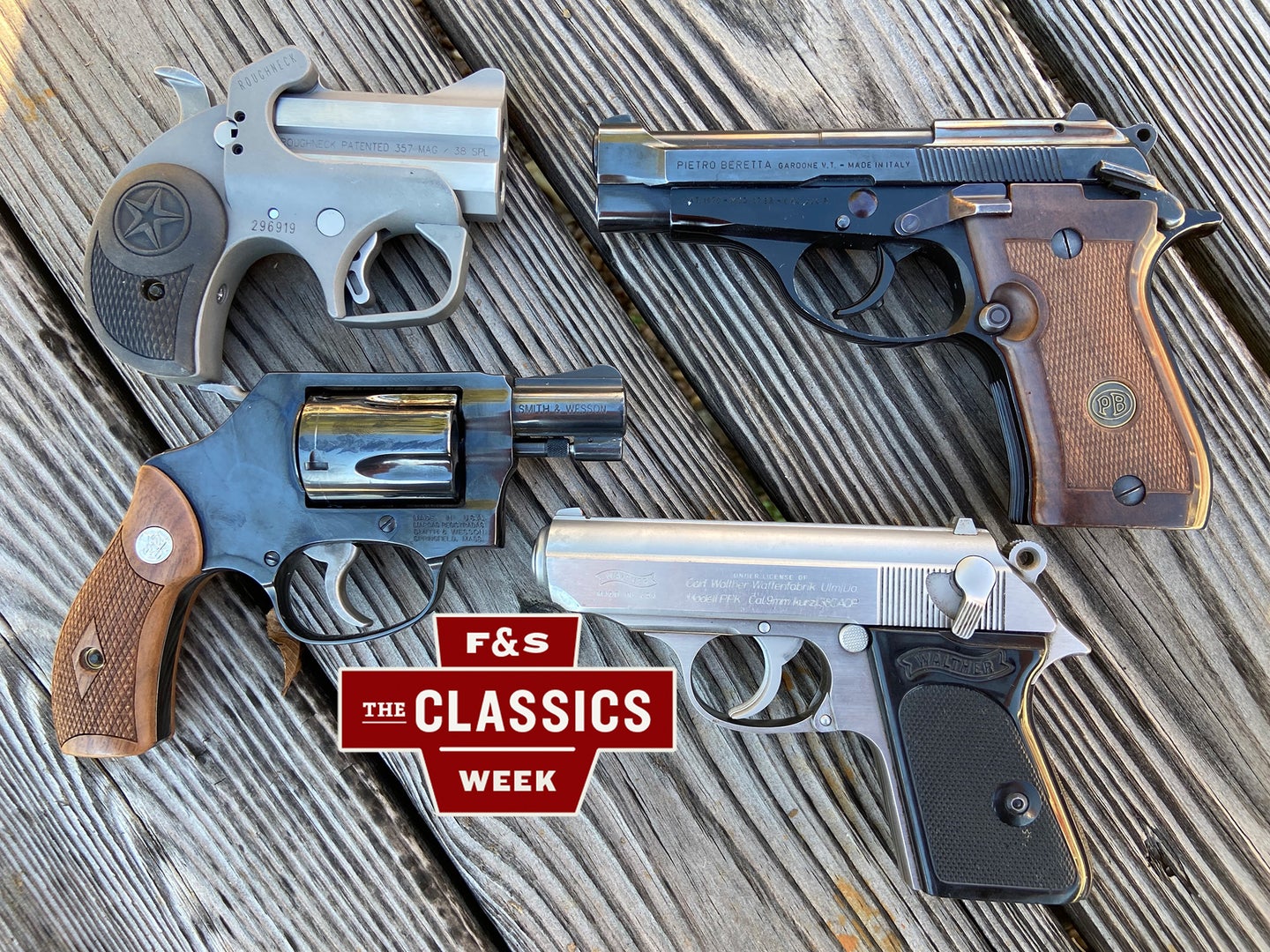 Many modern handguns pack 10 or more rounds of 9mm into a polymer frame that’ll fit in a pocket. Those guns generally have good sights and triggers—and increasingly, they’re designed to be paired with a reflex-style electronic sight. So why would you choose anything less capable for the serious business of concealed carry?

Truth be told, there’s vanity involved in handgun selection, and many vintage models are just better looking than the rest. And they still shoot just fine. Nobody’s making you carry one in lieu of a more modern design but you can if you want and still be well armed. It’s America, by God.

So how did I come up with this list of classics? By devising my own strict rules, of course. The 1911 is a classic pistol, but it takes a big pocket to hide it. The Detective Special isn’t here because Colt’s not making it right now. (I wish they were). All these guns are still in production (even if limited production), and I have personal experience with each of them. Because they’re classics, I’m betting lots of other people do, too.

There’s another .380 on this list that gets all the glory, and I’ll take more about it in a bit. But I like these Berettas better. The mid-size series included the 84 FS Cheetah, which had a 13-round double-stack magazine, as well as the tip-up barrel Model 86. There were other 80 series guns available in .32 ACP and .22 Long Rifle, too, including the .22 Model 87 BB that I’ve personally owned for years. That gun that was made in Italy, and I paid a little too much money for it after finding it used on GunBroker 10 years ago. Unlike many small .22 auto-pistols, this one is gem quality, with a slide feels as if it’s gliding across polished ball bearings. It is also one of the most reliable .22 LR autoloaders I’ve shot, and accurate too. I carry it out frog hunting and fishing because, as the old saying goes, you can’t give rednecks nice things. Loaded with CCI Stingers, 15-yard bullfrogs are in trouble.

The 80 Series has been described as a scaled-down 92FS and though they share some cosmetic similarities, they’re not at all the same gun. Cheetahs are blowback operated, and though they are SA/DA, they do not have a decocking safety like the model 92. My 87 (and I’m assuming the others) can be “cocked and locked” with the hammer back and safety engaged. It also has a magazine disconnect safety that’s more of an aggravation than a feature toward which I have a strong moral objection.

Read Next: The 30 Coolest Handguns

Some people carry rimfires for defense, but I won’t (that’s why guns like the 21A Bobcat—which I’ve also owned—aren’t on this list). But my 87 is so well balanced, easy to shoot, and nice that I decided long ago to snatch up one of the .380 ACP guns, should I ever find one sitting used on a shelf. That might be a while, since used Cheetahs aren’t cheap. The guns are still in production but apparently, Beretta only imports limited quantities of them to the states.

The Cheetah has armed some iconic movie characters, including Frank Costello in The Departed and Trinity in The Matrix. Hollywood appeal aside, given the Ruger LCPs of the world that are a fraction of the size and price and in the same caliber, you might think the Cheetah is obsolete, and I hope that you do. Maybe you’ll see a used one for sale and skip over it—and I’ll buy it myself.

What’s in a Texan’s pocket? Perhaps a tiny double-barreled shotgun or .357 Magnum, manufactured in Texas…by Texans. That’s just what it says on a Bond Arms derringer box, the modern version of one of history’s most iconic pocket guns.

The original Deringer pistol was a single-shot percussion gun designed by Henry Deringer (one r, not two— though the generic gun name is now spelled with two). That gun is infamous as the one used by John Wilkes Booth to assassinate President Abraham Lincoln. The Remington Model 95 came later, and it was the over/under double-barrel derringer that most people envision upon hearing the word. It’s perhaps the most derided handgun in history, synonymous with saloons and brothels where, if a raging syphilis infection didn’t kill you, the infection caused by a hit to the gut from the derringer’s rimfire .41 Short round just might.

The knock-offs of the Model 95 didn’t improve the derringer’s image much. I once paid $65 to a pawn shop owner for a Davis derringer in .22 LR, which was sold with a disclaimer: “Ain’t no guarantees on that piece of shit.” He described it perfectly.

Ironically, that reputation is one of the exact reasons Greg Bond set out to build the Bond Arms derringer back in 1993. “Like many serious gun guys, Greg didn’t care much for derringers, and so he decided to try and make a big improvement to the old design,” says Gordon Bond, Greg Bond’s brother and the now president of Bond Arms. “Those old derringers were dangerous throwaway guns. Hammers laid right on the firing pins, touching primers. Greg wanted to build something he’d be proud to own himself.”

The all-steel guns with names like “Rowdy” and “Roughneck” have lines that harken back to the Remington derringer but really, they’re designs all their own with fine craftsmanship. Handle one, and you figure it’ll last probably forever. For years, the Bond derringers were niche guns popular in the cowboy action circuit. But when the concealed handgun market exploded in the late ‘90s and early 2000s, Gordon Bond says they became even more popular. Interchangeable barrels are available in numerous lengths (2.5 to 4.25 inches) and in just about any handgun caliber you’d want. The most popular is the .45 Long Colt/.410 shotshell, and one of the test guns I have—a 3-inch Rowdy—throws a surprisingly good pattern with 2 ½-inch .410 birdshot out to 10 feet or so. I’ve heard people mock the idea of a “snake gun,” but they’re mostly Yankees who don’t live around venomous snakes. Texans damn sure understand, and that’s no doubt why many .410 derringers are sold.

These guns are heavy for the size, and they only hold two shots. But that flat profile and the small dimensions makes them very easy to conceal—and that’s the same thing that made the Remington a popular carry gun for more than 70 years. But the Bond Arms versions are dead-nuts reliable, safe, and easier to shoot than you might guess. (Recoil from the .357 shown isn’t much different than from a snubby revolver.) You could sweat on them for a lifetime and still expect them to shoot. The fact that those two shots are available in calibers sometimes recommended for bear defense is a step up from the .41 rimfire, too.

Plenty of people who know more than me about handguns still rely on J-frame revolvers for every day concealed carry, and the Model 36 “Chief’s Special” is the OG. The five-shot .38 Special made its debut, according to Smith & Wesson, at the International Association of the Chiefs of Police conference in 1950, where the gun got its name. The J-frame revolver went on to become one of the most popular personal defense and concealed carry guns ever made—and it remains so to this day.

When I was a kid, a S&W .38 “snubnose” was the gun a lot of good men seemed to own for self defense. My grandfather wasn’t in law enforcement and wasn’t even much of a gun guy, but he was the fiercely independent type. He carried a Model 36 in his coat pocket about every day, and affectionately called it his “five-hole rotator.” He came from a coal-mining background, and so did all of the old men he hung around with. Like him, most of them weren’t gun guys, either, but they were all armed with a .38. I remember seeing the blued frame, skinny wooden grip, and snubbed barrel and recognizing it as something lethal and dangerous, but also a tool carried by men of good character.

There’ve of course been many iterations of the J-frame. I own four of them including a pair of Airweight .38s that I carry often, and a stainless Model 63 “Kit Gun” in .22 Long Rifle that is on my hip all of trapping season. But the best-looking gun of the lineup is still the Model 36. The modern one is a redux of the original Chief’s Special, available in the S&W Classics line. It’s been updated with things like .38 +P capability and a transfer bar and frame-mounted firing pin (the originals had hammer mounted firing pins). Unlike the originals, the Classic series gun has a frame-mounted safety lock, too. That feature causes some people to lose sleep at night, but I don’t really care. This gun, with a little extra heft over the Airweights, is easier for me to shoot than any other centerfire J-frame, and it gets my vote as the most practical EDC gun on this list.

Up top, I asked the question of why anyone would want to choose one of these vintage guns for CCW when so many better, more modern options are available? The Walther PPK might not answer all of that, but it at least proves the phenomenon is real. The Glock 43, by comparison, is about the same dimensional size but a few ounces lighter. It carries as many shots, but of far more powerful 9mm Luger. The Glock is also, I’d argue, easier to shoot, with a better trigger.

My dad’s Walther PPK, on the other hand, has a shitty trigger and vicious recoil out of proportion to the caliber and made worse by the gun’s notorious habit of “biting” the top of your hand with the slide. The PPK’s reputation for reliability is, in my experience, a little overhyped. It works well with ball ammo, provided the gun is kept clean. All that considered, and it still costs damn near twice what the Glock costs.

You have to wonder: Why would anyone carry this gun?

Because James Bond did. And so did Bill Costigan in The Departed (a far better movie than any of the 007 films). It’s single best cinematic appearance (though it could’ve been a PP and not a PPK) was during the bar-room fight in Inglorious Basterds. “Say ‘auf weidersehen‘ to your Nazi balls.”

Few guns have been better immortalized by Hollywood, and that is why so many of them are still sold today. Plus, despite the shortcomings, the PPK is still one fine-looking pistol.

In real life, the German-designed Walther PP (Polizeipistole) and PPK (Polizeipistole Kriminal) was among the world’s first successful DA/SA autopistols. It was issued to officers of the German military during World War II, and was reportedly the personal gun of Adolf Hitler—which he used to kill himself. The PPK has been available in .32 ACP, .25 ACP, and .22 Long Rifle but in the U.S., the .380 ACP version is most popular.

Importation of the PPK was restricted by the Gun Control Act of 1968, but for a time the guns were built at various facilities in the states, under license (that’s where my dad’s PPK, an Interarms version, came from). Today, the PPK and PPK/S are built in Walther’s Forth Smith, Arkansas factory, and though the design has been enhanced a bit (I’m told the new ones have better triggers), it’s basically the same 6+1 capacity blowback .380 that debuted in 1929. And it still fits into a pocket just as well today.