Here is an easy, and versatile, shooting drill for hunters 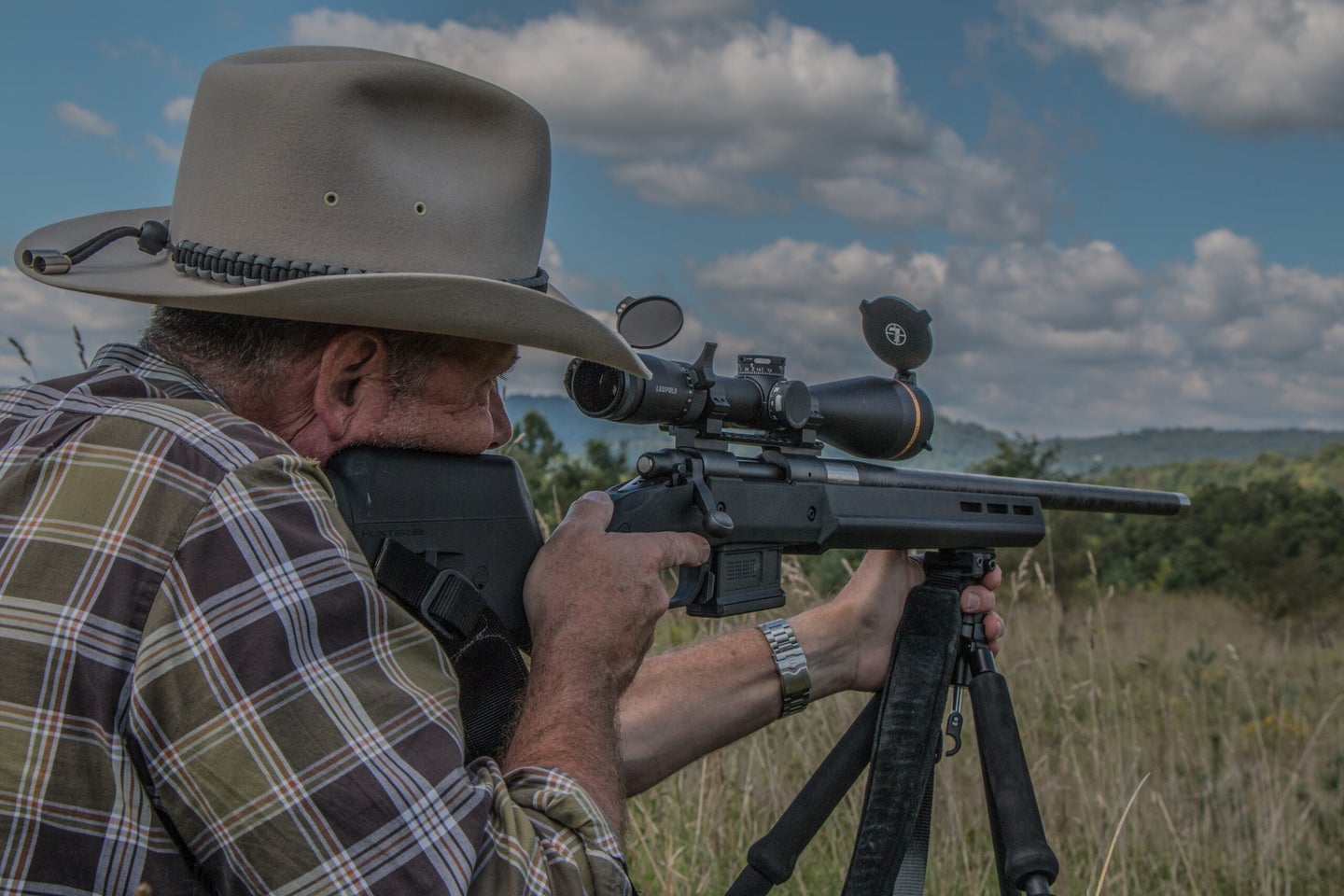 The slow-and-fast drill can be conducted from any position and distance where it is safe to shoot steel targets. Richard Mann
SHARE

This is the third installment in a series of shooting drills designed to improve your accuracy at the range—and in the field. For additional shooting instruction, check out the following stories: The Stewart Edward White Drill and The General Purpose Rifle Drill.

When I first saw the two coyotes, they were cresting a ridgeline at about 300 yards and headed my way. They dropped into a little hollow and next appeared on another ridgeline at about 150 yards. I already had the rifle on the shooting sticks and I had time, so I took it. I lined up the reticle on the larger of the two song dogs and gently pressed the trigger. The big male coyote slumped into a pile, and his mate took off. I racked the bolt and swung the rifle with her. My buddy barked on the call and she made the mistake of stopping. Two coyotes in less than five seconds

Sometimes you make brag-worthy shots like this and sometime real-life instances inspire training drills. The famous Mozambique or Failure Drill commonly used in defensive handgun training was popularized by Jeff Cooper and was inspired by an actual self-defense encounter in Mozambique during their war of independence. Obviously, I’m no Jeff Cooper, but the coyote-whacking incident above is an instance that routinely occurs while hunting coyotes and even other critters, so I thought it too deserved a training drill.

I call this drill the Slow & Fast Drill—which, though very descriptive, is an uninspiring name. Maybe I should take Cooper’s lead and call it the Wyoming Drill, because that’s where I shot those two coyotes. Or maybe, the Coyote Drill. At any rate, the idea of this drill is that you have plenty of time to make your first shot, but a follow-up shot on a similar target at a similar distance must occur within five seconds of the first shot.

The cool thing about this drill is that it can be performed at any distance and from any position. You can shoot standing and off-hand at 100 yards, from the seated position at 200 yards. You can use shooting sticks or a tripod, and you can even stretch the distance and go long and prone. It really does not matter the position you shoot from or the support you use, this drill is all about managing recoil and making a speedy transition from a deliberate first shot to a fast follow up.

For a target, I would suggest steel because it gives audible and visual feedback. You need that verification of the first hit before you attempt the second shot at the second target. Pick whatever target size you like, but for hunters something close to kill-zone size—about eight inches—makes sense. Ideally, at whatever distance you intend to shoot, the two targets should be laterally separated by at least 50 yards. This will require you to track left or right after the first shot to find the second target.

You’ll also need a shot timer, but with this drill you use the shot timer a little different than during most shooting drills. To start, get in whatever position you want to shoot from, then dial-in any distance and wind corrections you might need. When you’re ready, have a buddy to hit the start button on the shot timer. After you hear the beep, take as long as you like to make that first shot, because if you miss the first shot, you fail.

How to Improve at the Slow and Fast Drill

As soon as you see or hear confirmation of that first shot hit, transition to the second target and attempt to get a hit on it as fast as you possibly can. This is where it’s different with the shot timer: Let’s say the total time for the two-shot engagement is 18 seconds. The total time does not matter; what matters is the time between the first shot and the second shot. You can find this using the review button on the shot timer, and some shot timers even show the split time between the last two shots.

The goal with this drill is to get the second hit in five seconds or less. There is no complicated scoring procedure, the faster you get that second hit, the better. This is a great drill to conduct at any distance it’s safe to shoot steel targets, and to complete it to standard you must manage the recoil of the rifle well, and have a smooth follow through and subsequent trigger press.