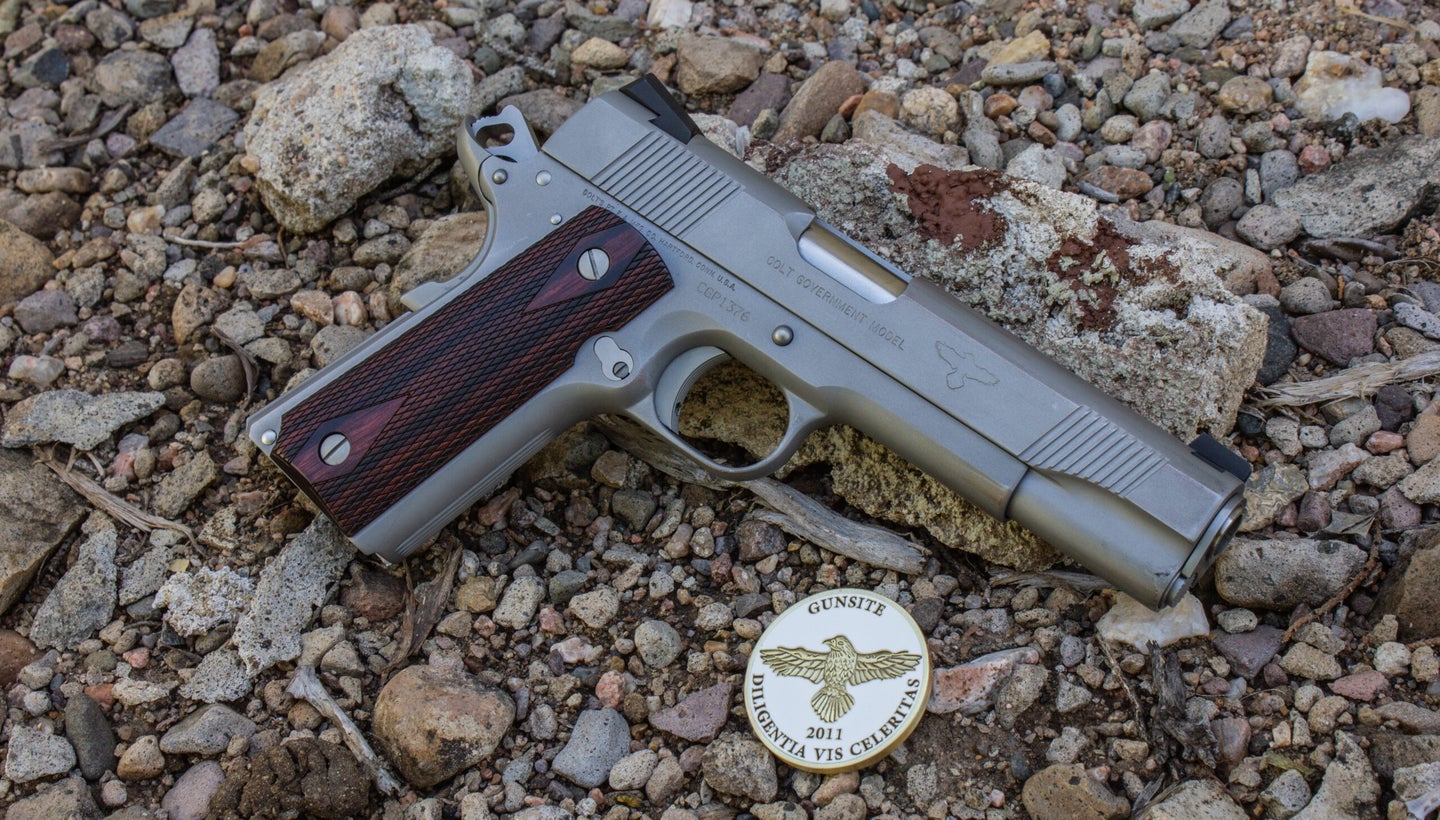 A Colt 1911 is the foundation for the Gunsite Service Pistol. It can be purchased at Gunsite Academy, which was founded by former Marine Jeff Cooper, and is the oldest and largest civilian firearms training school in the world. Richard Mann
SHARE

On the evening of  September 29, 1918, the throaty roar of an eight-cylinder Hispano-Suiza engine was heard over the small town of Murvaux, France. Residents and German soldiers saw an airplane coming in low. A mile to the west, smoke filled the air where a German observation balloon had once been. The plane glided into a meadow and the pilot—shot through the chest by a single machine gun bullet—crawled from the cockpit as German soldiers approached. He collapsed just short of getting to cover. But before succumbing to his wound, he drew his 1911 and engaged the enemy.

Seven months later in Phoenix, Arizona the Congressional Medal of Honor was presented to the pilot’s father. Frank Luke became the first United States airman to receive the medal. The Great Eddie Rickenbacker said that Luke “…was the most daring aviator and greatest fighter pilot of the entire war…He went on a rampage and shot down fourteen enemy aircraft, including ten balloons, in eight days. No other ace, even the dreaded Richthofen, had ever come close to that.”

That was not the only time an American serviceman would earn our countries’ highest military honor while armed with a 1911. In November 1919, Second Lieutenant Herman Hanneken was given the medal for actions he took in Haiti. And the list goes on with names like Samuel Woodfill and Alvin York. The deeds of these three soldiers are celebrated at Gunsite Academy with ranges named in their honor.

The stories of those who carried the 1911 are legendary. Within those stories are the kinds of things that elevate a gun from being a mere sidearm to the level of Excalibur, or as Jeff Cooper described it, the “Yankee Fist.”

So revered was the 1911 that it remained the issue sidearm of America’s armed forces for 74 years. In fact, even today, elite American combat operatives rely on 1911s. Designed by firearms genius John Browning, the Colt 1911 was chambered for the .45 ACP—a cartridge that’s now as esteemed as the pistol it was created for. To meet military demand during the first World War, 1911s would be built by many different manufacturers. Today, now that Colt’s patent on the design has expired, 1911s are manufactured by Colt, Kimber, Springfield Armory, Smith & Wesson, Sig Sauer, Rock Island Armory, Dan Wesson, Ruger, and many, many others, not to mention high-end custom offerings from shops like Wilson Combat.

Though we are now solidly in the age of the polymer pistol, the popularity of the 1911 has not waned. And while modern versions offer a litany of upgrades, the basic single-action, linked-barrel design remains. It has proven to be a nearly indestructible pistol that will last several lifetimes. Admittedly, some representations of the design are less than stellar, and that combined with cheap magazines, cheaper parts, and garage-based gun plumbers, has left the 1911 with a reputation of questionable reliability. But a well-assembled 1911 is sewing-machine smooth and a gun you can trust your life—or country—to.

The 1911 Finds a Home in The Civilian Market

In 1929 Colt began offering the 1911 chambered for the .38 Super and 20 years later introduced the Commander version of the 1911 which had a shortened slide, a 4.25-inch barrel, and an aluminum frame. It was the first Colt chambered in 9mm Luger. Due to its lighter weight and compact size, this pistol became a favorite for daily carry, and many consider it one of the greatest civilian self-defense pistols ever manufactured. In 1970 Colt introduced the Combat Commander, which was the same pistol with a steel frame, and the aluminum-framed version became known as the Lightweight Commander.

Competition Shooters and Custom Gun Makers Pick Up The 1911

In 1985, Colt introduced another version of the 1911 known as the Officer’s Model. This pistol had a shortened grip frame and a barrel that was only 3.5 inches long. The following year a lightweight aluminum-frame version of this same pistol was offered. The significance of Colt’s 1911s in three distinct sizes and different weights cannot be overlooked because it set the standard manufactures of all modern defensive handguns follow today by offering full (duty), compact, and ultra-compact versions of the same pistol.

That same year the Colt 1911 was replaced by the Beretta M9 as the general issue service weapon for the United States military. There was also growing popularity of matches sanctioned by the combat pistol league known as IPSC (International Practical Shooting Confederation). In 1981, American, Ross Seyfried had won the 5th IPSC World Shoot, which was held in Johannesburg, South Africa, with a basically stock Colt 1911.

1985 also saw the emergence of a new company known as Para-Ordnance. Para-Ordnance was the originator of the high-capacity, double-stacked 1911, as well as the first to manufacture a double-action only 1911. Para-Ordnance 1911s were offered in a wide array of chamberings and became very popular guns to use as a basis for competition builds. Like Colt, Para-Ordnance offered a variety of sizes of their wide-gripped 1911s.

In the following years 1911s would serve as the platform for highly-customized handguns used for IPSC competition, personal protection, law enforcement, and military use. During this time, a man by the name of Bill Wilson, who was also an IPSC competitor, opened a gun shop in Berryville, Arkansas and began customizing 1911s. Today that gun shop is called Wilson Combat, and it is the largest custom firearms manufacturer in the world. A high end customized 1911 from Wilson Combat can cost as much as $5000 and the shop runs in a perpetual state of backorder with no end in sight.

A 10mm 1911 is Born, and Custom-Level Features Become Standard

As the design neared its 80th birthday, Colt introduced the Delta Elite, which was a full-size 1911 chambered for the Jeff Cooper-inspired 10mm Auto cartridge. The Delta Elite enjoyed decent popularity, especially after the demise of the Bren Ten. But with the introduction of the .40 S&W, or “10mm lite” as it is often called, sales declined, and the Delta Elite was discontinued. Ironically, today, with what looks like the near-death of the .40 S&W on the horizon, the Delta Elite is back, and 1911s chambered for the 10mm are more popular than ever. Some are even offered with a longer slide and a six-inch barrel.

As the new century approached, common 1911 customizations popularized by Bill Wilson and others began to bleed into standard offerings from a variety of manufacturers. Enhancements such as beavertail grip safeties, ambidextrous thumb safeties, extended slide locks, target and night sights, checkering on the front and back strap, improved trigger actions, and a host of other cosmetic alternations, became the norm on out-of-the-box 1911s from companies like Springfield Armory, Kimber, Ruger, Remington, and Smith & Wesson. Even in the midst of this plastic pistol revolution, the demand for enhanced 1911s is soaring.

Read Next: The 30 Coolest Handguns for Outdoorsmen

Now, more than a century after the gun’s introduction, the number of 1911s that have been produced by all manufacturers reaches into the realm of the uncountable. Though today’s best-selling polymer-framed pistols cost around half that of a quality 1911, the 1911 remains the pistol that all modern defensive handguns are compared to and judged by.

The basic design of the 1911 remained virtually unchanged until 2017 when Bill Wilson of Wilson Combat introduced the EDC X9, which incorporates an aluminum frame, double-stacked magazine, and did away with what many consider the gun’s biggest flaw: its troublesome grip safety. The EDC X9 is considered by many experts and professionals to be the ultimate expression of the 1911 platform.

In either its original, customized, or modernized state, the 1911 will forever be remembered as one of, if not the best, fighting pistol of all time. Its history is indelibly tethered to America. It has helped win wars, put down bag guys, and facilitated glory, fame, and even fortune. While it might not be as hip and cool as the more modern pistols that are so popular today, a 1911 will never feel like a toy in your hand. It will forever be, the Yankee Fist.