In nearly 60 years of writing about firearms, our rifles editor has returned, sold, traded, and given away scores of guns. But never these three 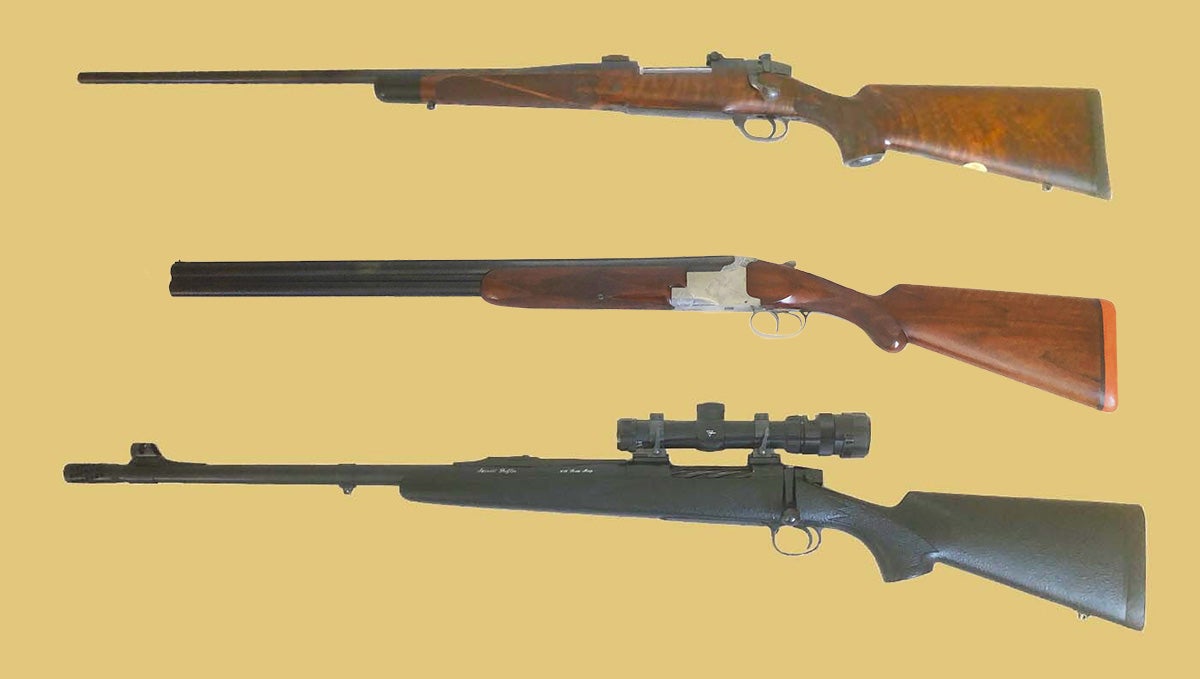 One of the cruel realities of writing about guns is that you can’t become too attached to any one of them. Your job is to get experience with as many different firearms as possible, and if you were to keep everything you really liked, you’d need a lot of money and a lot of secure storage space. And then you’d find that most of your treasures sat idle, year after year.

A little while back I sold my trap gun, which I thought I would never do. It was a Perazzi MX-3 that I got new in 1985. It was, at the time, Perazzi’s economy-priced model. I must have put a pallet load of shells through that gun.

But in 2013 I moved and stopped shooting trap, and the gun sat unused for nine years. Swallowing very hard, I sold it, and the last time I will ever see that MX-3 was as it sat in the dealer’s rack, still sleek and shiny, waiting to smash targets for someone else.

So, nothing is safe from being sold. But here are three I probably will never part with.

My uncle, whom I venerated, got the gun before World War II from a hunting friend I remember only as “Red.” According to Unc, Red didn’t have long to live and said “Eddie, you’re a lousy shot but a good guy. Take my gun. I want you to have it.”

So Unc did. Then World War II arrived, and he served in the Navy in the Pacific, and when he came home I never recall him touching a gun again. But he kept the Browning in memory of Red.

In 1972 his own time was growing short, so he sent me the Superposed, which by now was showing signs of neglect. I turned it over to Griffin & Howe, who refurbished it, and did a beautiful job, and probably made it anathema to Browning collectors because it’s no longer original. I shot it right after I got it and found that I couldn’t hit with the gun. It’s way too light for my tastes, and its full-choke barrel shoots extremely tight patterns. So that means it hasn’t been fired in half a century.

But sell it? Unthinkable. It’s Unc’s gun. Probably, before I go, I’ll give it to someone who will hang on to it and hopefully think kindly of me once in a while.

I got this one in 1971 in a New York City sporting goods store called Paragon, and it came with a very handsome dark fiddleback-walnut stock which, if I’d had half a brain, I would have kept. But I didn’t have half a brain. By my lights at the time, unless a rifle had a classic stock, you lived in Outer Darkness, so off to Griffin & Howe I went and decreed that they should build me a fancy gun. At that time, the great engraver Winston Churchill worked for G&H, and I asked that he cut a deer on the floorplate, and do some fancy checkering, at which he also excelled.

All custom rifles were grossly underpriced then, so if I lived on cheap, gas-producing vegetables and begged on street corners for six months or so, I could accumulate the price of a G&H rifle—a plain vanilla one. Except this one was not plain vanilla, and it was priced accordingly.

Normally, it took G&H six months to build a rifle, but four months went by and my phone rang. It was John Realmuto, G&H’s manager, to tell me that my rifle was waiting to be picked up. I ran up to the 7th floor of Abercrombie & Fitch where G&H dwelt, and beheld the Scarlett Johansen of rifles. And I could not pay for her. I told John. He saw the anguish on my face and said, “Oh hell, Little Friend, [that’s what he called me] take it. Pay when you can.” With a song in my heart, that’s what I did. If John’s boss had found out, it would have cost him his job. And of course, G&H got their money.

I ended up using the daylights out of that rifle. When it came back from Africa, it looked like it had been through a war. G&H fixed it up like new. Now, I’m pretty certain the barrel is burned out because it’s no longer the tack driver it once was, and I haven’t shot it in years. But I’ll never sell it because it connects me to John Realmuto, who was the kindest of men, and to whom I will always be grateful.

In April of 2005, I was at Kenny Jarrett’s shooting establishment in South Carolina, and whenever I went there, I checked his gun vault to see if there was anything with a bolt on the left side. There was. It was a .416 Remington Professional Hunter, built on a McMillan action with a nice, heavy 24-inch barrel, excellent iron sights, and a synthetic stock.

I took it to the rifle range, to the 50-yard target (which is more realistic for dangerous game than 100 yards), loaded three rounds, and cranked them off as fast as I could, which, it turned out, was very fast. Wayne Van Zwoll, who was watching, and who knows a thing or two about guns, said “That’s some rifle.” All three shots were in a group you could cover with a silver dollar.

It was some rifle. I went home, realized that without it life would be meaningless, and bought it from Kenny. This .416 is a combination of perfect balance, ideal weight, slick, infallible action, and target-grade trigger. Despite its considerable recoil, I’m able to shoot it faster and more accurately than any heavy rifle I’ve ever tried. The .416 has made, I think, three safaris after buffalo, has killed a number of them, and I’ve never had a close call, or anything resembling a close call. Down they go.

It’s as close to a perfect rifle as I’ve ever owned, or ever am going to own. I replaced the original front sight with a fiber-optic insert, and when the front sight hood lost a battle with a mopane tree, I installed a New England Custom Gun Service Banded Ramp Window Hood, which has big slots that let in lots of light for the fiber optic tube.

You do not sell such a rifle. Ever. For any reason. My buffalo-chasing days may be over, but the Pro Hunter stays.