Hunters can learn a thing or two from precision shooters, especially in the gear department 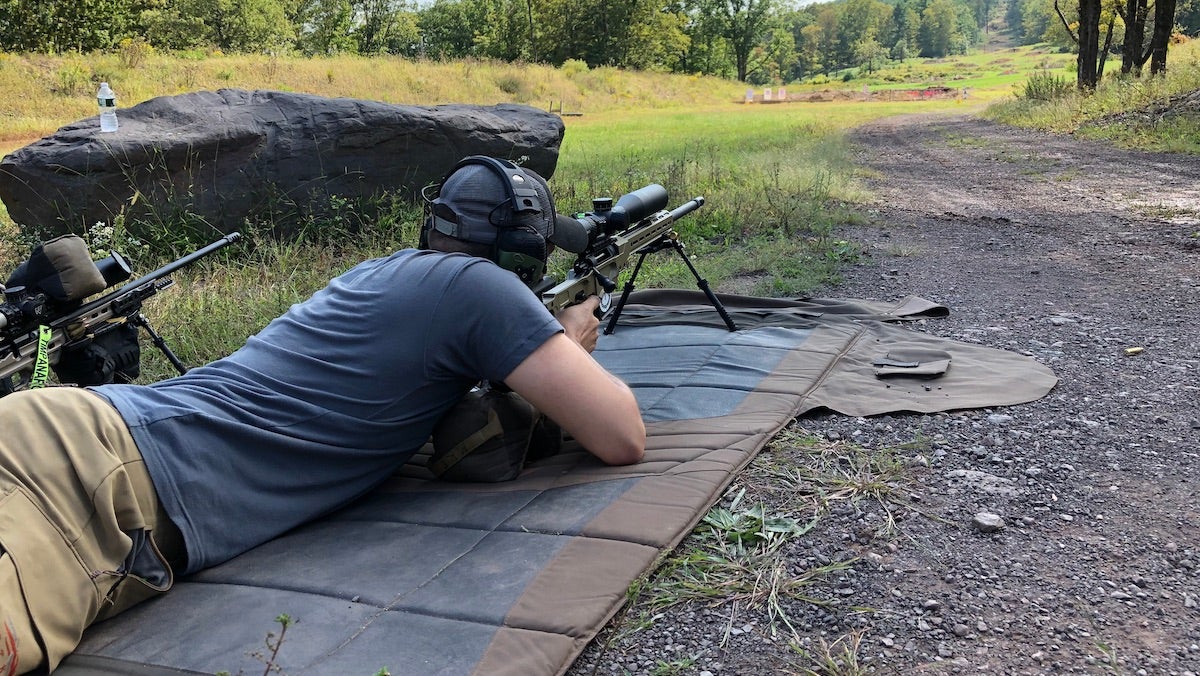 The author takes aim during a PRS match. Matthew Every
SHARE

Heavy rifles, sandbags, and giant scopes don’t sound like they’d be fun to hunt with because they aren’t. But, there is some competitive shooting gear that could really work for hunters. Recently, I dove down the long-range rabbit hole taking lessons and shooting matches like PRS and NRL Hunter. I wanted to see if there was anything hunters could learn from shooting at distance, and I wanted to see if the gear that precision rifle shooters use would translate to the field.

While I wouldn’t bring an 18-pound race gun with a 25-power scope into the woods, I did find a handful of useful things hunters should consider adding to their kits. And even if you draw the line at taking long shots at game, the following tools can help you make ethical kills at reasonable distances, no matter where you hunt.

In the competitive precision shooting world, it’s hard to get by without a rear bag. For those who haven’t shot with one before, these are small canvas sandbags you can rest a rifle on in various positions. In the prone, you tuck it under the buttstock of your rifle for a rock-solid rest. When shooting off of an obstacle, you can put it under the forend to keep a rifle from sliding around. I used one for the first time in a PRS match and thought it was nice, but didn’t think I’d ever bring it hunting because it was too heavy. Then I found out about Git Lite.

Git Lite is a fill material for shooting bags that acts like sand but is extremely lightweight (and way more stable than other plastic fill like airsoft BBs). When you rest a rifle on a bag filled with Git Lite, the bag will mold around the stock and stay put, giving you a stable platform to shoot off of. Armageddon Gear makes a pint-sized version of their well-known Gamechanger bag that’s so light I carry it on my binocular harness. I use it as a rest for my binoculars when glassing, a rifle rest when shooting, and a pillow when taking a nap.

Carbon-fiber tripods have made their way into hunting because they really are versatile tools. I started carrying one for glassing a few years ago, but never thought I’d shoot off of it until I took a long-range class and shot my first match. The problem with most quality tripods is they’re expensive—like as expensive as some hunting rifles. Cheap tripods won’t hit your gear budget as hard, but they wobble too much for taking shots at distance.

There is a good option out there though. Dan McNamee of Two Vets Sporting Goods offers top-quality carbon-fiber tripods to shooters for a lot less money than his competitors. I use the No Name tripod for shooting matches because it’s a little bigger and offers more support, and I take the Kit hunting. The Kit is compact and slim, yet sturdy. There are great attachments for locking a rifle to a tripod, but I like to keep things simple. I run mine with my shooting bag and something called a tac table. The shooting bag helps me steady my binoculars for glassing and lets me swap them out for a rifle quickly if I need to take a shot.

Long-range shooting gadgetry is great until you’re juggling a rangefinder, ballistic calculator, and binoculars every time you see an animal. I got turned on to rangefinding binoculars before shooting an NRL Hunter match. Most of the competitors were using them because the binoculars saved them time. NRL Hunter matches require you to find, range, and shoot targets in under four minutes. Rangefinding binos like the Sig Sauer KILO10K-ABS HDs allow you to do all of the above in a fraction of a second.

The KILO10Ks come pre-loaded with Applied Ballistics software and they can gather all of the atmospheric data necessary for ballistic calculations. After creating a profile for your rifle and ammo, all you need to do is push the button and the KILO10Ks will range your target and spit out a ballistic solution. I still carry a dope card as a backup, but I haven’t had any problems with the KILO10Ks yet.

Springfield loaned me a Waypoint to hunt with in 2020, and I liked it so much that I bought it. Simply put, the Waypoint feels like a custom rifle, but retails for a fraction of the cost. And being made mostly of carbon fiber, it easily comes in under the 12-pound mark for the NRL Hunter series, so I can compete with it all summer then take it into the field during the fall.

Last year, I shot the Waypoint at a marksmanship class in Colorado, and I was able to hit targets out to a mile. At over $2,000 for the carbon-fiber-barreled version, it isn’t cheap, but it’s probably the best deal out there for a custom-quality rifle. Also available with a stainless steel barrel, the Waypoint features an enlarged ejection port, a recoil lug that’s been machined into the receiver, toolless takedown of the bolt for service, EDM raceways, threaded barrel, five QD mounts, and a fluted bolt.

There are some first-focal-plane (FFP) target scopes that I wouldn’t hunt with, but the 3.6-18X44 Mark 5HD isn’t one of them. For starters, it’s compact, and about as long as a standard hunting scope. It does have a beefy 35mm tube, but the Mark 5HD is actually 20 ounces lighter than other scopes in its class. And, as far as the controls and interface go, the Mark 5HD is easy to use with a straightforward reticle that’s available in either MRAD or MOA.

I’ve sent over 1000 rounds downrange with my Mark 5HD and can say that it offers repeatable, consistent accuracy. When hunting, I limit myself to shots around 350 yards which is a chip shot for this scope. I’ve also found it easy to shoot targets while on low magnification at close range, which can be tricky with other FFP scopes. The Mark 5HD will not feel like your standard hunting scope and may take a little getting used to. But once you do there isn’t a lot you can’t do with it.

Throwing a rifle around on various barricades and obstacles during a match will separate gear into two categories: the stuff that works and the stuff that breaks. I asked a number of competitive shooters what bipod they trust to keep working and they all mentioned Atlas.

Atlas bipods are rugged with a grippy knurled texture on the legs for easy manipulation under stress. There are faster bipods to deploy and there are cheaper bipods out there, but in my opinion, the Atlas hits the sweet spot. I opted for a pretty simple version that doesn’t pan left-right and uses an adaptor plate from Area 419 to attach to an ARCA rail.

I’m a little on the fence about hunting with muzzle brakes. When working as a guide, I found the braked rifles my clients would bring to be loud and annoying. They do offer an advantage though, especially if you’re hunting alone and don’t have someone to help spot your shot. By reducing recoil, a brake lets you stay on target for a follow-up shot if necessary. In a competition, this is incredibly valuable. In the field, it can be too.

Personally, I think it’s up to you whether you want to hunt with a muzzle brake on your rifle or not. If you do, consider the Hellfire from Area 419. It’s easy to install with a self-timing thread design that allows you to swap out the brake for a suppressor. And because the gas ports are directed out the sides, it doesn’t kick dust back in your face when you’re lying in the prone position.

If you’ve ever attached a camera to a tripod, you know exactly what an ARCA rail is. Basically, it’s a dovetailed piece of metal that attaches directly to any tripod head. Some precision rifle makers today are machining forends into one long ARCA rail so the gun can be attached to accessories like tripods and bipods, and in the competition world, things like shooting bag plates. Area 419 also makes universal ARCA rails to mount to the forend of your rifle, giving you the ability to lock into the same accessories.

For the hunter, this is good for three reasons. Number one, ARCA rails are much more sturdy than sling swivels for attaching a bipod. Two, full-length ARCA rails allow you to move your bipod to different positions, letting you shoot steep angles from the prone position. Three, if you hunt with a tripod for glassing, you can clip your rifle into that tripod via the ARCA rail for a steady shooting platform.