When he was 14 years old, the author took a $40 gamble that his folks would let him get his first gun 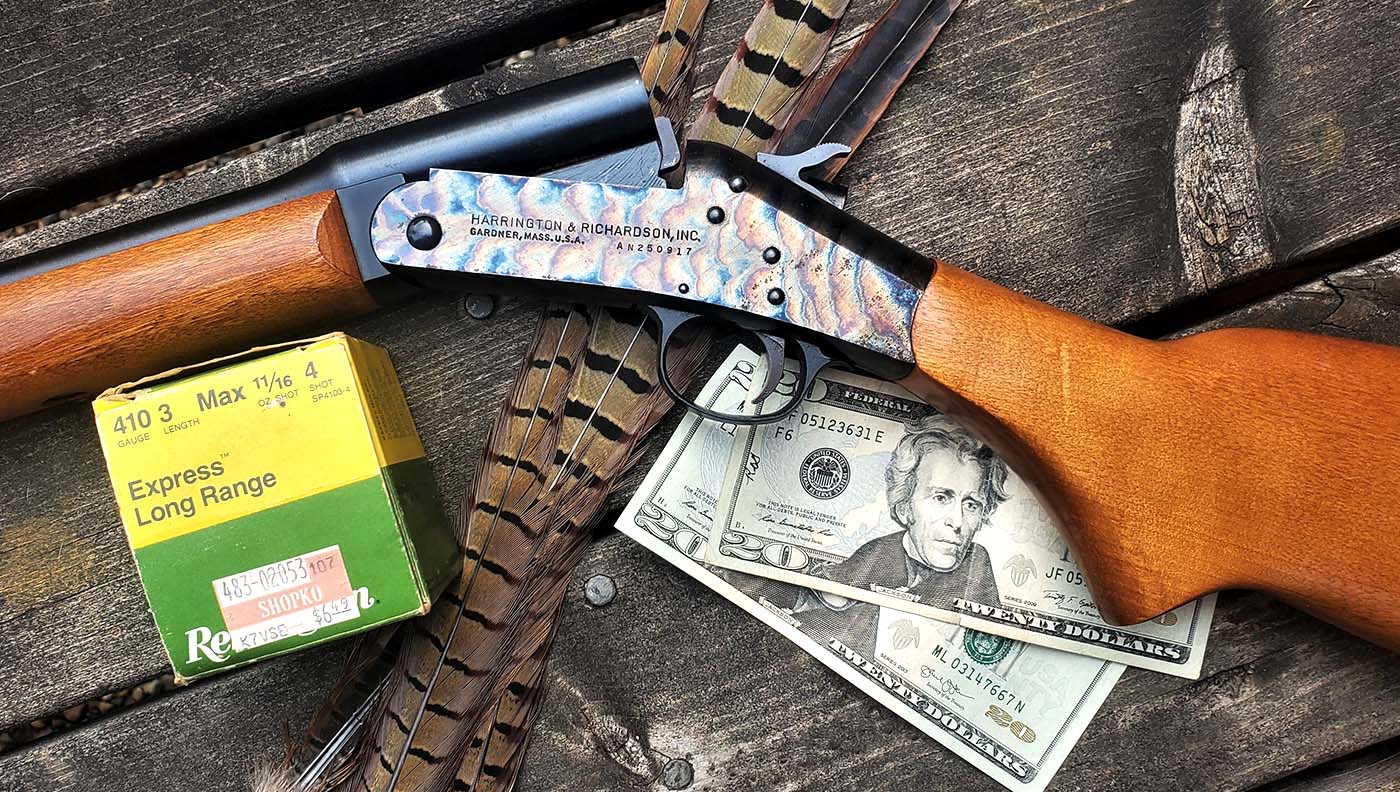 A Harrington & Richardson .410 single-shot exactly like the one the author bought as a teenager. Phil Bourjaily
SHARE

My older brother’s buddy Kelly Racine got a new 20-gauge Mossberg 500 for his birthday or for getting good grades or something. I don’t recall the occasion, but I was there when he opened the box. Inside was the shiniest, fanciest gun I’d ever seen. All the shotguns and rifles I’d encountered to that point were beaters—truck guns or barn guns or hand-me-downs. Or beginner models, like Kelly’s other shotgun, a .410 H&R Topper.

I was 14, just old enough to hunt legally in New York, and I’d just gotten my first hunting license. “What are you going to do with your .410?” I asked Kelly.

That was a lot of money, but I’d been driving a tractor and throwing bales of hay all summer for $1.50 an hour, and that comes to a lot more than $40. So much more that I’d taken to carrying it all in a wad in my right front pocket, in case the opportunity ever arose to dig it out and make a big deal of peeling off a few bills. And here was my chance.

I hid the gun in our attic, then pleaded with my older siblings and threatened my younger ones to keep their mouths shut. When Mom and Dad got home, I waited for the right moment and started in: “So, how would you guys feel about my getting a shotgun? You know, I’ve been very responsible this summer….”

There’d never been a gun in our house. Dad didn’t hunt and my older brothers only did occasionally with loaners. Mom didn’t like the idea one bit, but Dad said they’d talk it over. It must have taken a lot of talking, because the season opened before I got an answer.

In the meantime, I went hunting with my buddy Bill, with only my BB gun to carry—which I knew was kind of pathetic. One day, walking up on a stubble field, a rooster pheasant exploded at my feet, cackling. I shot uselessly with the BB gun, and then Bill’s Sears & Roebuck 12-gauge boomed, and the rooster folded in a cloud of parachuting feathers. When I got home, I sprinted up to the attic and replayed that scene, but with me dropping the bird with my real gun. As time went on, though, I became convinced that my folks were working up to telling me no. I wondered if Kelly would give me my money back. Or even take the gun.

Finally, my folks called me into the kitchen one afternoon and started running through the conditions. As they talked, I actually started to jump up and down a little. Then Mom said, “Okay, you can buy the gun,” and I bolted up to the attic, never giving it a second thought, and sprinted back down holding out the .410.

Dad started to complain but there was no stopping me. I begged to go hunting with Bill, right then, and Dad relented. Bill met me with his three-wheeler, and we buzzed over toward the stubble field. But before we even got close, we rounded a corner onto an old tractor path, and right in front of us stood a rooster pheasant, tail dragging in the short grass and gravel.

These were stocked birds and not too bright, so when I hopped off the machine and loaded my new gun, the rooster did nothing at first. But as I closed in, it started walking and then running and then…boom! I popped him in his green head and sent him tumbling. He was almost flying when I shot, so close that you might even say to anyone who asked later that he was flying. And he was magnificent—lying in a golden heap on the tractor path and then sticking half-way out of the game pouch of my vest and then paraded to my folks and brothers and sister.

People often say that a .410 makes a poor choice for a first gun, because a young hunter can’t hit anything with it. And there’s some truth to that. I don’t think I hit another critter with that little H&R my whole first year of hunting. But I hit that rooster pheasant. And almost 40 years later, I can still see it like it happened yesterday.