Hangovers, Fistfights, and Shark Bites… All Aboard the Party Boat!

Send dozens of rowdy anglers out to sea on a headboat, and you're in for a wild ride 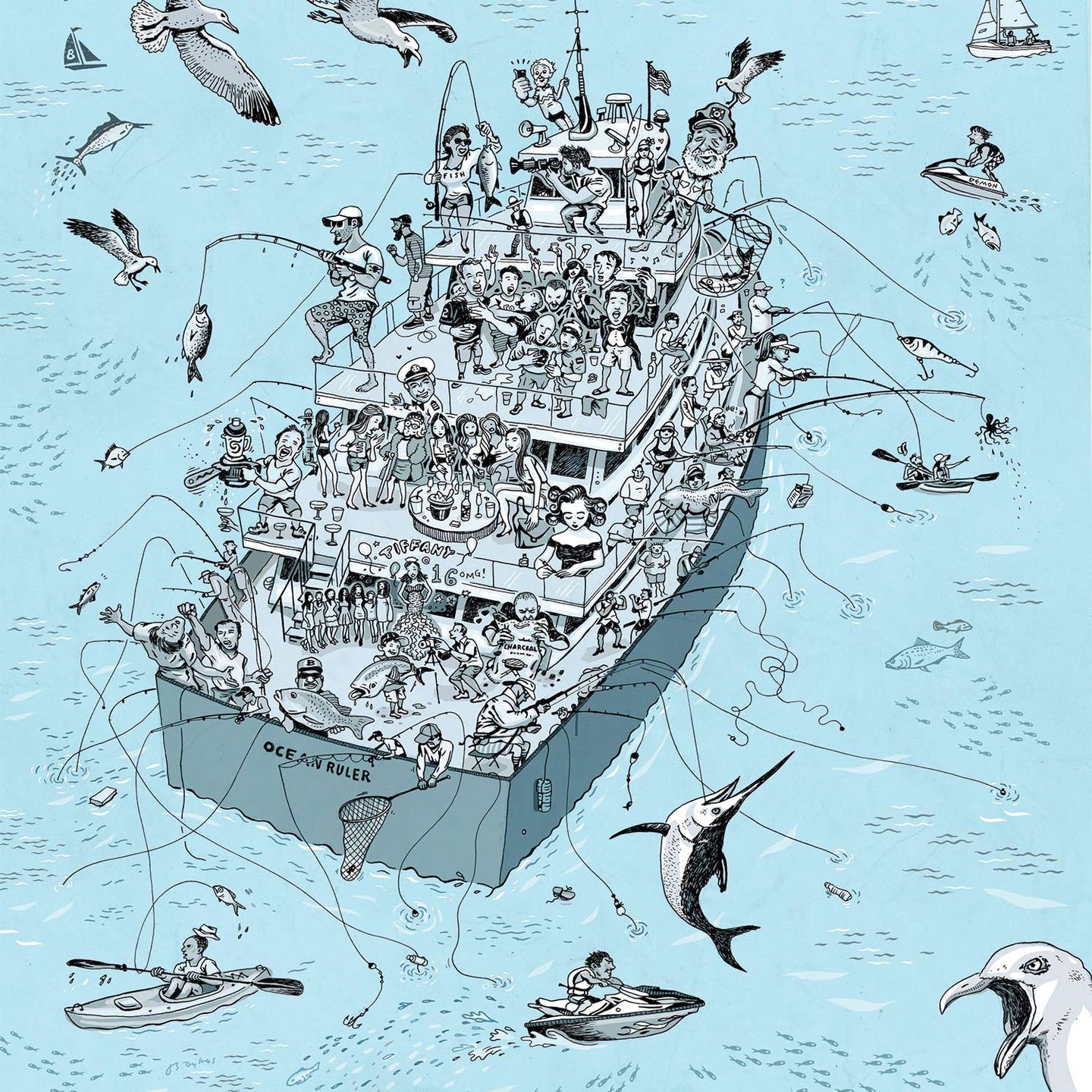 Sometimes, the hardest part of being a party-boat captain has nothing to do with catching fish. Sure, every skipper wants his clients to go home with a limit of fish or a wall hanger. But a handful of times per season, achieving those goals is overshadowed by the captain’s need to prevent the trip from spiraling into an utter s‑‑t show. Because along with the pressure of finding piles of fish, the job description of a headboat captain includes breaking up brawls, dealing with puking passengers, and keeping anglers sober enough to remain firmly planted on the deck. Of course, if the job were nothing more than babysitting sloshed and seasick clients, no one would want it. As you’re about to learn from four experienced captains, there’s a reason these guys go out day after day. And that’s because the best part of their job has everything to do with catching fish.

To be fair, headboats offer good, clean fun to anglers of all ages. Yes, unruliness happens on occasion, but it’s the exception, not the rule.

Capt. George Pfeiffer, Emerald Spirit: I have a group of anglers from the hills up in Alabama somewhere that come fishing with us every year. They’re super nice—but they’re true hillbillies. They do more drinking than fishing, so I always walk out on the deck and give them hell. “You no-fishing sons of a gun,” I’ll say. “Come on—wind the reel!” But these guys usually have the moonshine out already, so it doesn’t do any good.

One time when I went out to chastise them, one of the guys was standing up. The sea was slick-calm, and the boat wasn’t rocking at all—but he’d already had his fill. He wobbled a little, then sploosh! He went right over the rail. “Damn!” I yelled. “Man overboard!” But I also thought, Dang, he’s on something good.

Capt. Richie Collins, Capi­tol Princess: Being based in New York City, I take all sorts of people out: finance guys, real-estate brokers, construction workers, Sweet 16 parties. We have a 12-year-old kid—from a well-known New York family—who comes with his bodyguard. One of my favorite trips, though, was when I took out a bachelor and a bachelorette party on the same boat—two totally different groups, a complete coincidence. The gals had an especially fun time. Probably because they outfished the guys 3-to-1.

No matter how many fish are caught or how hard the crew works to ensure everyone has a good time, there’s always that one angler who will never be satisfied.

Capt. Randy Boggs, Reel Surprise: One day, two guys got on the boat and wanted to fish from the transom, but my deckhand had already arranged a family of 10 along the back of the boat. The guys started complaining: “They shouldn’t get special consideration just because they’re a bigger group.” By the time we got a mile from shore, I’d heard all the griping I could stand. I turned the boat around, took them back to the dock, and sent them to the office for a refund. When I pulled away, everyone on board gave me a standing ovation.

Collins: The fish had lockjaw. By 2:15 p.m., we’d only caught a handful of sea bass and porgies, so rather than returning to the dock by 3:30 as planned, I walked around the boat and asked everyone if it would be OK if we stayed out a few hours longer. The tide was about to change, I told them, and when it did, the fish might start biting.

Everyone said, “Great, captain! Fine, captain!” Everyone, it turns out, except for one lady. I don’t know whether she was in the restroom or up on the second deck, but somehow she missed the announcement. I remember she had an English accent and seemed pretty well-to-do. Anyway, just as I’d hoped, the action turned on. Bam. Everyone was hooking up, and the quality of the fish was great.

Two hours later, we were on our way in, and I couldn’t have been happier. That’s when the Englishwoman, who seemed to have been enjoying herself, asked what time we’d be in. “We’re still an hour and 20 minutes out,” I said. “So probably 5:30 or 5:45.”

She went from smiling to looking daggers. “Are you kidding?”

“I’m sorry,” I told her. “I walked around the boat and asked everybody. I took a poll.”

I tried to apologize again, but she just kept yelling at me.

I ended up apologizing again and reimbursed her for the trip. But she was still red-hot. She’s the only person who has ever complained to me about staying out longer to fish.

On a crowded boat when the seas get rough, it’s only a matter of time before seasickness strikes. Suffice it to say, some power through the pukes better than others.

Pfeiffer: My rule is, if you start puking, keep your ass outside. Several years ago, I took out a group on an overnighter, and the seas were so rough, I had to tie the boat off on an oil rig for the night. After the boat was secure, I reminded everyone of the rule about staying up top—and not going down in the berth—if they started to feel sick.

A while later, before going to bed, I was out on the back of the boat fishing when a bag of charcoal went floating by. I figured it was trash, so I didn’t worry much about it. The next morning, I went to fire up the grill to cook breakfast. I go to light the thing, then called to one of the guys for more charcoal. Surprise, surprise—there was no more charcoal. During the night, one of the anglers had gotten sick in the berth and grabbed the closest thing to him—which happened to be our only bag of charcoal—and puked in it, then threw it overboard.

I’d brought all sorts of good food for the trip—but without charcoal, I couldn’t cook any of it. For the rest of the trip, we basically had nothing to eat but sliced cheese.

Blame it on spending hours and hours in the sun or tangled lines or being overserved, but it’s not uncommon for things to get heated between anglers.

Capt. James Smith, California Dawn: When I was just starting out, I’d let people party more than I should have. To give you an idea, I had a blender that I fastened to a chain saw and used to mix margaritas for customers all day. Anyway, one day we were sturgeon fishing with about 18 people, including this one woman from Texas. The entire day she kept fighting with a guy who kept using the women’s restroom—probably because it was cleaner than the men’s. It made her furious. She yelled at him, and the more she drank, the angrier she got.

Around 2:45 p.m., people were partying a little too hard, so I decided to head in early. Then I heard a commotion. The woman had caught the guy using the lady’s room again, and this time she’d had enough. She pulled a pistol out of her purse and pointed it at him. He was shocked, just standing there as she yelled. I quickly intervened. “Give me that gun,” I said, “or I’m calling the Coast Guard.” She was mad, but she came to her senses and handed it over. By the time we got back to the dock, they’d both cooled down, and I let them go their separate ways.

Since then, I’ve turned the business into one of the most professional and successful party boats in San Francisco Bay. I’ve had some rowdy customers since those days—but none of them has drawn a gun. Thank God.

Boggs: One time, when we got back to the dock, a guy started arguing with another dude about money they’d put into a biggest-fish pool. The first guy was pretty hammered, and he started swinging. “There’s a fight!” someone screamed. I came out of the boat and told the drunk guy to quit. Then he lunged at someone else. I was going to grab him, but I’d been working on the rudder and happened to have a crescent wrench in my hand. So when he tried to swing a punch, I gave him a little love tap on the forehead and knocked him to his knees. Around the marina, my status as a badass rose by about 80 percent after that.

So, why do these captains put up with all of the belligerence and blown chunks? Because sometimes everything comes together and a deserving client lands the fish of a lifetime.

Collins: Last season, we had a regular client—an older gentleman—catch a 10-plus-pound fluke. We’d taught him how to fish over a few different trips, but to the best of my knowledge, he’d never caught anything serious before. When that fluke hit, he thought he’d hooked the bottom. He won the big-fish pool that day, needless to say.

Smith: A couple of years ago, we took out an all-­veterans group, including a woman who’d lost an arm and most of a leg while serving in Iraq. She caught a really big king salmon with us. It meant a lot to her. We finished the day with a full limit of kings—54 in all. I can’t think of a group of people who deserved it more.

Pfeiffer: We run on a tight schedule, but invariably, after chumming for two hours, a shark will show up five minutes before we need to leave—and a kid will hook into it. You’re guaranteed to be late, but what can you do? Be the grumpy captain who cuts the line? No way. Because not only does the kid get excited, but also the entire boat. And once you get back to the dock, I don’t care if you catch a limit of world-record red snapper, all everyone wants to look at is the shark. This happened recently on the boat with a family from Minnesota. At first, the 10-year-old son didn’t know what he’d hooked, but my deckhand and I did, so we played it up as we helped him reel. “Here it comes!” we said. “It’s a man-eater!” The kid was the hero of the trip.