Are these guys morons, or what? Actually, I’m going with “or what?” 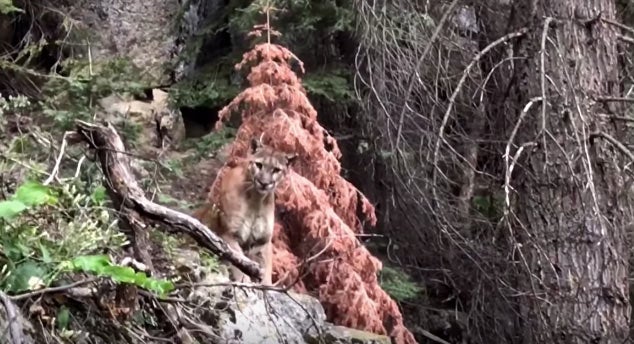 This video has been around for a while, but it was new to me. Two guys backpacking the High Sierra Trail in California’s Sequoia National Park are filming themselves when a mountain lion appears on the trail not 20 yards ahead of them. The cat casually pads down the trail ahead of them and disappears as it rounds a bend.

This is the crucial moment, right? What would you do? The smart thing is to turn around and go the other way. But it can be hard to be smart when something like this occurs. Your curiosity is running high. As for me, being a hunter who has chased mountain lions with a professional, I might figure that I would know enough to handle myself around a beast that ought to be more scared of me than the other way around. So—even as I might cue the creepy music in the background of my personal movie—I admit that might do just as these guys did, which was to advance slowly.

Notice how well the cat has chosen its ambush point. The curve tightens to where you can only see a few feet ahead. The guys round the corner, see nothing, then have the suddenly predictable oh-sh*t moment when they look up to see the cat calmly appraising them 15 feet above their heads.

“What are we supposed to do?” whispers one.

“I don’t know,” the other says blankly. “I don’t think you’re supposed to run or go away from it.”

So they stand frozen. One mentions “the bear thing,” possibly referencing pepper spray. There’s some mention of a whistle. It’s not clear. One says “Back up,” and they do. At 1:48, there’s what sounds like an involuntary moan of pure fear. They back up. The whole clip lasts exactly 2 minutes.

It’s tempting to call these guys morons or even to say that if you don’t have sense enough to go the other way once you’ve seen a mountain lion, you deserve whatever you get. I think that’s too easy. And, if your comment is read by a non-hunter, it’s just more ammo in painting hunters as arrogant and callous. Which sure doesn’t help the cause.

So what’s the lesson? Certainly, it is to learn as much as you can about how to face possible dangers before you head into the backcountry. But it’s a lot easier to say you should always go the other way than it is to actually do it. In 99 percent of cases, the lion probably would have vacated the area as quickly as it could. Bearing in mind that it’s illegal to take firearms into a National Park, what would you have done? And be honest.