His Majesty, the King

A fascinating look at one of the world’s deadliest snakes, the king cobra 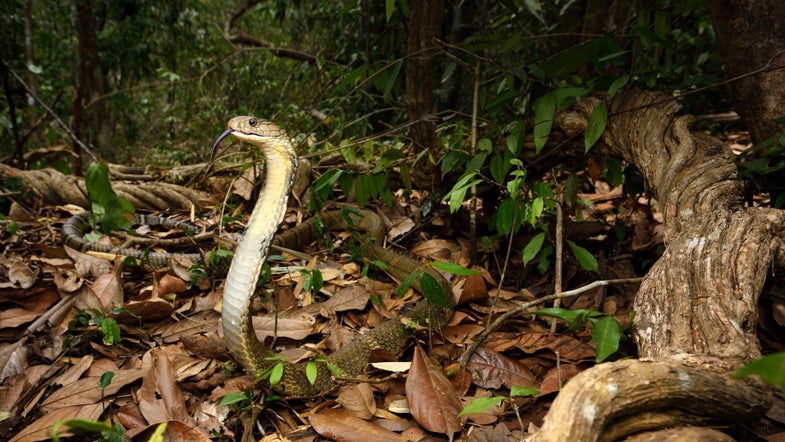 A king cobra in its natural habitat. By Tontan Travel (tontantravel.com)
SHARE

A few posts back I mentioned the late naturalist, author, and television personality Roger Caras, whom I knew a little bit and liked despite our bitter differences over hunting. He was a prolific writer, and of his many books there are two that are very much worth your while. One is Dangerous to Man (1964) which is a scholarly, rather than a sensational, look at all the hazardous critters on the planet and how much of a threat they actually are. The other is The Monarch of Deadman Bay (1969), the fictionalized life story of an Alaskan brown bear from birth to death, at the hands of, naturally, a hunter.

The reason for all this is that O. Garcia asked about my policy on snakes, and in an appendix to Dangerous to Man is a fascinating little piece of herpetological knowledge that I read more than 50 years ago and have never forgotten. In researching the book, Caras asked five snake experts to name the deadliest serpents on the planet, “the snakes that you would least like to be trapped in a phone booth with.” There are something like 200 species of dangerous snakes (out of a total of 2,500), and the only one that made all five lists was the king cobra.

The king is not only a good bet for most lethal snake, it’s also among the most interesting. In case you’re not up on your king cobra knowledge, here are some facts that will be useful in case you run into one.

Although the King is related to the African cobras, it’s not a “true” cobra. It occupies its own genus.

It’s the longest venomous snake. The average length is about 14 feet, but the biggest ones grow to 18½ feet and can weigh as much as 30 pounds.

The king’s venom is neurotoxic, and is not especially virulent as venoms go. However, every one of these awful beasts packs enough of it to literally kill an elephant (It’s happened.) and if they choose to give you the whole load, you have almost no chance of survival unless you get immediate treatment.

Instead of a traditional warning hiss, the king emits a low-pitched sound which is half hiss, half growl. This is a sign for you to go somewhere else, or wet yourself, or both.

In the wild, king cobras can live for 20 years, and if you kill one in India, you will go to prison for six of those years.

The king makes its living killing and eating other snakes, and is not above downing the occasional rodent. This presents us with one of life’s mysteries: Why is a snake whose prey is other snakes equipped with enough venom to kill a 10,000-pound elephant?

Despite its armament, the king cobra kills comparatively few people. It’s a forest dweller, and doesn’t go rooting amongst humans, as does the krait. (A krait will get in bed with you, and when you roll on it, the little fellow will give you a bite to show you how it feels. Since its bite is painless, you will probably not wake up. Ever.)

There’s some disagreement about the aggressiveness of king cobras, but there is consensus on two things: Unlike most snakes, they will neither retreat nor back down when confronted by a human. And, they seem to show a high degree of intelligence, and are inclined to think things over before attacking.

Caras reprints a passage from his correspondence with a Major C.H. Simpson, an old India hand who was hunting sambar stag and had taken up a post in a water course waiting for one to show up when he heard a rustling sound and, to his horror, saw a huge king cobra headed his way, poking its snout in piles of leaves, hoping to stir up a rat snake.

Simpson froze in place but lifted his rifle to the ready position just in case. The snake saw him, raised its head off the ground, and seemed to reflect on the situation. Then it continued on its rat-snake mission, passing within a few feet of him. Seconds later, it rousted dinner, and despite the rat snake’s lead, the King got its prey so quickly Simpson realized that if it had attacked him, he would have had no chance to shoot.

My own nominee for phone-booth snake (assuming you could even find a phone booth today) is the Gaboon viper. Here is a snake of superlatives. While not the longest venomous serpent, it’s the heaviest, and can reach 40 pounds. It has one of the fastest strikes, and the longest fangs—over 2 inches—of any snake. Most important, it produces more venom than anything else, more even than the king cobra. Its venom glands are described as “colossal,” and it’s estimated that 1/35th of the venom in a typical bite is enough to kill a 150-pound man. The venom is cytotoxic (cell-destroying) and its effects are appalling.

Although extremely mild mannered, the Gaboon viper takes envenomation seriously, and hangs on after striking until it has delivered its whole load. The bite is described as the most agonizing of any snake, although how this could be measured I have no idea.

I’ve only seen one Gaboon viper in Africa, and that was at a snake exhibit in Victoria Falls, Zimbabwe. The awful beast was in a glass-fronted cage, on a bed of leaves, and blended in so perfectly that I couldn’t see him from a foot away until he shifted slightly and came into focus. That was the scariest part of all.