Hook Shots: Susquehanna Smallie Fly Marathon by FieldandStream What’s the secret to catching a ton of smallmouths on fly? Easy.... 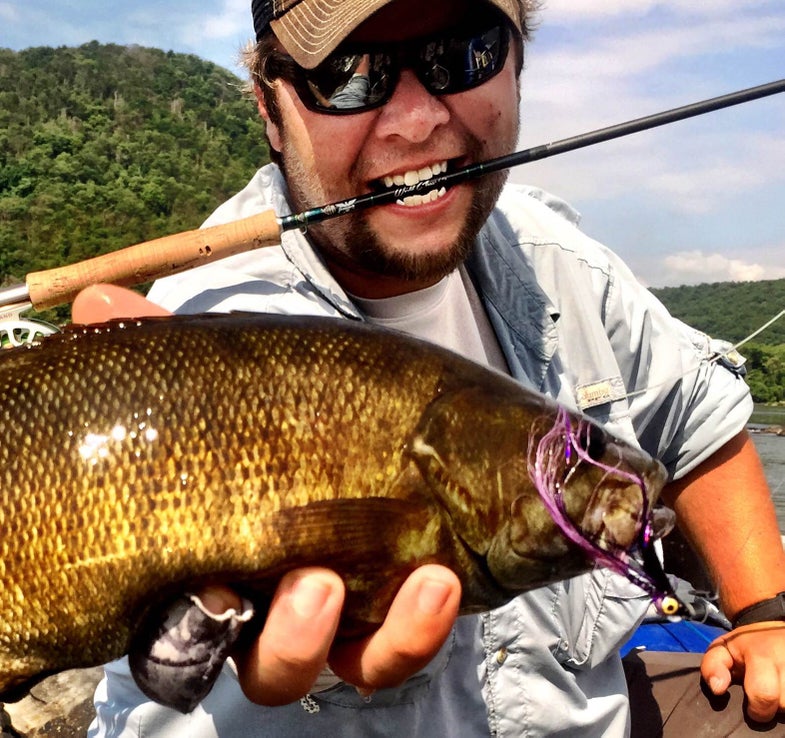 What’s the secret to catching a ton of smallmouths on fly? Easy. Get your fly in front of a whole lot of smallmouths. That sounds like a no-brainer, but anyone that chases bronze with the long rod understand that even in great water, you’ll rarely do as much damage on fly as you will with conventional tackle. That’s why the Susquehanna River in Pennsylvania is so special; there are so many bass per mile, the idea of having a smallie at least see your fly on every cast isn’t too far fetched. When the water’s low in summer, the location of these fish becomes most predictable, which is why the “Hook Shots” crew toughed out a grueling 15-hour float in sweltering heat. They might have gotten sun burned, but a little peeling is worth it for smallmouth fly action of this caliber.

The Deal: In the bass world, the Susquehanna is famous. Sure, it’s had its share of conservation issues over the years, but rest assured, any hype you hear about it no longer kicking out numbers is purely fictional. Thanks to a widely varied make-up—from shale ledges, to islands, to flats, to vast eel grass banks—the astronomical number of bass living in it remains staggering. And there are so many crayfish and so much baitfish in the “Susky,” these fish are fat and happy. Even though the Susquehanna near Harrisburg, PA, is nearly a mile wide in some spots, it’s a very shallow river. While this can make rowing it in summer a game of constant zig-zagging, the endless pool drops, schutes, seams, and eddies create literally too many targets for a flycaster to hit them all. It’s pure Candyland, and if you think a smallie is holding a particular spots, you’re most likely right. Send in a Clouser or Popper and hang on.

When To Go: The Susquehanna can fish well almost all year…at least for conventional anglers. If fly is your game, late June through early October is when you want to show up. During these months, the river is low, exposing all those juicy targets. Because you’re not dealing with water much deeper than 5 feet, you can also avoid having to chuck heavy sink-tip lines all day, getting away with full floaters or clear intermediate tips. If it’s trophy bass you seek, a fall visit typically kicks out fewer but bigger fish for the fly guy. If you just want piles of fish with some occasional studs mixed in, show up in summer with a cooler of cold brew, a pair of shorts, and some old tennis shoes.

What To Bring: Seven-weight fly rods are perfect for a summer Susky attack. They have the punch to deliver the long casts that are often necessary, as well as the backbone to easily turn over light sink tips and bulky foam poppers. Any topwater fly the pops, spits, gurglers, or slides will get trashed. If the sun forces you to go subsurface during midday, you can’t go wrong with a Clouser Minnow. After all, Bob Clouser did invent this staple pattern on the Susquehanna. While fly style selection isn’t too complex, do make sure you bring a wide variety of colors and sizes (size 2 to size 6). This is especially important with Clousers and Deceivers, as the fish often change their response to dark versus light flies throughout the day, or even from run to run.

Book A Trip: If you’re looking for a guide that not only knows how to navigate every run, riffle, and pool in the Harrisburg area, but can also get you dialed into the kind of bass bites that make your arms ache, look no further than our good buddy Nick Raftas. Nick has been fishing the Susky his entire life, and has an exceptional working knowledge of its hatches, as well as the patterns that get bronze on the line in every summer condition. If you need a place to crash in the Harrisburg area, you’ll find plenty of options. If you want one that we can confirm is safe, clean, and reasonably priced, check out the Country Inn & Suites.