How I Tried, and Failed, to Teach My Daughter About Fishing 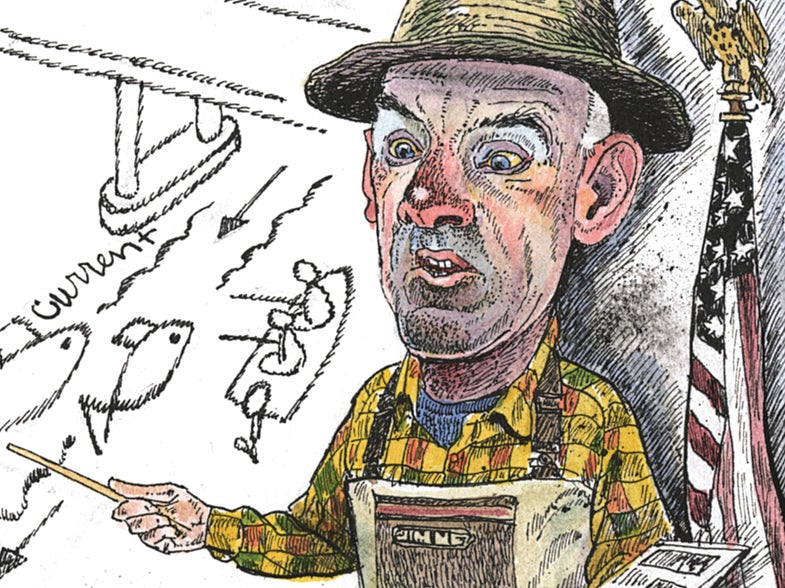 Some bleak February mornings it’s all a guy can do to rise, eat an 18-ounce bag of white corn Tostitos, and go back to bed. Then one morning you wake to a sun that makes you feel like lost luggage that got sent to Jamaica. A sun that warms to the bones. A few hours of sun won’t stir up any fish. They’re too smart for that. But something pulls you anyway, if only the ritual. If only to pay your respects to the river.

Emma wouldn’t like it, but she needed a shot of the natural world herself. For too long she had tarried in YouTube’s slanted universe of banana-peeling cats and hamster steeplechases. I wanted to remind her of an even better large-format website: the outdoors. I knew it would be a tough sell, especially coming from the Homework Monster, Mr. Eat-Your-Peas. So I offered a choice: Clean her room—​which I defined as “that state in which a stranger could tell whether the floor was carpeted or not”—​or go fishing with her old man.

“Blackmail is a form of extortion through intimidation,” I explained. “This is more like ‘the lesser of two evils.’”

“Oh,” she said, surveying a room that made the Middle East look tidy. “O.K. But I am not touching worms.”

It was balmy when we arrived, nearly 60 degrees, the river running high and cold. I headed for a hole that sometimes yielded an early crappie. I tied on marabou jigs tipped with worm and clipped on bobbers 3 feet above. Emma pointed to a painted turtle sunning itself just as it plopped back into the water. “Good eye, honey,” I said. We cast out. Nothing. We cast again. And again.

I complimented Emma on her casting. But she was reeling in too fast. I tried to show her how to pop the rig with a low rod tip and reel more slowly. Coming from anyone else—a hated teacher, the hairy-handed orthodontist, or ­Satan—​the suggestion might have merited consideration. Instead, she shot me a brief you’re-kidding-right? look and kept reeling too fast. I backed off. Her good humor, welcome as the February sun, was just as likely to dive behind a cloud.

I’m not the greatest parent, but I knew some positive reinforcement was in order. “It’s fun being out here with you, monkaloo,” I said. “I’m really glad you came.” She didn’t say anything—I’d known she wouldn’t—but I wish I had a recording of the assenting noises she made. Brief but wondrous, like birdsong.

After 10 minutes, Emma said, “Daddy, is it O.K. if I don’t fish?” I’d seen this coming. “Sure, honey,” I said, even though it meant we’d be leaving in five minutes. I began not catching fish more quickly.

After 20 minutes, I went looking. Em was kneeling on a sliver of beach nearby, working on an arrangement of small sticks, stones, and grass. Similar arrangements lay on other rocks. Each was a little stone altar protected by a twig tepee. A sheaf of bright green oniongrass, bound with a single strand of some wheat-colored grass, lay atop each altar. They were astonishing things, a child’s unaffected and unself-­conscious response to the natural world, springing from a place that I, like all adults, had paved over long ago. Implicit in these small shrines was the understanding that everything here—water, rock, turtles, plants—was alive, powerful, holy.

“Monk,” I said, “these are…amazing. They’re beautiful. What do you call them?” She shrugged, adding a final twig to one of the tepees. “Just things I did,” she murmured.

We had switched places. I was suddenly the one who needed to see. I forgot about fishing. I tried to photograph the scene in my mind. I wanted to hold on to it. Emma is changing quickly. By the time you read this, she will be 13. She may no longer make temples at the water’s edge.

“O.K.,” she said. She placed a last stone. “Let’s go.” Emma’s intuitive nature extends to knowing when she has power over her father. That night, she insisted on dinner in front of the TV, on which we watched Hannah Montana, her touchstone teenage sitcom for the last four years. I hate this show, with its canned laughter and dumb jokes. I watched anyway. It was my own small offering to the mystery of my child.

Editor’s Note: This classic “Sportsman’s Life” column first ran in the March 2013 issue of the magazine. This is the first time it has appeared online.