How a Mississippi Woman Killed a State-Record, 13-Foot Alligator 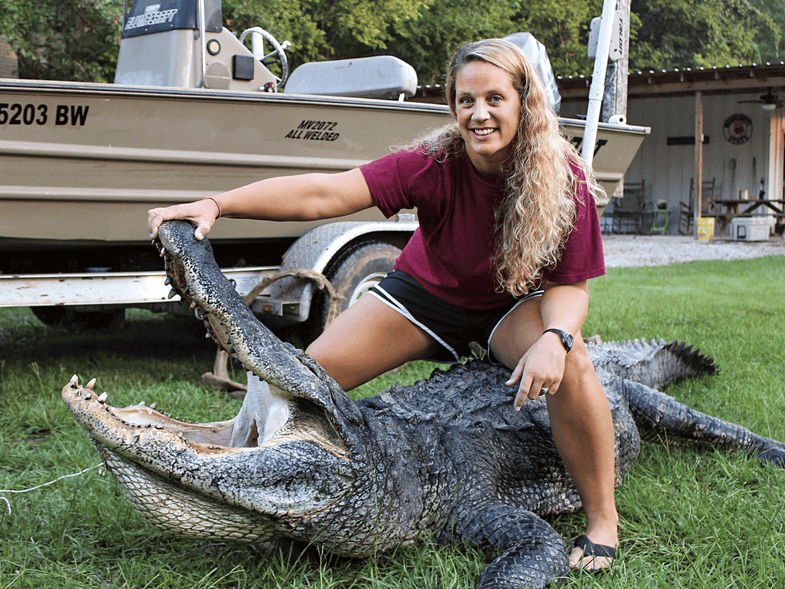 ○ It was dark, but right when I spotted the alligator, I knew it was the biggest one I’d seen in my three years of hunting them. My husband and four friends were with me on the boat, and as we inched within casting range, the gator dove under and vanished. Our group had already killed a big gator that season, but I had a tag I really wanted to fill, so we didn’t give up looking for it. Thirty minutes later, it resurfaced—right in front of us. My husband snagged it, and we got a few more lines on it before it took off. It ran us from bank to bank, pulling hard. Every time it neared the river’s edge, I feared it might break us off in the brush.

After 45 minutes, it tired out and swam closer to the riverbank, which gave us our first good look. And it was absolutely massive. We eased up and slipped a snare over its head—but some twigs prevented us from tightening it. The gator wriggled free and thrashed through the bushes, snapping off our lines. I was devastated. But 20 minutes later, we spotted it off the back of the boat. One of the guys made a quick cast and hooked in, then we got a couple more lines on it. Once I’d hooked up, every muscle in my body worked to hold on to the beast. Three of us struggled to hoist it to the surface, but it dove deep each time we got it near the boat. It was taking all the strength I had.

Finally, two hours after the fight began, we wrangled the gator alongside the boat and dispatched it. I was physically and mentally exhausted and couldn’t believe I’d ended the season with a gator so big. Back at the dock, a game warden took one look at it and then pulled out his tape measure. That’s when I knew I might have a record. —As told to Hilary Ribons