Reader Question: How Tightly Should You Hold a Gun?

Our shooting expert discusses proper grip and stance at the range 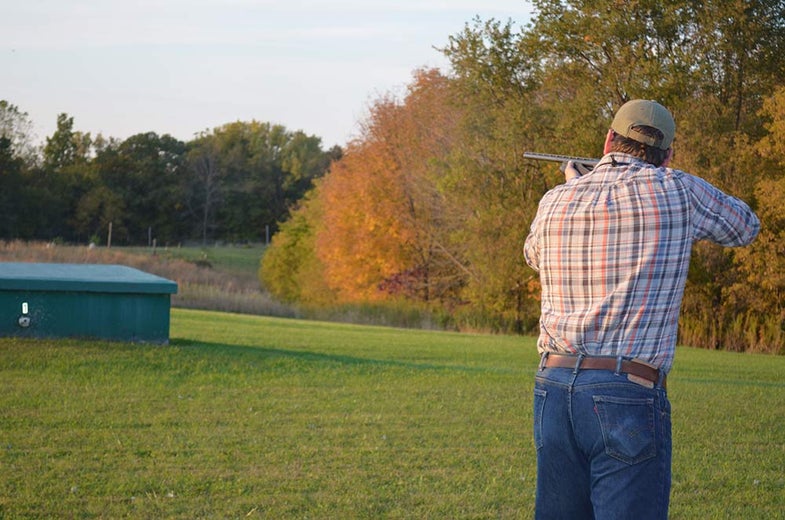 Instead of worrying about your stance, spend more time at the range to improve your mental game—and your shooting. Wiki Commons
SHARE

A couple weeks back I was watching as one of our better trap shooters gave a few instructions to a newcomer. He told the fella to bury the butt into his shoulder TIGHT. This has exactly the opposite of a good effect for me. If I’m clinching the gun too tightly, I tend to be lurchy getting on target. I don’t float to it. What’s your take on this?

The guy also stands with legs locked rigid as an A-frame. Definitely does NOT work well for me (though I wish I could shoot as well as he does!). As a right-handed shooter, I stand facing the target with left leg at about 11:00 and right leg at maybe 3:30 or so, both knees slightly bent and weight on inside of my feet like I’m downhill skiing. This sets me up to swing on the clay with my upper body rather than arms. Moving my shoulder and chest to the target means I’m less likely to pull my head away from the gun especially on hard right crossers.

Trap shooters vary in stance—from what we would recognize as a fairly normal wingshooting stance, to a rigid, more rifle-shooter-like sideways setups like the one you describe. Trap shooters want consistency. For some, that means locking down on the gun as tightly as they can, which is why you see some trap shooters smearing Vaseline on their cheek to prevent the gun from rubbing it raw. I once heard a trap shooter complain (shocker) that he picked up a gun with left-handed cast by mistake, and because the stock was angled into his face it nearly loosened his teeth. Your head has to be seriously squished down on the comb for that to happen. I shoot right-hand cast guns all the time and can’t feel any difference in recoil because I don’t cheek the stock that tightly.

You can assume all kinds of stances in trap and still shoot very good scores, because the angles are gentle and the shots are easy. It’s as much a test of consistency, mental endurance and focus as it is of shooting skill. That doesn’t mean trap isn’t good wingshooting practice. It sharpens eye-hand coordination and gun pointing, and it teaches you to keep your head on the stock, no matter how tightly or loosely you hold the gun. There’s value, too, in learning to expect to make every shot you take, which is the mentality of a good trap shooter. ATA hall-of-famer Kay Ohye told me once: “If you and I go quail hunting and we each shoot four birds with six shots, you’ll think you had a pretty good day. I’ll think, I missed two shots.”

If your goal is to hit more birds in the fall while still having a good time and shooting decent scores, hold the gun the way you hold it, which, for wingshooters means with the butt fully seated but not hugged tight to the body, and held about as tightly as you’d hold a helium balloon to keep it from floating away. Like you, I believe holding a gun any tighter binds you up. Don’t change your stance. Improve you scores by shooting a lot and working on your mental game.