How To Attack A Winter River On Foot

When I was younger, Black Friday and Cyber Monday were always about fishing the Finger Lakes in New York. It... 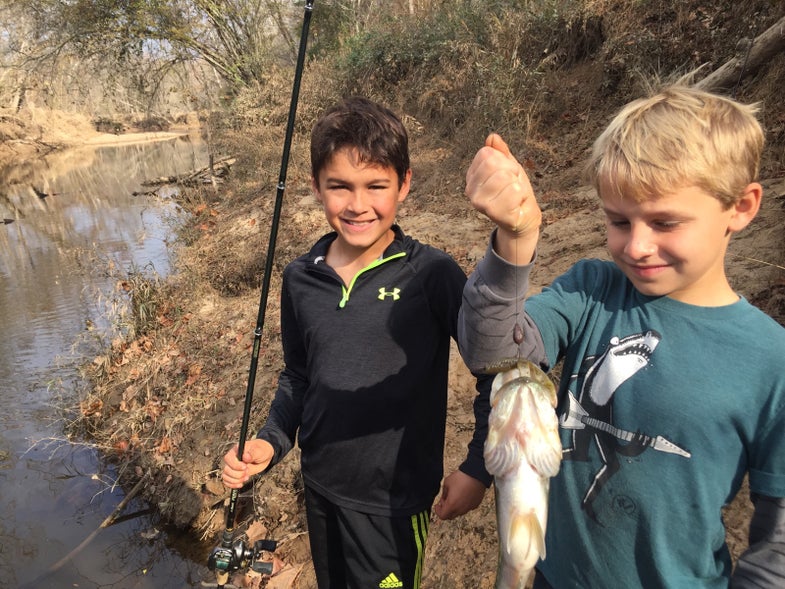 The author's son and a friend show off their catch.. Dave Wolak
SHARE

When I was younger, Black Friday and Cyber Monday were always about fishing the Finger Lakes in New York. It was often very cold, and the bass were deep, but the rewards were substantial considering the size of smallmouth that ended up in the boat. These days, I usually spend part of T-Day weekend on a 4-wheeler (with a few fishing rods strapped down) with my son and some friends exploring long public stretches of some local North Carolina rivers. It’s sensory overload for a couple of ten year olds—mud, fish, and going fast. Even though this feels a bit more like playing around than serious fishing to me, there are several similarities in fishing these rivers while horsing around with the kids, and going full-throttle on the Finger Lakes.

The biggest similarity between both styles of fishing is that there is a lot of dead water this time of the year, and a lot of that has to do with depth. The Finger Lakes are very clear, so I used to use old aerial photos or Google Earth to hunt for abrupt drop-offs. Sure, a fishfinder can spot these, but when it’s really cold you’ll want to limit the boat driving and just get to the fishing. In rivers, the bass need similar deep holes and very little current as they set up for winter, but I find them visually by simply standing high on the riverbank. When I spot a hole that I feel has some depth, I’ll look for key cover with slack water around it. For example, a big log on a deep outside bend may look deep enough, but too much current may be too much of a daily fight for a lethargic winter bass. On warmer weather days in both scenarios, you’ll sometimes be able to catch a glimpse of a fish cruising shallower waters close to deeper areas, like on the edge of a drop-off, or around a key piece of cover. Search baits, like small swimbaits or jerkbaits, often call these fish up to tell you what areas are harboring the rest of the school. The bass may not be committal to these baits, but these bass can be picked off later with slower finesse baits like a dropshot or a jig.

Falling in the frigid water in either scenario is not an option. That’s part of the reason I don’t like wading in the rivers, but I do bring a dry set of clothes. The deep undercut banks, murky water, and muck bottom make it difficult to wade, so you have to do your damage from different spots on the bank because believe it or not, these bass become well aware of your presence very quickly and won’t bite if they see or hear you. That requires a lot of sneaking around through the crinkling leaves and the crackling branches as you trudge down a bank to get in position for a cast. For this reason, make your best effort to stick to weedless baits or baits you can rig weedless. Considering the fish are spooky, those first few casts count most, and if you’re wasting time decorating the trees with lures and retying, you’re giving the fish more time to figure out that you’re there.