How to Build an AR Rifle for Hunting

Itching for a new AR to take afield? Save a pile of money, have more fun, and get exactly what you want by building your own gun 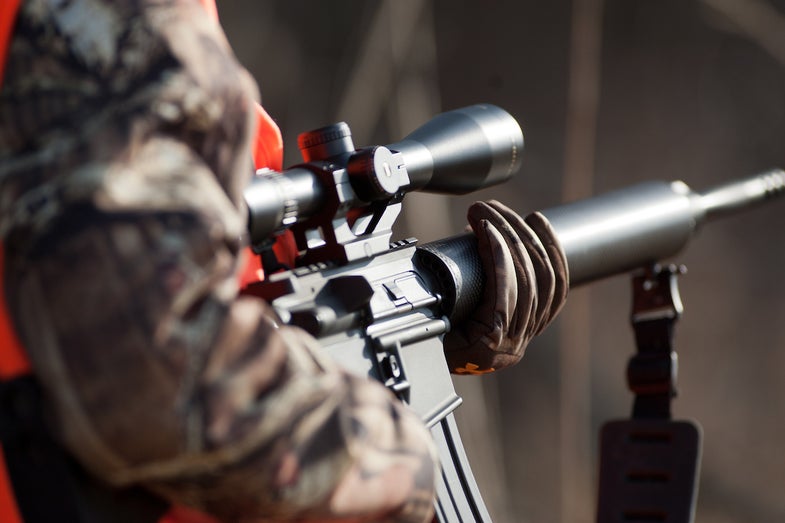 With a near endless combination of uppers, lowers, and accessories, the AR-15 is like a Lego set for gun nuts. Russell Graves
SHARE

For as long as rifles have been rifles, hunters have wanted them customized. Up until recently this cost more than breast implants and took surgeon-like talent. The modularity of the AR15 changed that. Now you can design and build your own AR, just the way you want it, and do it at home on the kitchen table.

You can craft a rifle dedicated to small game or predator hunting, or build one purposely configured for deer in the Eastern hardwoods. If you want one with more nationwide appeal, no problem. With its Lego-like modularity and claw hammer utility, “AR” could stand just as easily for “America’s Rifle” as anything. Here’s how you can build your ultimate hunting AR.

Conceptualize the rifle. Decide what its primary and secondary missions will be. This will determine the best cartridge for the job. The AR15 can be chambered for a wide array of cartridges, in calibers from .20 to .50. The missions you have planned for your rifle will dictate the calibers most appropriate for you.

After you decide on a caliber, you’ll need to choose a barrel length. Do you want a compact, fast handling rifle, or one a bit longer, ideally configured for precision shooting? This will determine the barrel length you need. You’ll need to select a gas tube and gas block suitable for that barrel, too. Here’s a tip: If you think you’ll want to use a suppressor, get an adjustable gas block.

You’ll need an upper receiver, and there are many types to choose from. Determine if you want to assemble this portion yourself, or purchase a complete upper receiver (which will include the barrel and gas block referenced above). The more assembly work you’re willing to do, the more options you’ll have—and the more money you’ll save. But, even a complete upper is still much less expensive than a finished rifle.

The only part of an AR15 controlled by the BATF is the lower receiver. Buy that through a dealer, even a “stripped” lower, and you’ll need to complete the associated paperwork and pass the background check, same as with any other firearms transaction. As with the upper, you can buy a lower fully assembled or in parts. Savvy builders will do their own work, save money, and learn about how their rifle works during the process.

Inside your upper and lower receivers are the parts that make the gun work. On the topside you’ll need a bolt and bolt carrier (collectively called the bolt carrier group), sized for the cartridge you’ve selected. Underneath you’ll need various pins and springs, and, most importantly, a trigger. Don’t skimp on the trigger. It is your primary interface with the rifle, and good ones cost as much as the lower receiver you install them into. The buffer tube, which is where the stock will be mounted, holds a heavy spring that is needed the cycle the rifle. Be sure to get a buffer tube designed for a rifle and not an AR pistol.

Financial advisors insist you buy stock, and your AR needs one too. The grip attaches to the lower, and the butt stock goes on over the buffer tube. The hand guard attaches to the upper. These are your secondary points of interface with the rifle. You can get a fixed stock, which is comfortable to shoot and a bit more traditional looking, but it also makes the rifle longer and heavier. Adjustable stocks give up some comfort for convenience and versatility. Hand guards can be heavy or light, and some are more compatible with accessories than others. This is where you really make the rifle your own by giving it personality and color.

For hunting ARs, avoid fixed sights integral with the gas block. The front post sight, especially, can interfere with your view through the optics. If you really want iron sights, folding back-up sights are the way to go—but to truly get the most from your rifle, you need an optic. Select your scope just like you would for any other rifle, but consider using quick-detach mounts to mount to the gun. That way you can quickly swap out multiple optics without (theoretically) losing zero. The combination of a traditional scope with a mini reflex sight, as shown, can be a good idea too.

Here’s where it gets fun. Do you need a light for whacking hogs or predators, or a laser for the same? Will you run a night vision device in front of your optic? If you want any of these your hand guard must have rails for mounting them. Also, consider an additional upper chambered for another cartridge. It’s easy to find an upper and modified magazines for the .22 Long Rifle cartridge, for example. Remember, with the AR’s modularity, one lower can be made into many rifles.

The tools needed depend on the extent of the assembly. If you build from scratch you can get all the tools—in kit form—for about a hundred bucks, though higher-end kits like the one shown cost a little more. Brownells.com will have everything you need. If you’re buying a completed upper and lower, the tool drawer in your kitchen is probably sufficient. The build can be a family project or you can steal away to your man cave for some quality alone time with your new little friend. Either way, it doesn’t take long; you can assemble a complete AR from scratch between breakfast and supper.

Personally, my ultimate hunting AR would be chambered for the .25-45 Sharps because it’s a cartridge that’s 50-state legal for big game. I’d go with an 18-inch barrel for added velocity, and stripped upper and lower receivers with parts kits to save money. I’d also select a Magpul buttstock, grip, and hand guard for their value and minimal weight. A two-stage Timney trigger and Swarovski’s Z8i riflescope would maximize my interface with, what I think would be, the ultimate AR primarily for deer but suitable for coyotes too.

The best part: I can build this custom hunting rifle in my garage, while the wife is watching Hell’s Kitchen, the kids are doing their homework, and I’m listening to Skynyrd, eating a Moon Pie, and drinking an RC Cola. If it gets any better than that, it’s probably illegal or ought to be.