How to Call in Late-Season Canada Geese 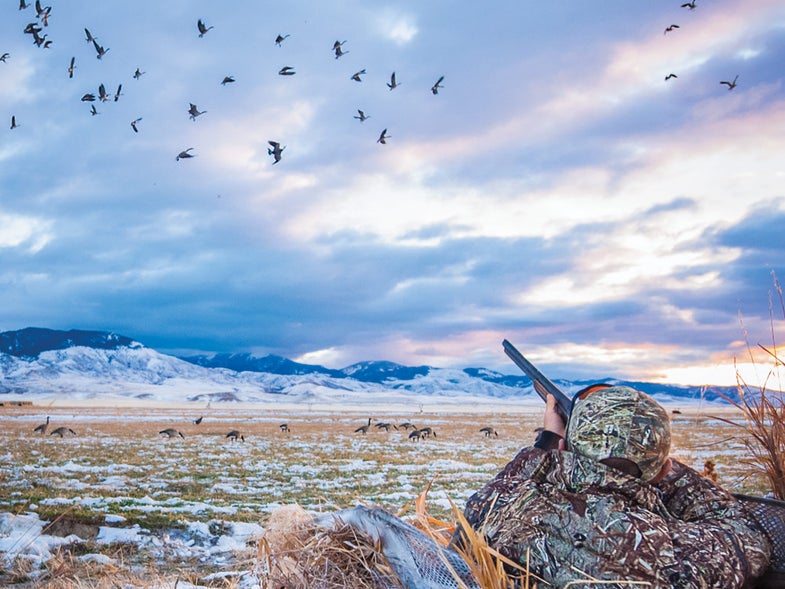 How wary are late-season geese? “I’ve seen them flare from a field full of live birds because a nearby clump of cornstalks looked too much like a hunter’s blind,” says Hard Core Decoys pro staffer Matt Ward. Avery pro ­Laurence Mauck adds that a single honk too many from you can send an otherwise committed flock sliding out of range. So how do you score on honkers this goosey? Here are the pros’ top tricks.

Scouting birds is critical now, and you want to mimic exactly what you’re seeing. But Mauck also scouts his competition. “These geese catch on to what other guys are doing fast,” he says. If they’re running big spreads of full bodies, he’ll try a smaller spread of silhouettes. If they’re all blowing short-reed calls, he’ll bust out a flute.

If you fire into a big flock, you’ll educate 50 birds to kill a few, says Mauck. “We shoot only at the smaller groups. If a big flock lands in the decoys, we’ll let them get comfortable, then we’ll let the dog out to push them off gently. Or we may ask the farmer to drive into the field.” And once you get your geese, get out quick. “All the birds that come to your field later will have no idea what happened earlier.”

“I watch guys struggle to kill birds in the fields now, so I hunt water a lot,” says Ward. After the morning feed, geese break up and head to water to loaf. “I’ll set up on a sandbar with two dozen full-body feeders, four dozen floaters, and a bunch of sleepers. Geese need grit as much as food and water, so look for spots with exposed sand or gravel, and set up right there.”

Late-season geese tend to be call-shy, so tone it down. “When I’m hunting water, where sound really carries, I like a lower-toned call like the Toxic ADM, and I stick to mostly soft clucks and moans,” says Ward.

If Mauck knows he’s in the right place, he may not call at all. “Other­wise, I use mostly ground clucks, light moans, and growls—and only when the geese aren’t facing me.”

Don’t keep hunting the same spots with the same spread, says Mauck. “Borrow some decoys, swap blinds with some buddies, or leave the blinds at home and hunker down in a ditch or natural vegetation. Do what you have to do to mix it up, because it makes a huge difference.”

A field will burn out in just a few days now if you don’t rest it, says Mauck. “You have to let geese get back into those spots and get comfortable before you hunt there again.”

With so much hunting pressure, geese get separated from their flocks, and breeding pairs get split up. “A long, drawn-out, lonesome honk will pull these birds in,” says Ward. “You want to sound like another bird that wants company.”

It’s typical to position layout blinds side by side on the upwind edge of the spread, and then surround them with decoys. But that creates a pattern that late-season geese quickly come to recognize from above, according to Mauck. “Pull your layout blinds out of the spread, or split them up, so they don’t make that pattern.”

Most goose hunters put the shooting pocket right in front of themselves. But in the late season, Mauck will set up crosswind and push the pocket to the downwind side. “This way, if geese flare at the last second or after you shoot,” Mauck explains, “they will use the wind to gain altitude, and instead of showing you their tails, they’ll cross broadside right in front of you.”