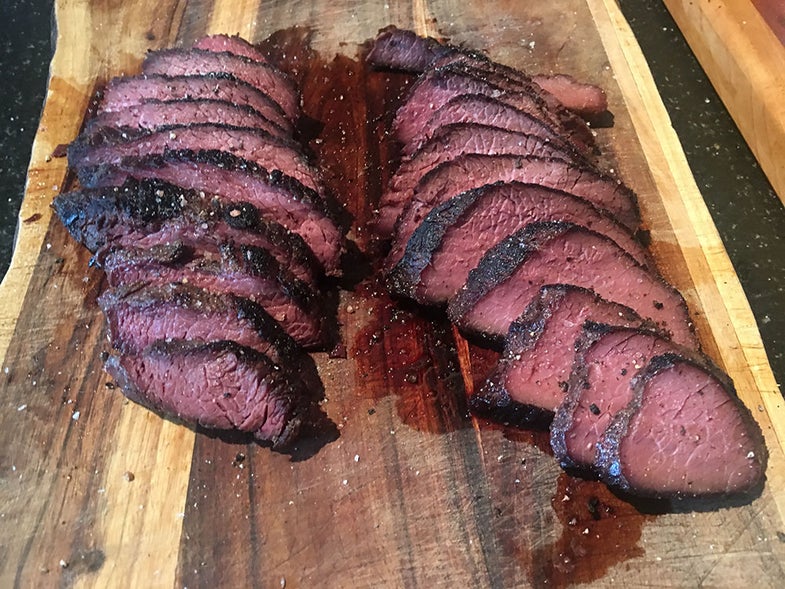 I’ve been conducting some kitchen experiments lately, and after a few tests I think I’ve got the secret to the perfect wild-game steak. A bold claim, I know. But hear me out.

Actually, before you hear me out, let me get a couple things out of the way:

Let’s begin with koji, the secret ingredient. Koji is a rice grain that’s been inoculated with a fermentation culture and is used to make stuff like soy sauce, mirin, and miso paste. If you want a deep dive on the science behind koji, here’s a good place to start. Otherwise, here’s the tl;dr version: The live culture in koji breaks down the carbs and proteins of, say, soybeans similarly to the way a steak breaks down when it’s allowed to dry-age in a temperature- and moisture-controlled environment. So, in theory, koji should be able to break down, or “age,” meat, too.

I’ve tried this recipe with black bear meat, venison, elk—all with great success. In the photos with this story, you’re looking at a bear backstrap (left) and a blacktail tri-tip (right). Start by unpacking the thawed meat, pat it dry, then set aside.

Take about a 1/2 to 3/4 cup of koji and pulverize it using a blender until the koji resembles a powder. Generously rub the koji powder on all sides of the meat. Set the meat on a wire rack and let it sit inside your refrigerator, uncovered, for three days. (I’ve experimented with koji-aging wild game for two-, three-, and four-day trials, and found three days to be the sweet spot. Two days is fine, too; just don’t go beyond three days. The four-day meat got a little hard, almost like it had cured.)

Here are the steaks after one day. You can see the powder has already absorbed into the meat somewhat, and the exterior looks a little drier. But, the meat is still moist and soft to the touch.

Day two: I’m not sure why the bear loin seems to have absorbed more of the koji than the venison. If I could do this one over, I’d rotate the rack in the fridge daily. Nonetheless, after just two days you can see, and feel (the exterior on both cuts has toughened) the effect the koji has had.

Finally, day three: The meat almost looks like it’s covered in mold—because, well, it basically is. But don’t worry, it all washes off easily. The “aged” steaks are now ready to cook.

Here’s a side-by-side comparison of the wild game before the koji rub was applied and after the meat had aged for three days. Night and day, right? Now you can get a visual sense of why you don’t want to go longer than three days. This stuff breaks down the meat fast.

If you’re working with wild game that’s fine to eat rare or medium rare, such as venison, you can simply sear the steaks in a skillet or on the grill until they hit the temperature you prefer.

But because I have some bear meat here, I had to be more careful with the cooking. Unless you take the trouble to have your black bear meat tested for trichinosis—which I did not—it’s safest to assume that your black bear meat has trichinosis. To kill trichinosis, you must cook the meat to at least 137 degrees all the way through. Just to be extra safe, though, I prefer to up that temperature to somewhere between 140-145 degrees. Trouble is, if I were to cook the bear meat in a skillet or on the grill, by the time the very center of the meat hit that trichinosis-killing temperature, the rest of the loin would be too well done for my tastes.

That’s where the sous-vide gizmo comes in.

Sous vide is French for “under vacuum,” and all you’re doing is cooking meat that’s been sealed in an air-tight bag in a warm-water bath that maintains the exact temperature you want your meat to reach. The upside to this cooking method is that your meat comes out perfectly cooked all the way through. The downside is it takes a long time. With this bear backstrap, for example, I set the device at 140 degrees, and let the meat cook for the better part of three hours. Yes, I realize that’s a long time—but the reward is a perfectly-cooked and safe-to-eat bear backstrap.

I have the Anova Precision Cooker, which was recommended to me by Phil Bourjaily. As he once told me, “Sous vide is so easy, it feels like cheating.” A sous-vide cooker is a game-changer for bear meat, and I use mine all the time with venison and gamebirds. I can’t recommend it enough.

This is what the meat looks like after it’s been cooked in the sous-vide bath. All that’s left to do is a quick sear in a scorching-hot skillet to get a nice crust.

Like this. Probably the best quality of the koji-aging process is the crust it gives you. The meat caramelizes and gets better color than an unaged steak and the texture and flavor is out of this world. Let the meat rest for about 10-15 minutes before you slice it.