How to Cut an Ice-fishing Hole Without a Power Tool 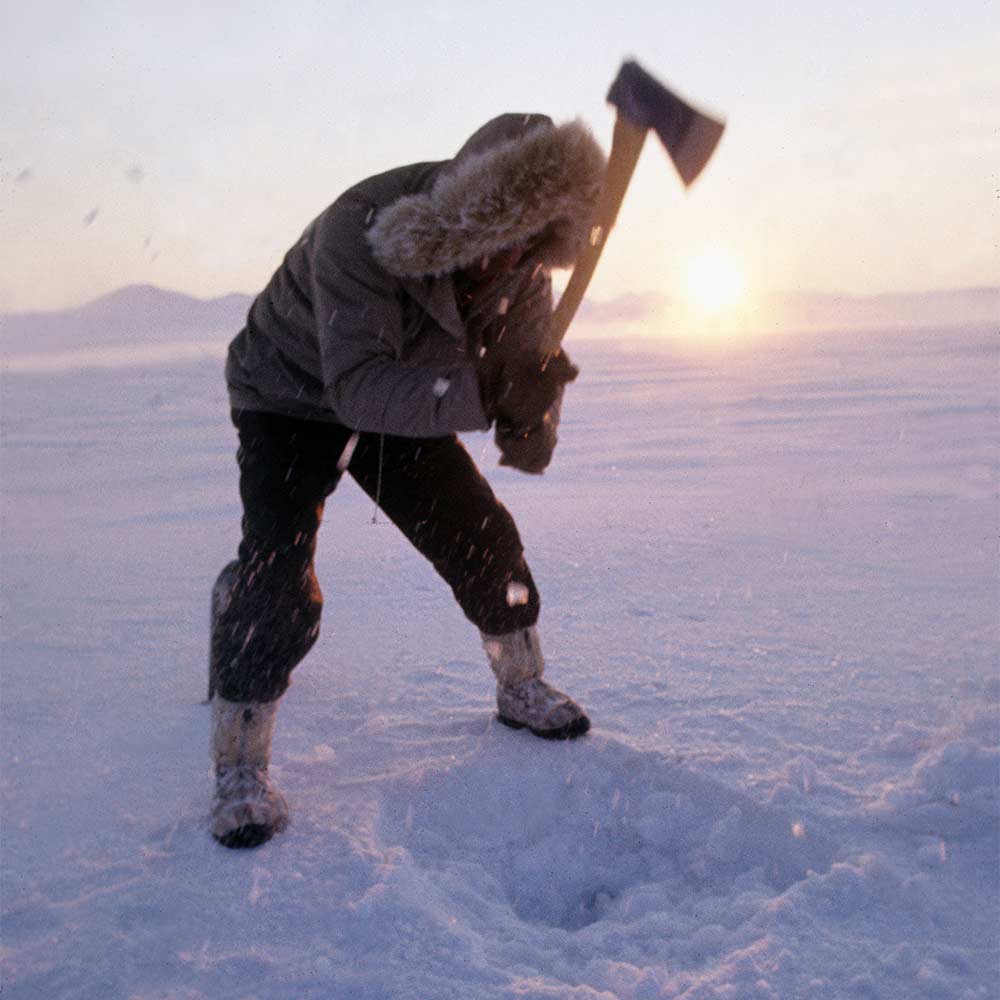 You can cut an ice-fishing hole with a sharp ax, but there are less-sharp tools that can help you achieve the same result. Alamy
SHARE

With every swing of the ax the ice splintered and cracked, sending whooping echoes beneath my feet that sounded like a Star Wars blaster. I remember thinking; “There’s probably a better way to do this.”

But that’s how we got through the hard-water. My brother would chisel through the ice with an ax, hacking at the slippery surface between his feet. Only now do I realize how lucky we were as kids. Without a power auger to cut through the ice, we had to improvise. Since then I’ve learned there are much safer alternatives and even if you don’t have a power auger—the go-to power tool of ice fishing guides everywhere—you can (safely) create a hole in the ice.

To help, here are a few tips from expert ice fishing guides on how to cut a hole that looks like a professional drilled it, without making a big dent in your wallet.

Use a Hand Auger

While the cost of a power auger may be out of your budget, especially if you’re just getting into ice fishing, a hand auger, available for around $50, can get you through the hard-water if you’re willing to power the drill yourself. Like hand cranking an early production combustion engine, hand augers feature an offset handle that lets you spin the drill with one hand, while the other hand holds the shaft steady.

A hand auger is how Dean Thielen, Nebraska ice fishing guide from DAB Fishing Guide Service, said ice anglers could start out on the cheap and easy.

“Ice fishing can be kept simple,” says Thielen. “You need a good six-inch hand auger like a Strikemaster Lazer auger, until the ice hits eight inches thick.” Thielen repeated the need to drill down as straight as possible. “It’s much easier to cut through when drilling straight,” he said.

Use a Spud Bar

Power augers can buzz through ice in seconds, but with an average cost of around $200 or more, they’re not for everyone. Thankfully, you can get through with a tool that costs a tenth of a power-auger’s price. A spud bar can get you through the ice for as little as $20.

Early in the career of New Hampshire ice fishing guide Tim Moore, he couldn’t afford a power auger. “When I first started I could afford a spud bar, which is a long bar with a hardened steel chisel on the end, designed to chop ice,” said Moore. “There are also a lot of fancy ones available now that hog out a huge amount of ice. It’s a cardio workout, for sure, especially when the ice is deeper than eight inches,” he said.

To chisel a hole with a spud bar, Moore recommends starting big.

“If you want an 8-inch hole, pretty fast you learn to start with a 16-inch circle,” he said. “Your hole gets narrower and narrower as you go, so drive as straight down as possible, in a circle to form a button. Then hit it at an angle to pop that button out, and repeat until you’re through.”

You can make your own spud bar with materials already lying around your house, or items available at a local hardware store.

“Some people make their own spud out of rebar,” Moore said. “They just sharpen one end into a chisel.”

If you construct your own spud bar out of a piece of metal, like rebar, create a handle out of rubber, parachute cord, or even a combo of duct tape and foam to protect your hands and gloves.

Use an Ice Saw

“Ice saws are awesome,” was the first thing Steve Thompson, who guides in Ely, Minnesota, said to me on the phone. After using the same saw for more than a decade, Thompson hasn’t ever needed to sharpen his blade. “I’ve had it for 10 or 12 years, and you don’t need to send it in to sharpen it. Just take care of it.”

“I’m very careful with it,” he said. “They tell you that you can use it as a chisel, to get the hole started, but I always bring a spud. After the hole is large enough to fit the saw, you can put the spud bar away. I don’t even have to take the slush out of it,” Thompson said. A four-inch hole is large enough to get the saw down into the ice, and then you start sawing from there.”

For Thomspon, using a spud bar by itself just takes too long, but with his saw, he can cut a hole through 10 or 12 inches of ice in less than five minutes, and he says others can to, as long as they use the right technique.

“After starting a hole with a spud, switch to your saw and angle the blade as you cut. To cut a straight line, you want to keep the blade at a 45- to 60-degree angle, not straight up and down, and make your cuts as you push the blade into the ice, not when you draw it backward,” he said.

“When you want to create a corner, that’s when you hold the saw straight up and down, and make slower, shorter strokes,” said Thompson. “Gently twist the saw with your hand as cut to steer it into an arc. Even the slightest amount of pressure should coax it through a corner. After you make a 4- to 6-inch half-circle in the corner, drop the saw back to a 45- to 60-degree angle, use longer strokes to use the full length of the blade, and cut another straight line to your next corner.”

Keep cutting until you’ve cut out a clean block of ice.

“Give the big block of ice a hit in the center with an ice chisel,” said Thompson. “Then push the two blocks under the ice and away from your hole, and you’re ready to go fishing.” The right saw angle is vital if you want to push the block under the ice for a clean hole. “Otherwise [the blade] will want to slope, and then those blocks will hang up and work against you,” said Thompson.

“Before you wet a line, spend a few minutes looking after your ice saw. Dry it off when you’re done, don’t let it become rusty,” said Thompson. “Mine doesn’t have any rust on it because I always make sure it’s completely dried.”

“I’ll fold it back over and put the pin in it so it’s locked shut. Then I’ll wrap it up in a towel sometimes, just to protect it, so I don’t have anything rubbing against the blade—ever.” Thompson said.

It turns out there are better ways to get through ice when you don’t have a power auger, and it’s nearly anything else other than an ax. I asked Moore about chopping holes with an ax, both to gauge his reaction and to measure how lucky my brother’s feet were back in the day.

“I don’t know if it’s not recommended, but I’d just use a spud bar,” he said, “With an ax, there’s going to be a point when the ice is too thick to keep chopping. It’s like trying to dig a hole with a shovel. At some point, you can’t get the dirt out, because there’s not enough room in the hole to keep going.”

Instead of risking your limbs, or your wallet, on new ice fishing power tools, use a little elbow grease and get on the ice before spring makes the season disappear.