How to Find, Clean, and Cook Fiddlehead Ferns

Everything you need to know to forage for fiddleheads this spring 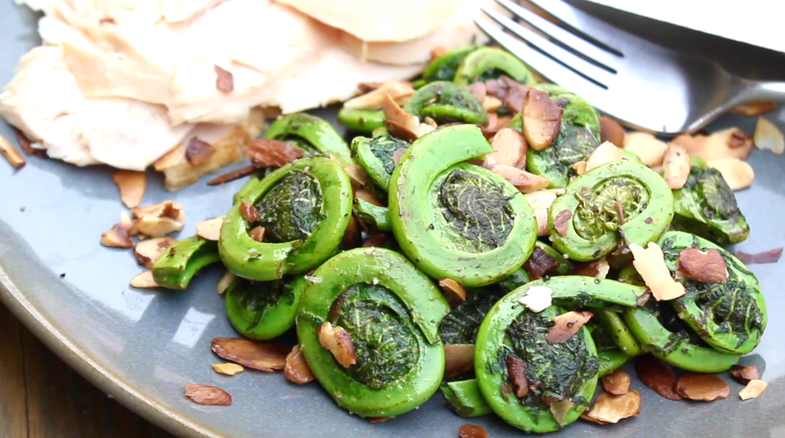 For most of us, turkey season is also fiddlehead season. So, while you’re tromping the woods—whether the hunting is slow or not—keep your eyes peeled for these ephemeral edibles. Why? Because they are delicious and because like so many things in spring (including Spring), they are here and gone. If you don’t grab fiddleheads while they are still fiddleheads, then…well, you get the idea.

You’ll find them along wooded creeks and on riverbanks and in moist woodlands. “Fiddlehead” does not refer to a species of fern, but rather a stage in the plant’s development, when the tender stalks have emerged but the fronds have yet to unfurl. That said, you don’t want to eat just any fiddlehead, as some species of fern are carcinogenic. The most popular for eating (and the only one I trust) is the ostrich fern, which is bright green, often with a papery-brown covering on the head, and a deep, U-shaped stem. If your timing is perfect, you’ll find them only a few inches tall and their tips tightly coiled, looking something like the heads—or scrolls—of so many miniature, bright-green fiddles (all buried up to their necks).

Read Next: A Beginner’s Guide to Hunting Morel Mushrooms

Pick only a couple heads from each bunch, and your hotspots will produce year after year. Clean them thoroughly before cooking. Most sources urge you to fully cook fiddleheads. Here’s a handy rhyme to help you remember: Raw ferns unfurled might make you hurl. I’ve never had a problem with al dente ostrich ferns (the most common fiddlehead variety), but that’s just me. If you’re worried, or inclined to blame me, sauté them for longer or blanch them for a few minutes first. Even cooked through (as long as you don’t overcook), they are crunchy and fresh, with a flavor that’s sort of between asparagus and green beans, but all its own—and only available now. Go get ’em.