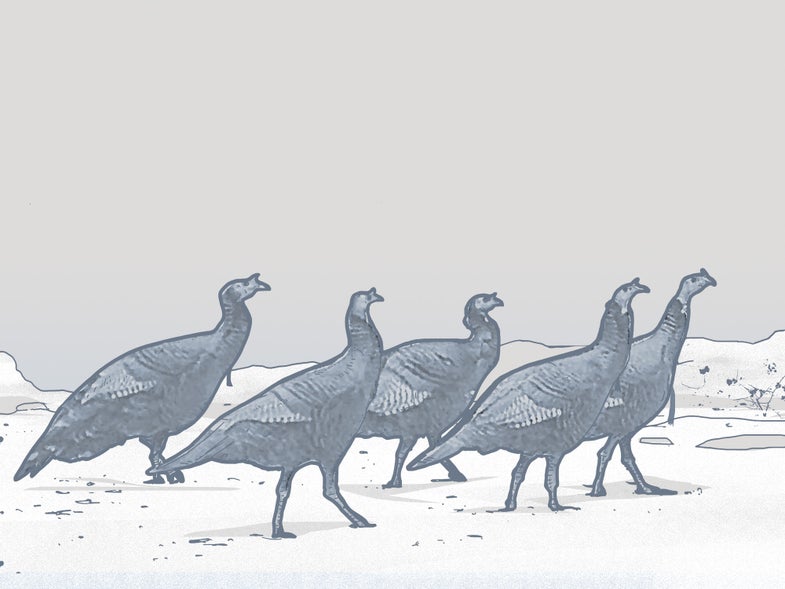 Early-season gobblers can be tough. Often, the birds are still gathered in large groups, and they do as much silent strutting as raucous gobbling. Competition from other hunters is high. Worst of all, freezing temperatures, stiff winds, and snowfall can spoil the outlook. But none of that is an excuse to sleep in. We posed three common early-­season challenges to three turkey pros for their best advice on killing a gobbler on opening week.

The spring forecast calls for 45-degree high temps, a stout north wind, and an inch of snow on opening day. What’s the plan?

Wallis: “The plan depends on your scouting. A flock might hold up a bit in bad weather, but sooner or later, they’ll make a move, and it’ll probably be the same pattern they were on before the weather turned.”

Culpepper: “The main challenge can be finding birds that go silent. Rather than call, I’ll do more glassing and slipping around. Turkeys will hit fields and sit tight, but if you can get eyes on one, you’re in the ballgame.”

Budz: “Still-hunting would be phenomenal in the snow. Use embankments and ditches to get close to a gobbler, and then charge right at him with a gobbler decoy and reap him.”

A winter flock of turkeys, with six strutters, is 200 yards away in a field you can’t hunt. How do you pull a tom into gun range?

Wallis: “Stay on them until late in the morning, when the flocks begin to break up. Then, get the hens really fired up with clucks and yelps. If you can pull a couple of them in, generally the whole flock will follow.”

Culpepper: “I’d use a box call to yelp and cutt as I walk a 30-yard circle to sound like hens feeding. If a tom gobbles back, call aggressively until you think you’re going to bust him, then shut up. That should break him off.”

Budz: “First, I’d call a raspy old hen by cackling, cutting, and yelping. She could break off and pull the whole flock your way. But if that doesn’t work, I’d show a tail fan and try some fighting purrs to intimidate the gobblers and entice them to come over.”

You roll up to your public-land spot, where you’ve heard a tom hammering, to find three trucks at the pull-off. What’s next?

Wallace: “You’ve got to beat that scenario by not being the fourth truck at the pull-off. But worse case, if a guy is in your spot, set up a safe distance away on the opposite side of the roost and call at the birds hard as they come down.”

Culpepper: “I would let those boys have at ’em and not waste my time trying to figure out a plan. You can always go find another turkey. But I’d come back later that day and try to get the tom fired up in case those other guys didn’t get the job done.”

Budz: “Shame on the hunter who scouts next to the road on public land. That said, that bird is smart, and if those guys hammer him, he’s going to shut up. So by midmorning, those guys will probably leave, and you can move in.”

Wallace: “Not being patient enough. If you patterned the birds, you just need to wait. Don’t try to hit all your spots as quickly as you can.”

Culpepper: “People expect turkeys to be screaming in the early season, and when they aren’t, they give up. But turkeys are strutting that time of year. Let a tom settle down until he’s willing to come in to a call.”

Budz: “Moving locations too much and moving at your location too much. If you just sit still and throw out some calls every 20 minutes, you can kill a bunch of turkeys.”