How to Install a Pic Rail—the Right Way

With enough shooting, a barrel-mounted Picatinny rail will come loose if you’re not very careful (and maybe even if you are) 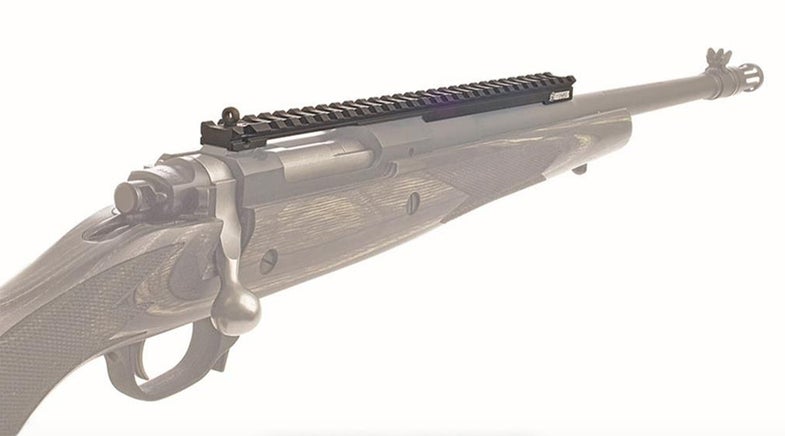 One of the disturbing items of information to come up in Richard Mann’s book on Scout rifles (which was reviewed here on March 12) is the tendency of Picatinny rails that are mounted on rifle barrels to come loose. If your rail comes loose, and the rail has a scope on it, there’s no telling where your bullets will hit. Richard mentioned the Ruger Gunsite Scout Rifle (or GSR) in particular, but there’s no reason it can’t happen to any other rifle with a barrel-mounted rail.

Here is a short excerpt:

It might take 20 shots; it might take 200; it might even take 2,000, but that rail is going to come loose and you cannot put enough Loctite on it to stop it from eventually happening.

As a bullet passes down a barrel, the barrel microscopically swells, whips, and vibrates. It also heats up substantially under sustained fire. Over time—an unpredictable time—this will cause the screws holding the rail down to work loose. It is, as they say, like death and taxes, a fact of life.

Seized by panic (as I own two GSRs), I e-mailed Richard and asked what gives, and he added this:

“The rails I’ve seen that have not come loose are on guns that have not been shot a lot, or at least not shot repetitively over a short amount of time. It’s a combination of the heat and vibrations that seems to be the culprit.

“I think with casual shooting, a rail will hold on a long time; hell, maybe forever. I also think few people put them on correctly to begin with. They either use no Loctite, or tighten screws not enough or too much. I shoot Scout rifles like I shoot an AR, and the barrels get hot. Rails don’t like that, particularly when they’re attached to the action and barrel.

“A mistake some make is to shoot their rifle and check the rail by trying to tighten it even more. This aggravates the problem by breaking the seal the glue provides.

“I can tell you this: I have yet to see an XS rail work loose that I mounted on a gun. Red Loctite and 30 inch-pounds. If you shoot in a recreational manner, I’d not give it a second thought—until I missed something, and then I’d blame it on the rail.”

The XS rail to which he refers is an aftermarket rail that is the bee’s knees and the cat’s meow, and which I have on both my GSRs. It extends from way up the barrel down to the rear end of the receiver, and is held in place by five screws. In addition to looking extremely cool, it allows you virtually limitless fore-and-aft scope positioning, and also lets you keep the rear ghost ring sight in place when your scope is mounted.

I think Richard is right when he blames casual rail mounting. I’ve seen a great many rails, and Weaver-style bases, that were installed by people who were thinking about something beside their job. Prudent gun buyers are advised to remove all rails/bases, degrease the screw holes, degrease the screws, and then torque them in with the proper amount of force.

This will suffice for bases/rails that are mounted on receivers. For the barrel-mounted kind, use Loctite. XS supplies blue Loctite with their bases. For those of you not familiar with the stuff, there are two varieties: Blue, which will hold most screws under most circumstances, and will often allow you to remove a Torx (What other kind is there?) screw without the use of heat. Red Loctite is for permanent installation, such as a flash hider or muzzle brake. Removing it usually involves the gentle caress of a blowtorch.

There is another glue of which you should be aware. Flexbar Rocksett is the nuclear option. It sets up very quickly, and is good from minus 350 degrees to 2,015 degrees F. (If you heat your barrel up to 2,015F I suggest you let it cool a while.) Once you use Rocksett, there’s no going back.