Shoot to Recruit: How to Introduce New Hunters at the Range 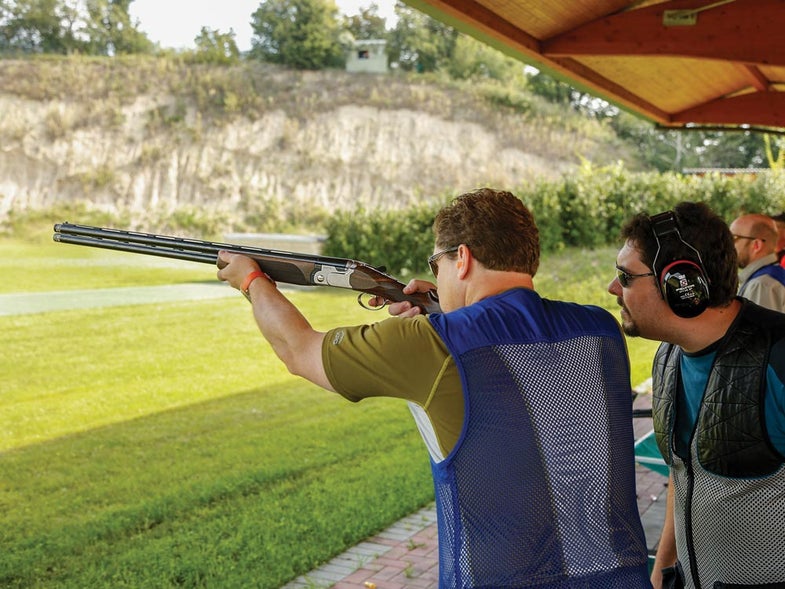 Head Down: Make sure your student's head stays on the gun through the shot.. Dusan Smetana
SHARE

Last September, I had the pleasure of watching my friend Rachel, a local-food advocate and former vegan, fold the first dove she’d ever shot at. I was doing my part to bring a new hunter into the field, as we all should. License sales declined by 2 million from 2011 to 2016 as more baby boomers hung up their guns. We’ll dwindle away unless we recruit new participants. The good news is that wild meat is local, healthy, and a thing right now. Plenty of adults like Rachel will kill to try it. Find one, a friend or co-worker, and help them become a hunter.

Hunting lessons begin with shooting lessons, and a skeet field or sporting clays course makes a perfect classroom. The right portable trap can work too. Keep lessons light all around: light in tone, light on recoil (gas guns and low-­recoil loads), and light in workload. Fifty shots per session are enough. Here are the four key lessons you need to teach and how to teach them.

Start your student with the gun pre-mounted. Make sure they stand quartering toward the target, with more weight on the front foot. Encourage them to push their head forward, keeping their eyes level and looking down the rib. Explain that the gun only shoots where they look if their head stays in the right place.

What to watch for: Most new shooters want to tilt their head over the stock. “Turn your nose into the stock” is a good piece of advice to help them keep their eyes level.

Lesson No. 2: Smash some Straightaways

Start with simple, going-away targets to get your new shooter comfortable with the gun. But not too many. Straightaways are too easy to hit by aiming a motionless gun, so you want to progress to targets that require gun movement as soon as possible.

What to watch for: Monitor the student’s head to make sure it stays on the gun until after the target breaks.

Lesson No. 3: Crush the Crossers

I use low-house 2 and high-house 6 on the skeet field to introduce crossers. These targets don’t require much lead and give students plenty of time to react. Emphasize a hard focus on the clay, not the bead, and moving in time with the bird. Avoid speaking of lead in terms of feet, which encourages aiming and measuring. I tell students to miss in front. Once the target explodes, they get the idea.

What to watch for: The muzzle tells all. It should move smoothly and uninterrupted to the target. If it stops, the shooter looked at the bead to check the lead. If it slows, they’re measuring lead. If it jerks, they’re panicking to get the gun in front, or the bird took them by surprise.

As soon as your student is able, have them do all their shooting from a low-gun start. Once they see the target, the first move is to push the gun’s muzzle out, so the buttstock clears clothing, and in the direction of the target. Then the gun comes up to the face and shoulder—not the face down to the gun. Stress that the mount be smooth, not fast.

What to watch for: Track the hands. Most people want to whip the gun to the shoulder, then find and chase the bird. They need to see the bird first, and then move the muzzle toward the target as if they were trying to bayonet it.

This last lesson is also the time to rehearse safe field carries and taking the safety off quickly while mounting the gun. The final thing to watch for you’ll see later, in the field: a smile when the lessons pay dividends.

Champion’s Wheelybird 2.0 improves on an already excellent value in a portable trap. I’ve had an original Wheelybird for several years, and it’s been nothing but reliable and trouble-free. It holds 50 clays and can throw them 55 yards. It features adjustable throwing height, and it’s light and easy to transport. The new version has several upgrades, including bigger wheels, a rubberized handle, faster cycling time, and a sturdier target magazine. It now includes a wireless remote release as well, so you can practice all kinds of angles, even by yourself.